THE TRUTH ABOUT PHONICS THAT WILL HELP YOU HELP YOUR CHILD! WHOLE LANGUAGE: A FRAUD PERPETRATED UPON OUR STUDENTS. ONE OF MANY?

With about fifty percent (47%) of Bay District Schools students unable to read proficiently there is still a very big problem. How many of these children are labeled Learning Disabled? How many are teaching disabled because they are still using a failed method of teaching reading. And why?
If John Winston could take a 98%minority school that served 3 housing projects in Natchitoches, Louisiana (Parks Elementary) and bring the usual 40 learning disabled to one or two and end disciplinary problems merely by changing the reading method to the Spalding Writing Road to Reading (an effective Phonics program) why would Bay District Schools hesitate?  Too much invested in the old method? (Dothan's excuse in 1992).

I found this entertaining and informative...I hope you do as well.  Sharman

But most of all, thank you for my wife. The other day she and I were riding along the highway and saw a sign for a town called Verona , so my wife read "Veronica". It's very simple, you see. First she applied Context Clues (she knew we were looking for a name). Then she applied the Initial Consonant ("V"). Then she applied Prior Knowledge (she already knew of a name "Veronica"). She put these Whole Language strategies together and ... success! At least, as much success as we can expect, I suppose.

Thank you William S. Gray for inventing "Look-Say" and the "Dick and Jane" series of basal readers. Thank you A. Sterl Artley for helping Mr. Gray and for your phonics-bashing diatribes of the 1950s and 1960s. Thanks to the National Education Association for giving Mr. Gray and his friends two years of free promotion in the NEA Journal in 1930 and 1931. Together you all had managed to essentially eradicate phonics from America 's public schools by the 1950s and early 60s, when my wife went to school.

But more importantly, thank you for my wife. Awhile back she was reading a pamphlet about something that was described as "venerable". Now that's a word you don't see every day, so what did she do but cleverly pull out her Whole Language skills? Context Clues, you see, told her that she was looking for an adjective. Next was the Initial Consonant "V". Then out came the Prior Knowledge -- she simply thought of an adjective she already knew that was about the right length and started with "V". And voila ... success again ... she came up with "vulnerable". Perfect! Well, at least as perfect as things get in publik ejukayshun, right?

Thanks Kenneth Goodman for reviving the floundering Look-Say, adding a few New Age twists and renaming it Whole Language back in the early 80s. Just like the Whole Earth Catalog and Whole Grains and everything else that was Whole ... what else could it be but wonderful? Without you, Kenneth, the evils of phonics might have returned, and then where would we have been?

Thank you Dorothy Strickland for "Emerging Literacy" -- the idea that kids are naturally inclined to read if only we will surround them with literature. Thanks to all the other Whole Language textbook authors who cranked out textbook after textbook that either omitted phonics entirely or disparaged phonics openly. Thank you Teachers College, Columbia for promoting Whole Language to teachers' colleges worldwide. Can you even imagine how effective you were in eradicating phonics instruction throughout the English-speaking world?

Thank you International Reading Association (IRA) and National Council of Teachers of English (NCTE). For decades you appointed people like William S. Gray and Kenneth Goodman to lead your entire organizations in the fight against phonics. Somehow you raised hundreds of thousands or perhaps millions of dollars to pay PR firms to get their opinions so heavily quoted in the press that the public is now completely confused in its ideas about what works and what doesn't work in reading instruction.

But once again thank you for my wife. Awhile back she was reading about some Congregational Church. And do you know, even with the Context Clues and the Prior Knowledge (about what names churches might have, presumably) and the Initial Consonant, she still managed to come up with "Congressional Church". Even though this was years ago, I remember it like it was yesterday.

Thank you Alfie Kohn and Dennis Baron and Mike Ford and Gerald Coles and Harvey Daniels and Gerald Bracey and Susan Ohanian and Stephen Krashen and Jim Trelease and all the other propagandists who lash out continuously against successful practice in general and phonics in particular. Through your tireless efforts, the public is continually misinformed. Without the public's perpetual state of confusion and misinformation, Whole Language would not have survived a single day. Thank you for keeping Look-Say and Whole Language and Balanced Literacy alive to create yet another generation of people who can read as well as my wife does.

Speaking of my wife, last night she was reading a brochure aloud about a museum with an "eclectic" collection, and what do you suppose she said? You guessed it (and so did she): "electric"! Maybe the absence of the Initial Consonant threw her off.

Thank you Marie Clay for inventing the phenomenally expensive Reading Recovery, a program installed in virtually every public school, it seems, and designed to treat the educational effects of Whole Language by applying yet more Whole Language. Thank you for giving my school district more stuff like this to spend my tax money on. How is it that I am not clever enough to imagine things like this?

Thank you Richard Allington, current (2005) president of the International Reading Association, for your campaign of misinformation against Direct Instruction (a successful phonics-based program). The cleverness of your propaganda puts the Soviets, the Chinese Communists, and all the other tyrants of the 20th century to shame. You know of course that Direct Instruction (DI) participated in a huge study (Project Follow Through) in which all the participants except DI failed, and in which DI succeeded brilliantly. And so you twist this around to say that by virtue of its association in this study with the constructivist-favored instructional styles that failed so miserably, we should all conclude that DI must necessarily also have been a failure. Your logic, so typical of that of the IRA, the NCTE, and the rest of the Constructivist Cabal, is irrefutable.

But once again thank you all for my wife. Hardly a day goes by when she does not demonstrate the success of Look-Say, or Whole Language, or Balanced Literacy or whatever you all call it now. Really, it's so amusing I really can't even quantify it. I never know what she'll read next ... and neither does she! Just imagine all her Miscues!

The sheer unpredictability of listening to her read is astounding ... and unpredictability is the essence of entertainment, right? I mean, she might read "deleterious" as "delicious" or perhaps "injurious" as "injustice" or "parabola" as "parachute" or maybe "quintessence" as "quintuplet", or "signify" as "signature". I could go on and on almost endlessly. The laughs just never stop here. And all thanks to you. All of you.

So thank you, Whole Language. Where would we be without you? The possibilities just boggle the mind. 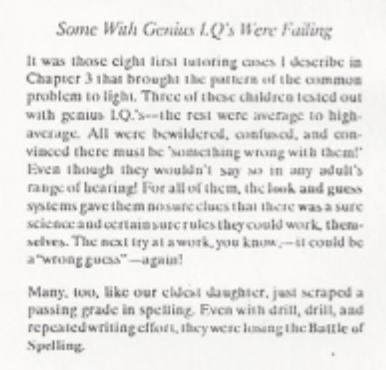 This is so important for parents with children having problems learning to read to understand.

Margaret McEathron tells you how her involvement in Reading Reform began:

Three of these children tested out with genius I.Q.'s-- the rest were average to high average. All were bewildered, confused, and convinced there must be "something wrong with them!" Even though they wouldn't say so in any adult's range of hearing! For all of them, the look and guess systems (Look Say/Whole Word/ Whole Language/Eclectic/We Do Teach Phonics Pretenders) gave them no sure clues that there was a sure science and certain sure rules they could work, themselves. The next try at a word, you know--it could be a "wrong guess" -- again.

Many, too, like our eldest daughter(McEathron's), just scraped a passing grade in spelling. Even with drill, drill, and repeated writing effort, they were losing the Battle of Spelling. 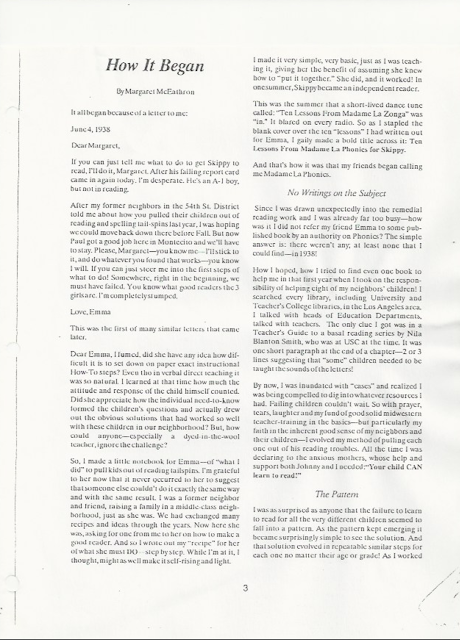 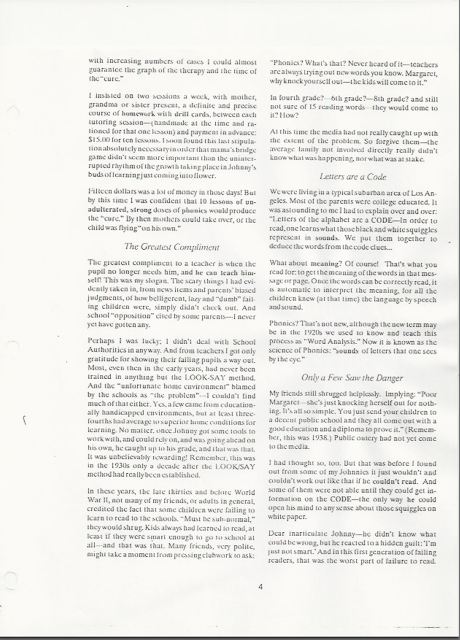 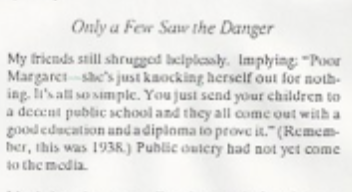 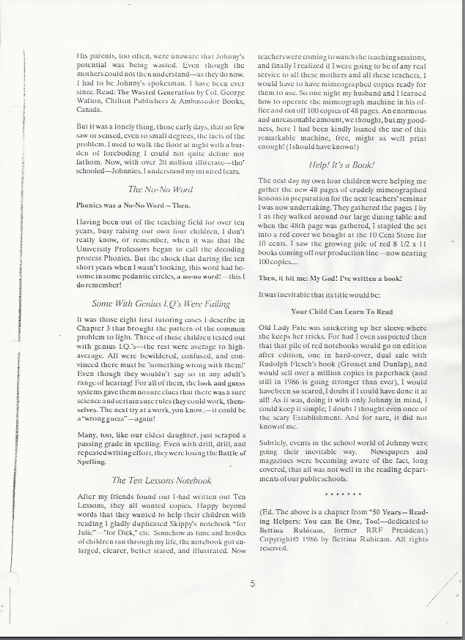 The Epidemic of Reading Disabilities 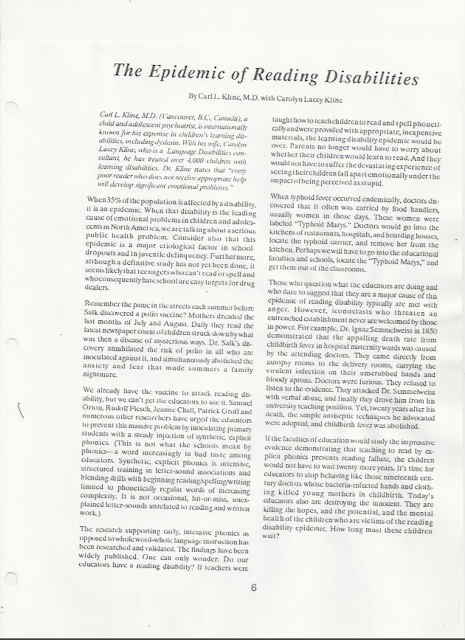 Very important. I remember volunteering at an After School Assistance Program run by Marla Newman, wife of Malcolm Newman, a prominent Black attorney in Dothan, Alabama. There was a precocious Black boy who wanted to get through with his homework quickly. He had to write his vocabulary words several times. He misspelled the words the first time and, of course, could not sound it out. The position of letters in the word meant nothing to him. The letters were all there but not in the order that made the word he meant to be writing. Bless his heart. Not only had it not dawned on him that reading ran from left to right across the page, but that letters went together to make sounds that made the word.

Read the article below to understand how this happens. 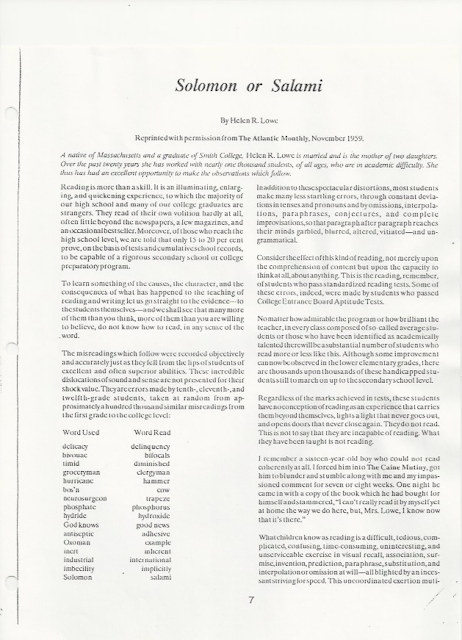 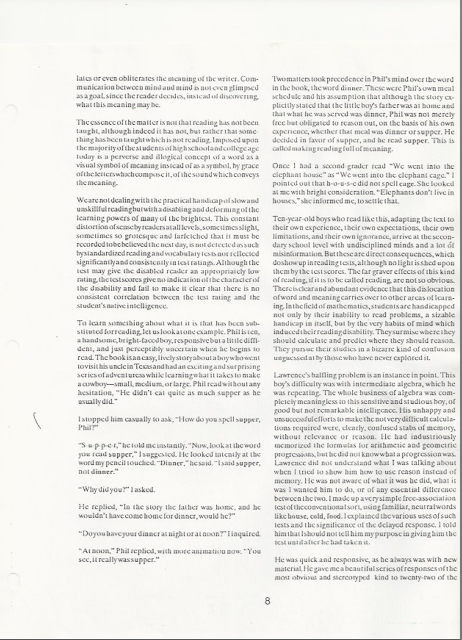 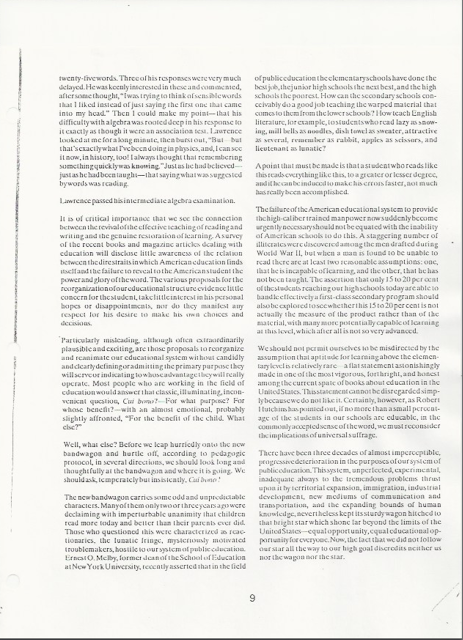 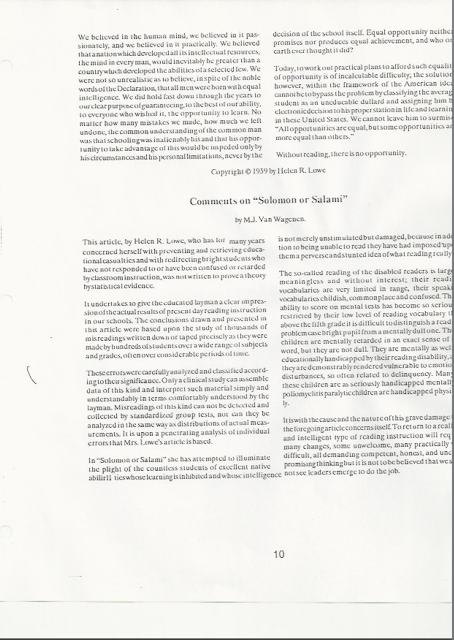 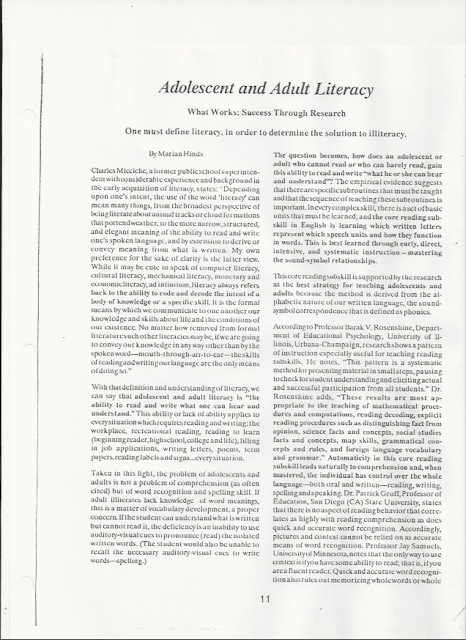 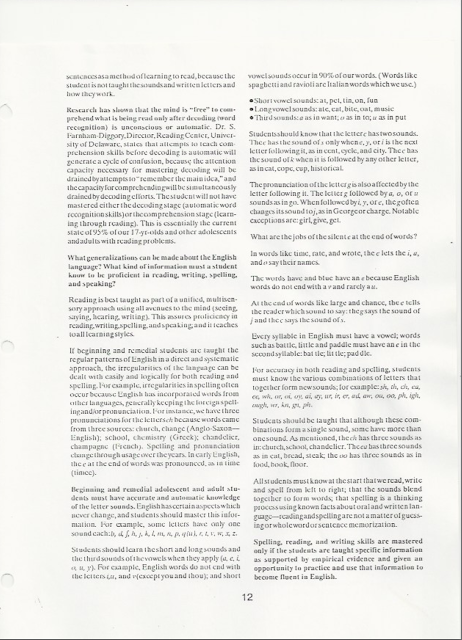 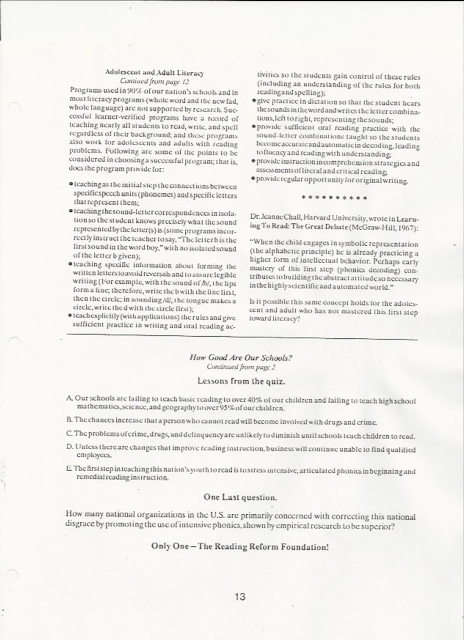 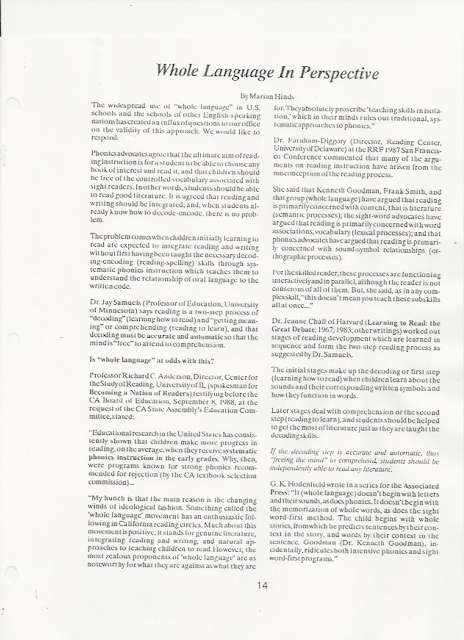 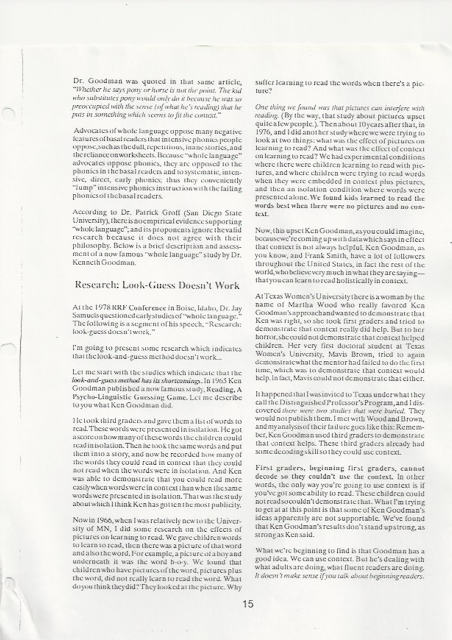 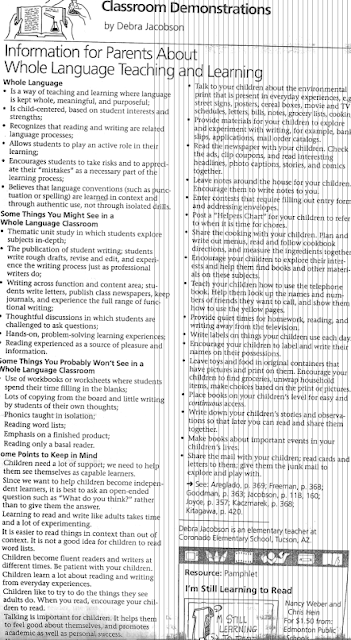 "Pioneer of the Whole Language Movement. He developed his work in the context of the October Revolution. With his distinguished disciples and colleagues A. R. Luria and A. N. Leontiev, he founded the sociohistorical school of psychology. Inspired by the writings of Marx and Engels..." 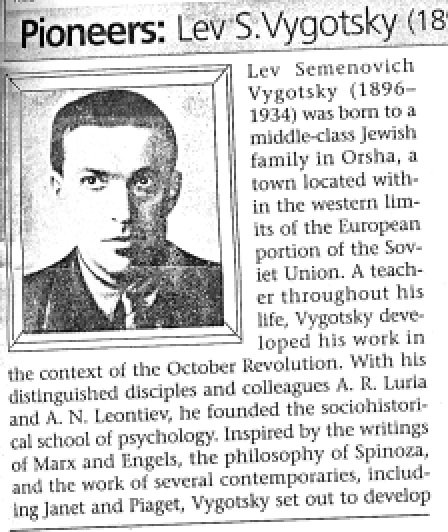 Probably more than any other psychological theorist Vygotsky assigned great prominence to formal education. He regarded schools (and other informal educational situations) not only as central contexts for enculturation and mastery of society's key tools and technology (such as written language and mathematics), but as the best "cultural laboratories" to study thinking: socially and historically created settings, characterized by special modes of discourse, and specifically designed to modify thinking. 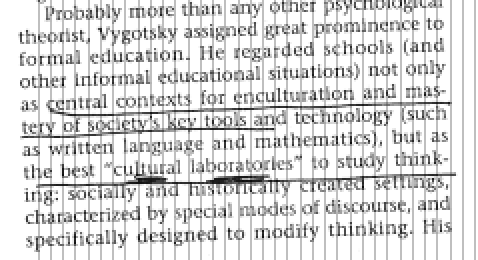 Vygotsky regarded education not only as central to cognitive development, but also as the quintessential sociocultural activity. Although he was clearly interested in how thought developed phylogenetically and socio-culturally, his work focused primarily on the social origins and cultural bases of individual development. He argued that uniquely human psychological process developed in children through social enculturation; through the acquisition of society's technology, its signs and tools and through education in all its forms. 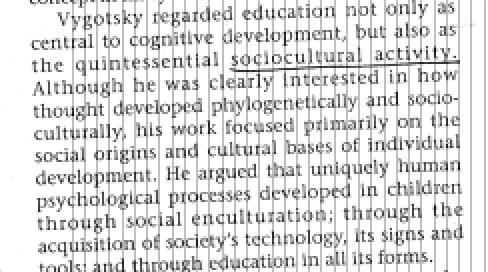 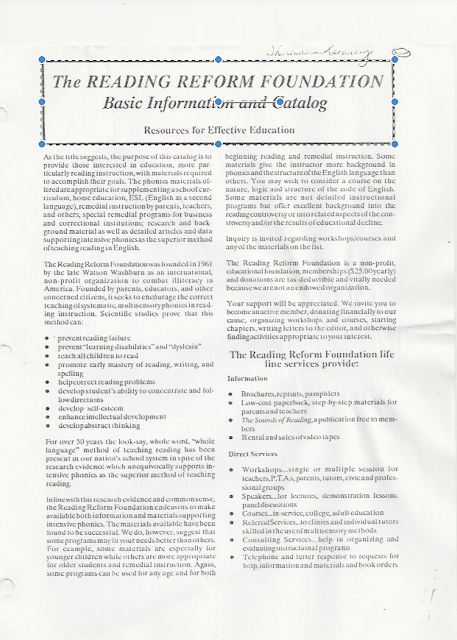 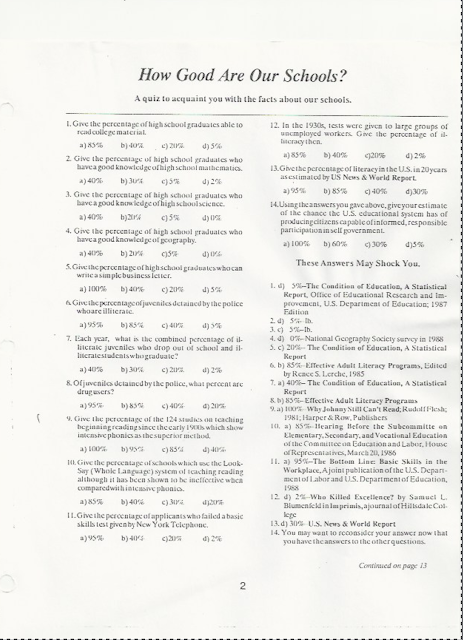 Remember this was the 90s. With Common Core it is SO VERY MUCH WORSE. 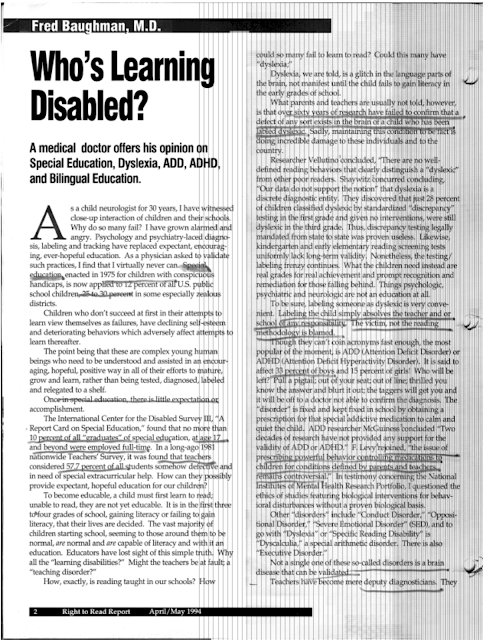 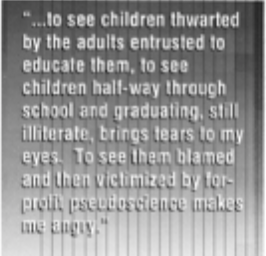 "New research prompted by our burgeoning national illiteracy (American Psychological Association, August, 1993) warns that an "educator should avoid relying exclusively on whole language techniques." Suspecting now that the whole language may, in fact be a barrier to literacy, they just might be willing to allow children some use of phonics some sounding out of letters and words, but by no mens will they temper their belief in "whole language methodology."

So true. Read the Whole Language catalog excerpts. It is incredible that we have fallen for their Radical Education processes that REALLY CONSTITUTE THE WHOLE LANGUAGE/PROGRESSIVE AGENDA (COMMON CORE). 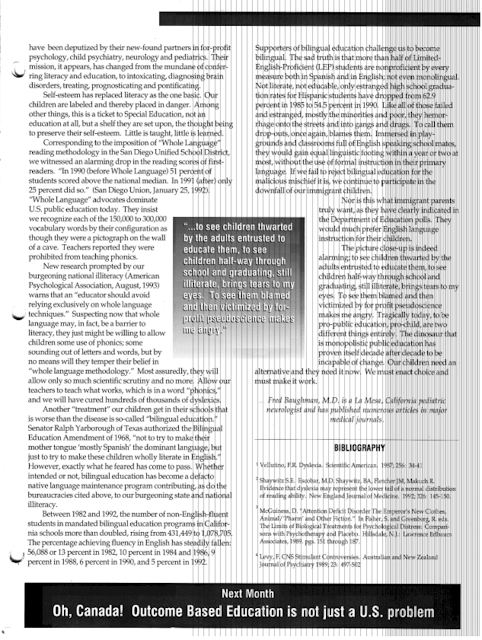 
FREE OUR CHILDREN FROM THE OPPRESSION OF COLLEGES OF EDUCATION. CHICAGO. TWO DIFFERENT PHILOSOPHIES.
https://sharmanbursonramsey.blogspot.com/2017/12/free-our-children-from-oppression-of.html

Posted by Sharman Ramsey at 9:21 AM
Email ThisBlogThis!Share to TwitterShare to FacebookShare to Pinterest