SECULAR HUMANISM IS THE ESTABLISHED RELIGION OF PUBLIC SCHOOLS:
A Debate among Facebook Friends

2014: A federal judge in Oregon ruled that secular humanism is a religion.

The following conversation followed the announcement that the Trump Administration is taking 3 steps to Boost Religious Freedom.

My friend, with whom I shared this discussion then stated boldly, "We will not allow Americans to be bullied by fascist Christians. Pray whenever and wherever you want. But don't you waste one second of public school kids' education time with your nonsense."

I have many questions here.

1. Who is the "We" he refers to who will not allow Americans?
2. Are Christians not Americans? Why must they be held captive to the beliefs of the Secular Humanists amongst us?
3. "Fascist"??????
Merriam Webster Dictionary Definition

Fascism definition is - a political philosophy, movement, or regime (such as that of the Fascisti) that exalts nation and often race above the individual and that stands for a centralized autocratic government headed by a dictatorial leader, severe economic and social regimentation, and forcible suppression of opposition.

Why does it look to me as if this post by my friend who says "We will not allow Americans does not include me? Because he labels me as a fascist Christian.

Yet, all I am asking for is the privilege of getting my child educational opportunities out from under the statist rule of the Secular Humanists. 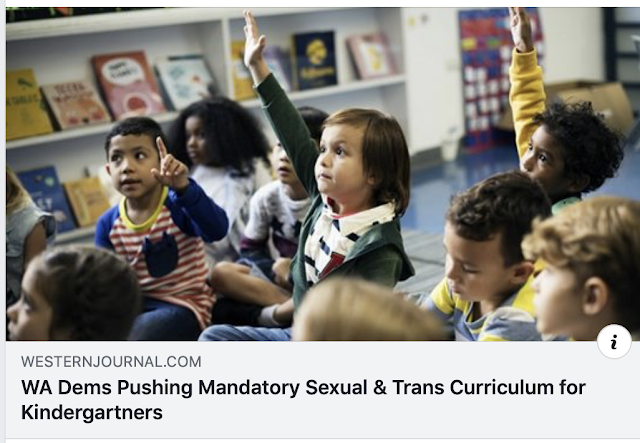 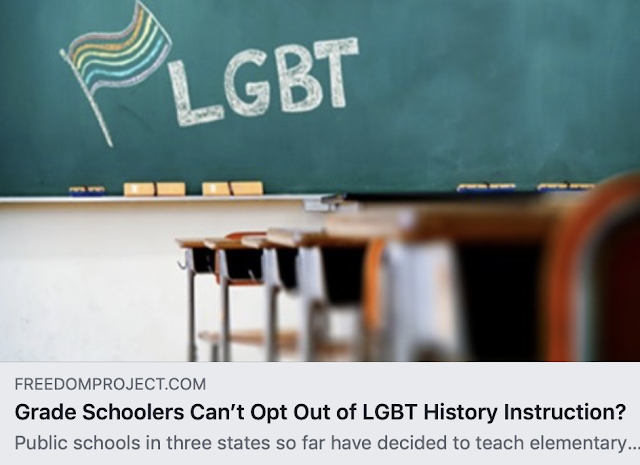 Mike Stone What’s wrong with LGBTQ history? They have one, don’t they? Maybe studying their history will teach your kids tolerance.

What is their argument?

Mike Stone The wall of separation between church and state requires a bright-line rule: No public money to any but public schools.

Sharman Burson Ramsey No. It does not. Public schools were not in existence when the Constitution was written. That did not come to be until the Northwest Ordinance. The Constitution only says there will be no establishment of religion. Yet there has been establishment of Secular Humanism as the religion of public schools. As a consequence violence has Increased and morality declined. You are only advocating for your own religion. Money should follow the child whose parents should have the freedom to choose the school with the curriculum they approve so long as it does not encourage violence.

Sharman Burson Ramsey You are advocating a monopoly proselytizing YOUR religion! https://en.m.wikipedia.org/wiki/Torcaso_v._Watkins

Sharman Burson Ramsey Freedom of speech and religion have been stifled while secular humanism is promoted in public schools. You approve because that agenda is your agenda. Of course you approve. Those of us who disagree must spend our children’s college money getting our children a good MORAL basic education. Yet not only do some people think we should support failed public schools but should pay their exorbitant college loans to universities that only teach contempt for those who pay the bills and sacrifice themselves paying for their own children’s early education rather than sacrificing them to the whims of the liberal agenda.

My friend makes exceptions for other religions 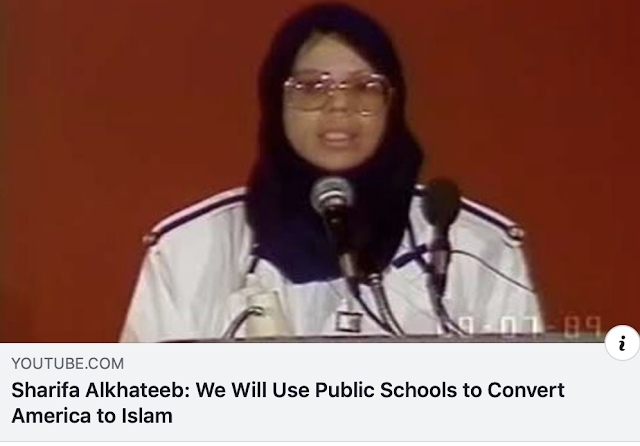 Listen to this Muslim feminist leader address the Fairfax County, Virginia Board of Education. It is alright for Muslim leaders to enter into the arena of the "public" schools. Just not Christians? 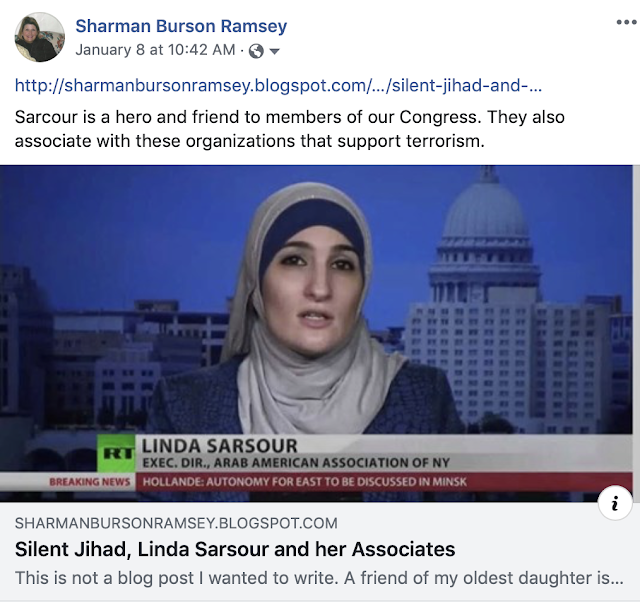 Yet, this is also to be taught in Public Schools.

What is the consequence of all of this politicization of the classroom? 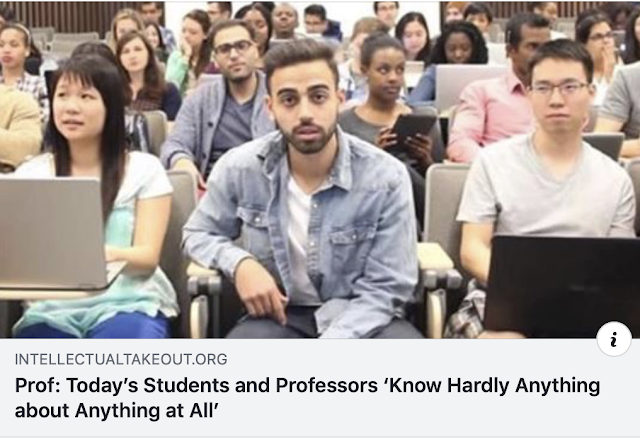 Today's students and professors 'Know Hardly Anything about Anything at All'. And that is why Christian parents flee the public schools. Secular Humanism has resulted in a know nothing society vulnerable to shape shifting according to the whims of the ruling elite.

Common Core led the way for ONE CURRICULUM THROUGHOUT THE COUNTRY for all children. Secular Humanism won the day. 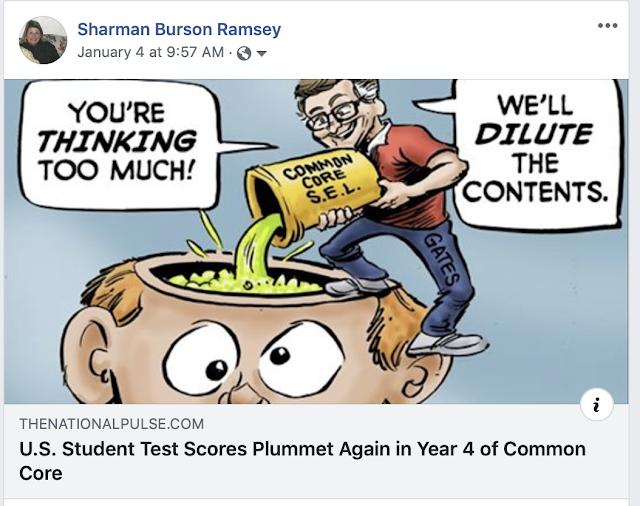 As a consequence, U. S. Student Test Scores Plummet again in Year 4 of Common Core. 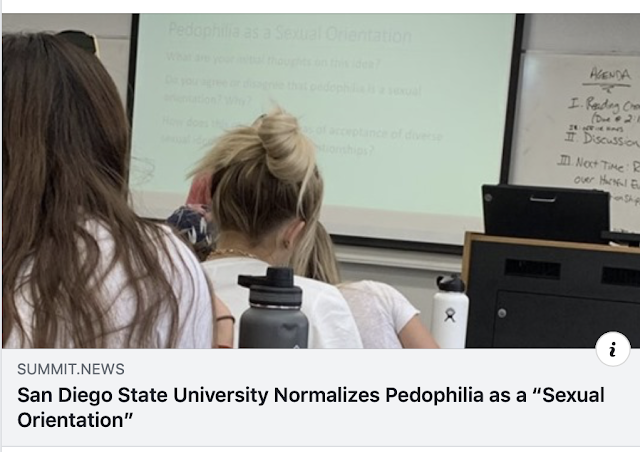 San Diego State University Normalizes Pedophilia as a "Sexual Orientation". That is great for future teachers to think of their students. 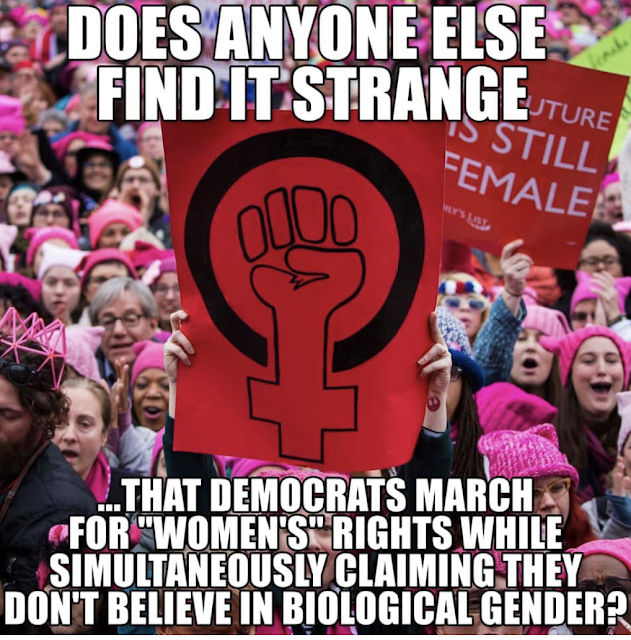 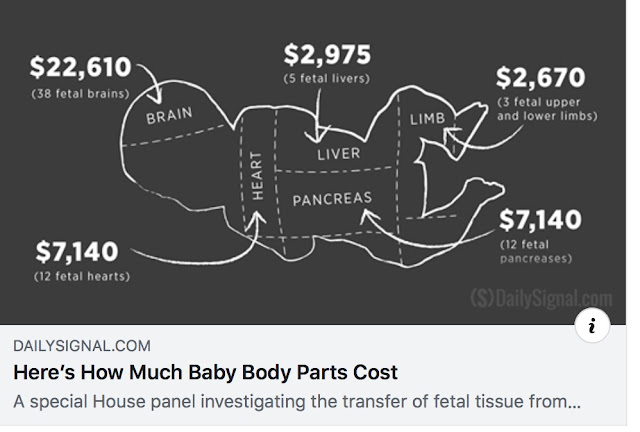 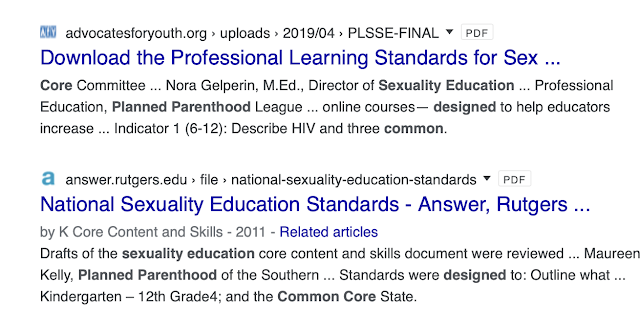 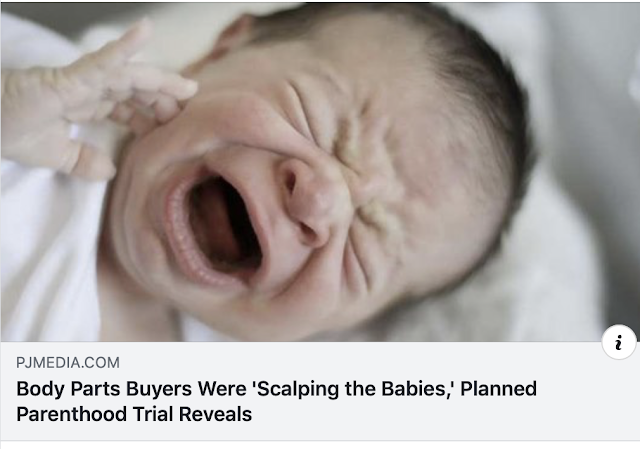 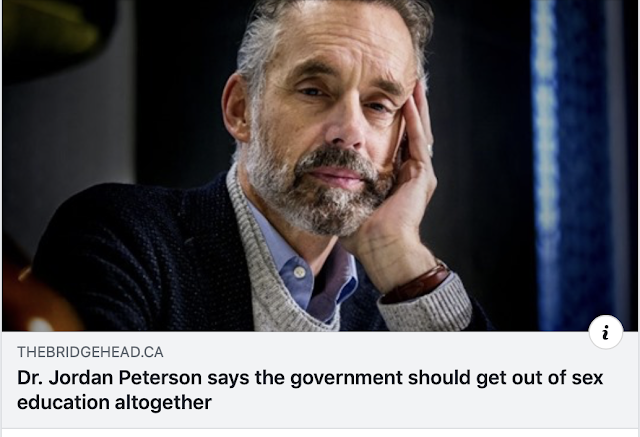 Leaders like Dr. Jordan Peterson says the government should get out of sex education altogether.

Years ago with the establishment of the United Nations, Julian Huxley, the Director-General of UNESCO stated "It (UNESCO) can stress the ultimate need for world political unity and familiarize all peoples with the implications of the transfer of full sovereignty from separate nations to a world organization.

UNESCO is the United Nations Educational, Scientific and Cultural Organization. Notice EDUCATION. Their goal is world equity with the World Core Curriculum and we are their dupes.

Dr. Jordan Peterson says the government should bet out of Sex Education altogether. Christian parents agree, but must flee public schools to do so! 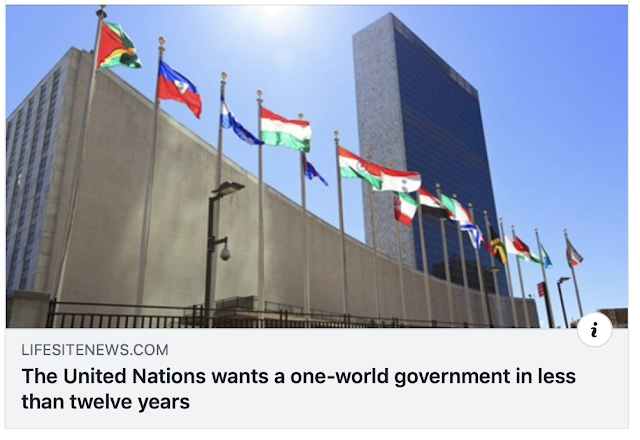 Common Core,  the public school monopoly, is based on the UN World Core Curriculum. The goal of this curriculum is to undermine patriotism and nationalism in favor of a one world government.

Should I consider the "my dear" a bit condescending?

And with this attitude toward our country and its people (his fellow Americans) he defends the public schools. Apparently it reflects my friend's belief system. It does not reflect mine. But who am I to object. Not someone who counts, it would appear. 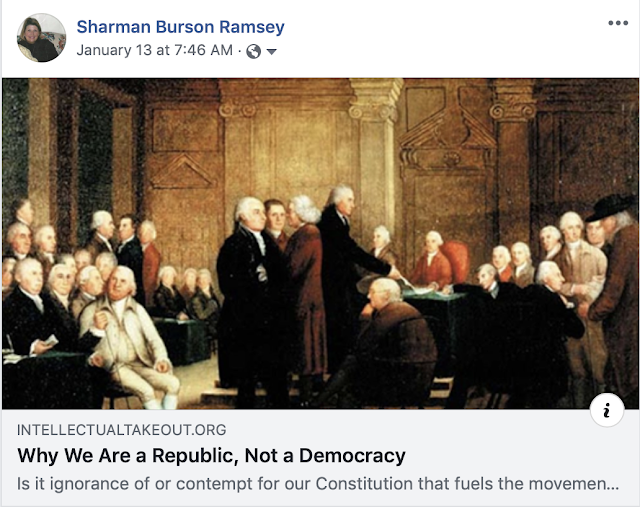 But then, my friend teaches Constitutional Law. 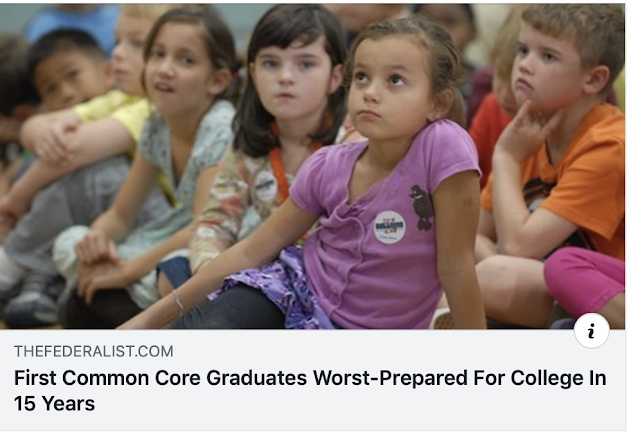 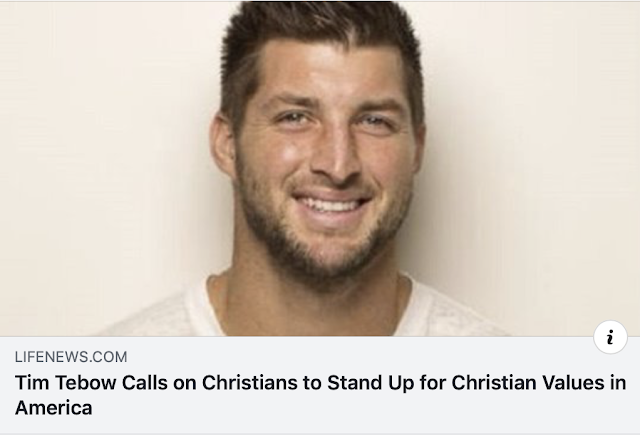 Just how many parts of the First Amendment are violated with Secular Humanism dominating our public schools?

And... considering Tim Tebow's call for Christians to Stand Up for Christian Values ... What will we do about it?


I do enjoy the give and take on Facebook. I have much respect for my friend. My friend, Mike Stone, is a brilliant, gifted man. This is from his firm's website:

Sharman Burson Ramsey is a novelist. Ramsey's first novel, Swimming with Serpents, set against the backdrop of the Creek Indian War, was published in September 2012 by Mercer University Press. The sequel, In Pursuit, set during the First Seminole War, was released in September of 2013. It was followed by On to Angola followed. Then came the cozy mysteries in the Mint Julep Trilogy.  She has a MSE from Troy University in Dothan and a BSE from the University of Alabama. With roots growing deep in the Deep South and her love of all things Southern the website Southern-style evolved.

Ramsey has taught 7th through 12th grades in public and private schools and writing classes in community outreach programs, as well as having served as an adjunct history professor at Troy and Gulf Coast. She has also co-hosted an area radio talk show on politics and education. She is a Christian mother of three and grandmother of five.