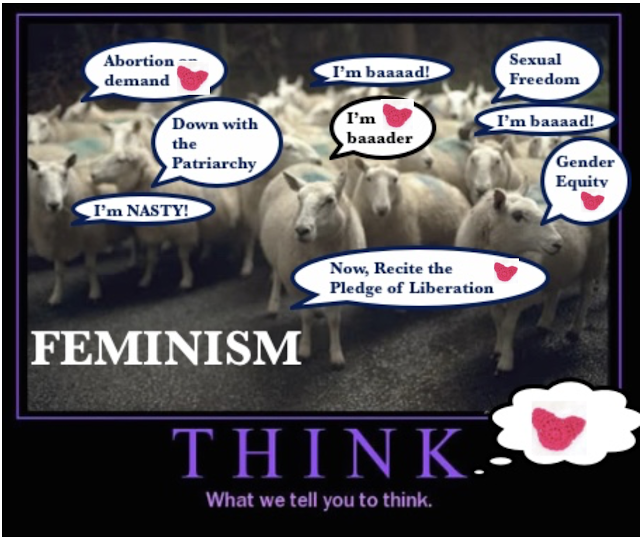 Shortly, the public will be unable to reason or think for themselves. They'll only be able to parrot the information they've been given on the previous night's news. Zbigniev Brzenzinski

Mika Brzezinski': "Our Job" to "control exactly what people think..."

Redefining Success Beyond Money and Power? From Ariana Huffington's Bed?

Did they not realize the irony of their new definition of success being announced from a bed? 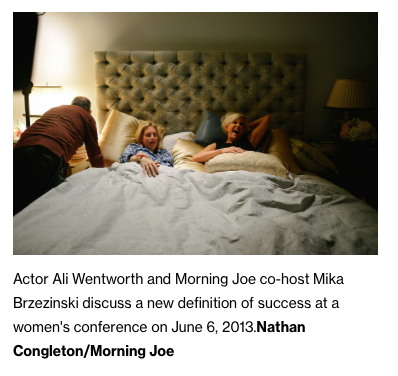 Not Sex Objects? Looks like she traded a bit on sex from THESE pictures. 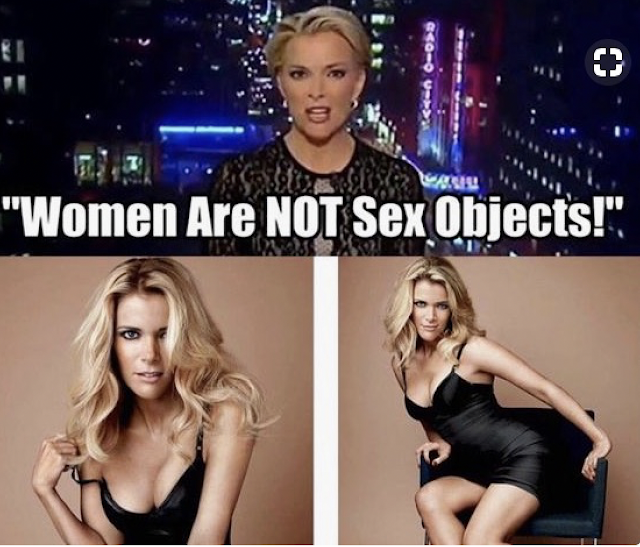 Insights from their personal and professional lives? In between panel discussions, the women jumped into Huffington's bed for an on-camera chat. 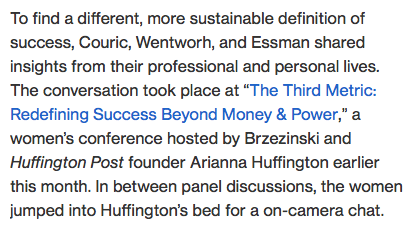 So, this "Nasty Woman" was a leader of the Woman's March and the "Me Too" movement? Yet, these women seem to send the message that a part of their strength IS their sexuality. "Nasty" woman? Crude vulgarity? What message are they sending?

You are a Feminist only if you support abortion. That is required in Feminist dogma.

Me Too, Willy! These women claim to be role models?


When did the ME TOO movement become a WITCH HUNT AND A SHAKEDOWN?

WHEN DID THE ASSUMPTION THAT ALL POWERFUL WOMEN ARE FEMINISTS OCCUR?

Can you imagine Margaret Thatcher bouncing around on Ariana Huffington's bed like adolescents at a pajama party discussing a new definition of success? (All the while Mika is apparently carrying on an affair with the former Samson of the Republican party while lecturing the rest of us on morality. The hypocrisy of these people continues to amaze me! Getting promoted because of the contacts of her father, finding her "voice" by sitting next to Joe Scarborough and she is a role model for young women? She talks the talk of the feminist ideology and therefore she is an icon of their movement.)

But then, their definition of morality is different than that of most Americans. Their morality is not individual, but group. You must pay homage to the god of death with total obeisance to Abortion on Demand, to Euthanasia, to No Borders, to pure faith in Climate change (no replicable data), to sexual promiscuity, to disrespecting our military and and every other tenet of the Progressive ideology?

No God. No absolutes.  If you say the right words and write a check to to the right causes you are a moral person. Oh, yes, you might pat yourself on the pink va jay jay cap, sign of your individuality, as to what a "moral" individual you are while throwing stones at someone else's presumed immorality.

So the current god of this world is the Lord of Misrule, the ME TOO movement that goes hand and hand with the Woman's March. Listen to the words that come out of those women's mouths! And they expect respect? They are free to do whatever they want with their bodies and, when men take them up on their offer -- making the Feminist Movement actually a liberation movement for Men freeing them of any responsibility for taking these women up on their blatant offers of sex -- they cry foul!

After years of currying favor with the men in power that help them along their way to becoming powerful, successful, wealthy women, suddenly they decide they have been abused and with two words "Me Too" regain their power? What they have done is create a situation where men will fear hiring women.

They had power all along. You just say no. If a man invites you to his apartment, you say no. If you go to his apartment and he greets you in a bathrobe you turn and walk away. If he overpowers you and rapes you, you call the police and report the event. There are consequences in every event, should you press charges or accept and overcome. But, if you are a powerful, strong woman you do not let events determine your future or selfish, egotistical men rob you of your happiness.

Nor do you revel in bringing strong innocent men down.

She was someone for whom he had been willing to lay down his life. Did he put a hand on her? Proposition her? He called her "sweetheart." God forbid this woman ever face a terrorist or have to defend our country in any manner.

Could she possibly have said, "Sir, Sweetheart is a word I find demeaning and I would appreciate your not calling me that." No, she ran home to tattle to the member of Congress for whom she worked and plotted to ruin a man's life rather than stand up for herself. There is a group there in Washington out to weaken our country by emasculating our men and undermining our culture. You notice, her name is not given here. Who else saw this exchange? On her word alone a man's career is damaged.

She was a Congressional staffer. Now we know where the Swamp folks gather. Just follow her around. I wonder for whom she works.

She demeans the experiences of women who have truly endured abuse.

This man has stood up to terrorists and armed combatants all over the world but a princess who should be home preening in front of a mirror wearing her tiara brings him down.

I am ashamed of womankind at the distance down we have jumped from the pedestal of fidelity, honor and integrity, the hand that rocks the cradle that ruled the world, women once occupied to be the whiny, wallow in the filth of sexual promiscuity and then respect me in the morning excuses for a female that demand respect for being strong and capable when they display none of that!

Being a Keeper of the Home does not refer to housework. It does imply being the most secure part of the home on which all may depend and repair to for safety (the keep of the castle), the one who keeps the light shining forth to show the shoals of life and bring all within her scope home safely (the keeper of the lighthouse).

This person has the most important job of all as giver of life and keeper of the sanctity of that home. She has the hand that rocks the cradle that rules the world whether she stays home and works or works outside the home.

I look at the women above. I hear the words that issue forth from their mouths and I cringe. Where is Dignity? Where is Honor? Where is the self-sacrifice necessary to raise another generation to take their place in this world? 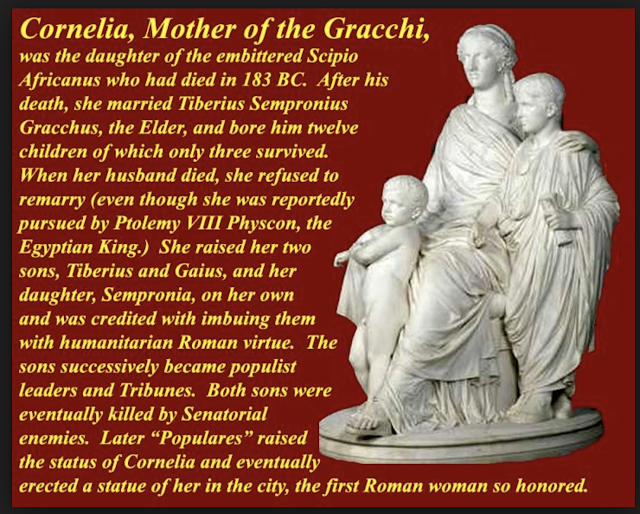 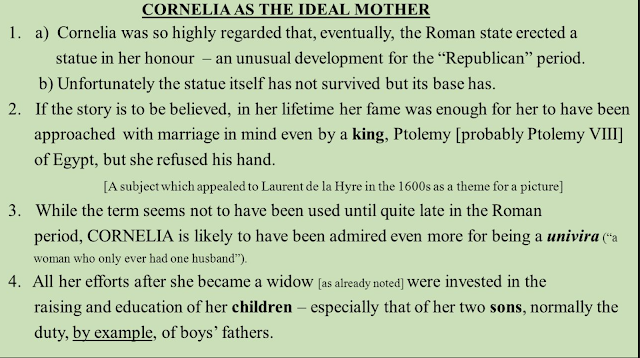 Cornelia was respected as the role model for women who sought to be all she could be. One whose children would "rise up and call her blessed." 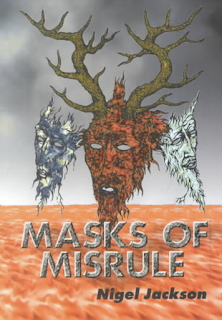 
Posted by Sharman Ramsey at 8:52 AM
Email ThisBlogThis!Share to TwitterShare to FacebookShare to Pinterest