If I Ruled the Schools...A New Years Day Reflection 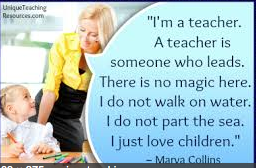 If I Ruled the Schools... A New Years Day Reflection


I guess it is because it is New Years Day that made me start thinking of what I would do if someone gave me a mandate to fix our schools.


My educational theory: The Golden Rule should rule. Do unto others as you would have them do unto you.

You avoid creating the bad social situations that all the social programs are developed to alleviate by simply giving our children THE VERY BEST ACADEMIC EDUCATION POSSIBLE in a safe environment. That is the mission of the school. If the schools can achieve that goal, then they have made their greatest contribution to society -- morally sound, capable students because they can read and have been given the greatest pieces of literature to read. These students have much less chance of becoming homeless, hopeless and helpless.

Anything else is between the child and his/her parents using their own library card and imparting their own religious education (I refer to the established religion of Secular Humanism with its New Age Techniques currently in the schools), but WILL NOT COME INTO A CLASSROOM if I ruled the schools.

The story of William Hampton Flowers would serve as inspiration to us all. You never know who might be observing and what a difference your behavior at any moment might make to the future not only of you but that of your children through many generations.

And so now you know why I will never "rule the schools." I would be too much like Jesus when he  upset the tables running the money changers out of the Tabernacle.

That is pretty much what my hairdresser told me when I ran for the Dothan, Alabama school board in the early 90s. This is a speech I gave at that time. The hand out I refer to in this speech is something I shared with you when I wrote about the Bigotry of Low Expectations. Things are so much worse now! 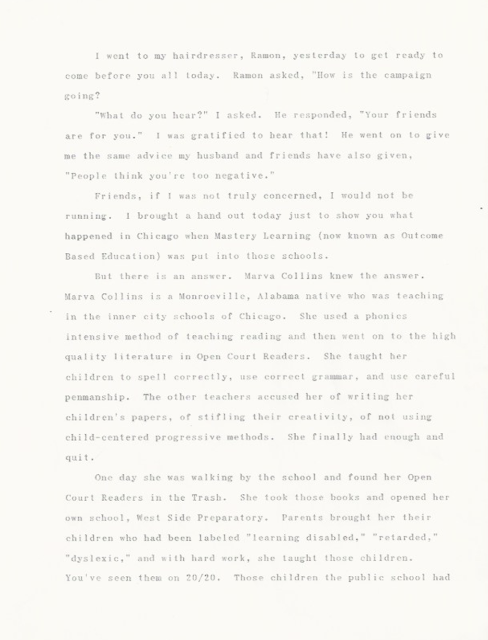 "People think you're too negative"
I say there are enough Music Men convincing the public the "think system works."
Enough sycophants telling the emperor how beautiful his new clothes! It is way past enough when only fifty percent of our children are proficient readers and about one out of three ninth graders drop out before they graduate. Enough of having a Superintendent boast that he is proud of those numbers. 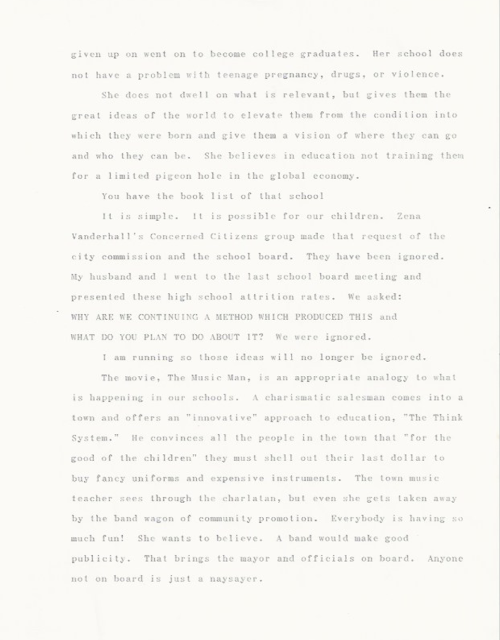 They were ignored. Yes We Can urged everyone to think happy thoughts and "be supportive" and we have been supportive-- right up to the abyss--Common Core. 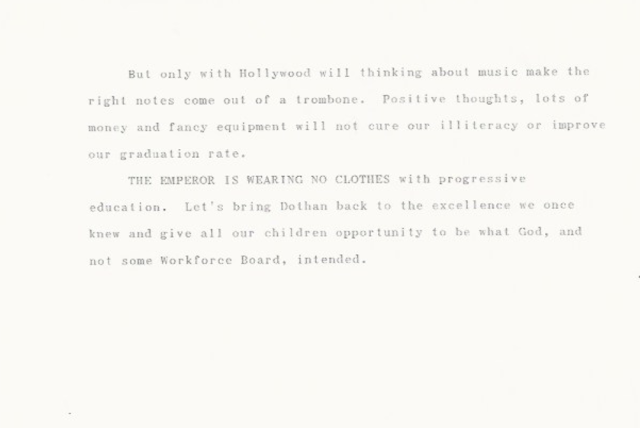 (I have written a lot lately because I found a notebook with a collection of articles, news clippings, etc. from that time. Before I threw up my hands, retreated to my garden and started doing genealogy and writing books. It is interesting to reflect on where we were then and where we have come in the past nearly 30 years. God help us!

I would have children consider the greatest of writers and write about the meaning of their words.

Hateful to me as the gates of Hades is that man who hides one thing in his heart and speaks another. Homer The Iliad

I too shall lie in the dust when I am dead, but now let me win noble renown. Homer, The Iliad

It is not unseemly for a man to die fighting in defense of his country.   Homer, The Iliad

The single best augury is to fight for one's country. Homer, The Iliad

Young men's minds are always changeable, but when an old man is concerned in a matter, he looks both before and after. Homer, The Iliad

May the gods grant you all things which your heart desires, and may they give you a husband and a home and gracious concord, for there is nothing greater and better than this -when a husband and wife keep a household in oneness of mind, a great woe to their enemies and joy to their friends, and win high renown.

The wine urges me on, the bewitching wine, which sets even a wise man to singing and to laughing gently and rouses him up to dance and brings forth words which were better unspoken. Homer, The Odyssey

There is a time for many words, and there is also a time for sleep. Homer, The Odyssey

So little time. So much to learn! My own granddaughter is a victim of this stupidity. And I am helpless to make a difference for her.

Posted by Sharman Ramsey at 8:45 AM
Email ThisBlogThis!Share to TwitterShare to FacebookShare to Pinterest