NOW CHILDREN ARE THE TARGET OF THE BROADCAST BULLIES

NOW CHILDREN ARE THE TARGET OF THE BROADCAST BULLIES 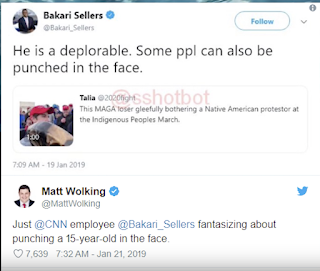 I am appalled by the continuing Broadcast Bullying by the major media. SHAME! Claiming the young man, a high school student at an age particularly vulnerable to the bullying, was "smirking" according to a reporter, who set the tone for her judgmental report on the confrontation. Pursued by the elderly Native American beating a drum in front of him, the young man smiled at him. But the Broadcast bullies choose to accuse these young people of rude and disrespectful behavior in the face of a confrontation these children, waiting for a bus at the Lincoln memorial, had never had to face before.
The young man has gotten death threats. We in Panama City ought to be even more appalled after seeing the effects of bullying on the middle schooler at Surfside Middle School. These broadcast bullies are adults!
But, children, unless they are alien children, are fair game to these folks.
"Crackers with Make America Great Again hats on," they were called.
It makes me nauseous how evil these people are. How quick they are to misinterpret every act and facial expression to support their own agenda. Disgusting!

https://www.youtube.com/watch?v=2eboCQA_y4c
Posted by Sharman at 7:15 AM No comments: