Common Core: The Emperor is Wearing No Clothes

The people were told how brilliant the designers were, how precious the materials that were to be assembled, how fortunate the Emperor was to have those designers focusing their talents on their product. They had produced so well, so successfully and all were amazed with their talent. And so they went to work and soon all would see to their awe and amazement the product of their efforts.

And so the Emperor led the parade and the murmurs followed him, “How amazing,” “How brilliant,” “How simple, yet elegant,” because no one wished to be considered unsophisticated. Until the child’s voice piped up above all the murmurs, “The Emperor is Wearing No Clothes!”

Our children cry out for us to listen. It is time to quit repeating foolish approval of what is so obviously flawed. It doesn’t matter how much it cost us! How erudite the designers! Our children have only one chance at an education. It is time to pull the plug and return as fast as possible to traditional education that never stopped working in private schools unduped by the Left Wing controllers in the Department of Education and Colleges of Education across this country!

Watch out, folks. They’re changing the name again. Common Core is in such disrepute they have now changed the name to College and Careers or some such. Florida has renamed it “Next Generation Sunshine State Standards.” That is the usual ploy when the public gets cued in on what is going wrong in our schools. 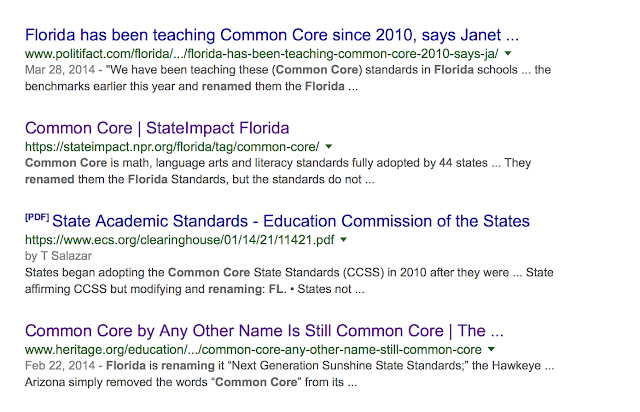 “People claiming the Sunshine Standards in Florida are a rebranding of Common Core aren’t far from the truth. Florida is leasing the majority of questions from Utah, which is a well-known rubber stamper of Common Core standards,” Punwasi says. “In Florida, they’re supposed to be a little more relaxed now that it’s no longer called Common Core even though it’s a carbon copy.”

Common Core-aligned assessments, PARCC and Smarter Balanced are also under threat in a number of states, with the majority of states not using the tests during this current testing cycle.

Alabama College and Career Ready Standards are the Common Core standards. Since adopting Common Core Alabama fell from 26 and rising to 51st with no place else to fall.

The Common Core State Standards Initiative, as it is officially known, began in earnest in early 2009. The National Governors Association and the Council of Chief State School Officers drafted the standards, but the effort quickly became a Washington-centric one. 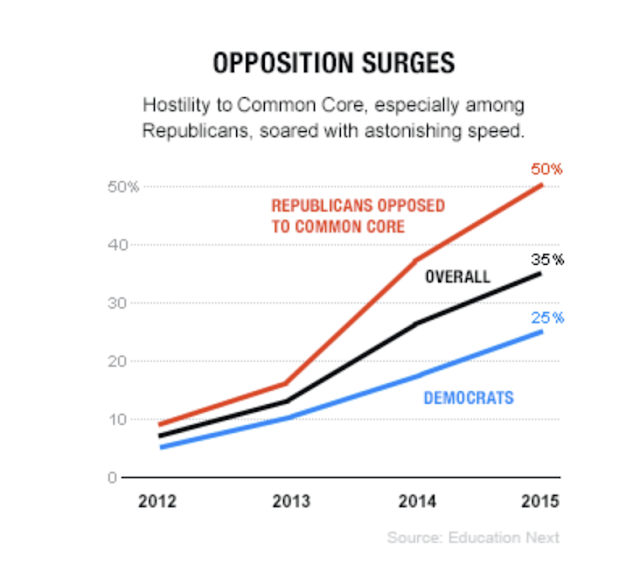 But parents across the nations are seeing through the claims and are demanding that Common Core be ousted from our schools!

One Fourth Grade Teacher writes:
As a 4th grade teacher, I have tried teaching these new tools and models. It has added the number of steps and teaches the children to just be close. The ones who struggled with math struggle more now that there are extra tools to figure out and we mislead them by playing these little games of changing numbers and trying to figure out that 34 - 8 is actually 35 - 10 - 1 + 2. There are numerous more places for mistakes and the grades are actually dropping. The kids who do understand the new models actually make comments like, "of course you came up with a different answer, you solved it a different way than I did." They don't realize how the numbers relate to each other and that 24 time 17 is always the same, no matter which tool you use to solve it. If we just teach them what the numbers actually represent and require them to learn basic addition and subtraction so they can actually do the arithmetic portion of the problem, they will have a much better chance to succeed. Our students get dumber and dumber as we keep complicating basic subjects in an effort to find a magic bullet to replace actual learning.

Tea Party groups soon made Common Core a national rallying cry. In 2013, Glenn Beck took up the cause, declaring it “Communism—we are dealing with evil.” That April the Republican National Committee passed a resolution condemning Common Core as an “inappropriate overreach to standardize and control the education of our children so they will conform to a preconceived ‘normal.’ ”

Phyllis Schlafly called Common Core an Obama scheme—in collaboration with book publishers and Gates—to “dumb down” schoolchildren, “indoctrinate them to accept the left-wing view of America,” engage in “active promotion of gay marriage,” and “dismantle moral society.” Bloggers warn that Common Core would allow the federal government to engage in wholesale data collection on schoolchildren—including iris scans—then sell the information “to the highest bidders.”

This is a story about the role Big Business has played in the war over Common Core: how a handful of executives helped turn a decades-old ambition for education reform into reality, their fumbling bewilderment at finding themselves assailed by opposition they didn’t expect or understand, and how they’ve regrouped and rallied to defend what they wrought. It’s a high-stakes conflict that has generated breathtaking political flip-flops and upended traditional alliances, turning natural bedfellows into bitter enemies. It has seen some of the nation’s foremost capitalists accused of promoting an “immoral,” “freedom-robbing,” “socialist agenda,” aimed at turning America’s children into “mindless drones for the corporate salt mines.” (http://fortune.com/common-core-stan...)

In other words, folks, there are many of us out there who are crying out with voices laced with emotion:

The Emperor is Wearing No Clothes!

Posted by Sharman Ramsey at 9:26 AM
Email ThisBlogThis!Share to TwitterShare to FacebookShare to Pinterest