Secular Humanism is now the accepted religion of our public schools. 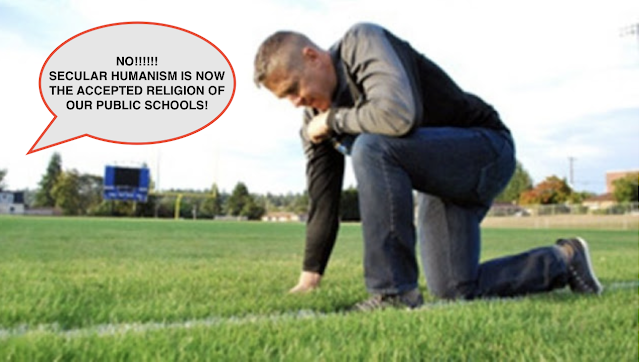 Secular Humanism is now the accepted religion of our public schools.

The establishment of a state religion exists now and violates our Constitution. Secular humanism is now the accepted religion of our public schools (1961 case of Torcaso v. Watkins). When people of faith abandon the field legion fills the void.
A high school coach is fired because he takes a knee in prayer to thank God that no one was injured in the football game he just coached. Someone in that crowd is offended and sues. The coach loses his job. A moral role model is fired by a batch of moral midgets. And that is legal, praised in some quarters.
School boards across the country are intimidated. If you do not adhere to the party line you are labeled racist, an epithet that needs no validity, and that is sufficient. Because who dares defend someone against that accusation without being labeled by association even if it is untrue and slanderous? Who dares stand for right? You think those you have elected to your school board just because they attend church with you will have the moral courage to stand up against this?
Your child's teacher says, "I am not going to just teach your child facts, I am going to teach him to think!"
Really? Sounds great doesn't it?
We want them to think, don't we? That is the top of BLOOMS TAXONOMY, highly touted in colleges of education, the source of the national secular humanist philosophy percolating wildly in our schools. The highest level of that taxonomy is "challenging the fixed beliefs of their parents." Apparently, that is exactly what God fearing parents want for their children.
That's why they vote to tax themselves more and more to put these experimental programs into the schools and enable administrators to use their children as guinea pigs. That is why they sit quietly on the roofs of their houses while the water rises and their children drown in illiteracy and false teachings.
Don't think private schools are immune. They all want to shine among their peers with their progressive techniques.
We pay to send middle school teachers to conferences where they learn NOT how to be better teachers of literature, science or math, but how to help their middle school children know if they are gay, lesbian or transgendered. They have reached that higher level of thinking. So now they "all do what is right in their own eyes." (Judges 17:6)
What really happens here?
Values clarification teaches that behavior should be the result of free, uninfluenced, autonomous choice, based on personal analysis of a given situation coupled with the moment's emotions and desires. The fundamentals of modern classroom values clarification techniques are based on the ideologies of Vermont born John Dewey (1859-1952), the philosopher and author credited to have written The Humanist Manifesto I, creed of the secular humanists. Dewey was convinced that education should be experienced-based rather than academic-based, and he advocated an approach in which "the child himself should pick and choose what he wanted to study." He was convinced that education "must guide the child, so that through his participation in different types of experience, his creativity and autonomy will be cultivated rather than stifled."
http://theroadtoemmaus.org/RdLb/21PbAr/Ed/VlsClrfVsConsc.htm
Abraham Maslow and William Coulson repudiated VALUES CLARIFICATION, the method they created along with Carl Rogers because they realized realized that they had created a monster, and campaigned to stop the use of non-directive education. It was too late. The genie was out of the bottle with DARE, sex education, Conflict Resolution, and all the other forms of psychotherapeutic subject matter to be handled by teachers acting as untrained therapists. History became Social Studies, Multiculturalism supplanted time tested and revered texts and the Pandora's box toward undermining respect for our country and its founding fathers forged ahead. Deliberately. Why, every religion, every nation, every form of government (socialism, communism, capitalism, fascism) is equal, isn't it? And if you don't believe that then you are racist! Challenge that and violent acts will be perpetrated against you and free speech is denied you. You just might offend someone and the snowflakes must be protected against such incendiary words!
Recently I spoke with a new senator to the Florida legislature. I told him I wanted to talk with him about education. He said he had made a new friend who had been involved in education for 30 years whom he trusts to guide him. I cringed. This representative has rearranged the deck chairs on the Titanic for 30 years and we want to listen to him about fixing education? His answer will be more money and less testing. Something for the teachers and for the parents.
But where are our children and grandchildren in this?
I suggest it is time to say a prayer and call for the lifeboats. And it is past time for us to look at the result of Secular Humanism controlling curriculum.

Posted by Sharman Ramsey at 8:55 AM
Email ThisBlogThis!Share to TwitterShare to FacebookShare to Pinterest