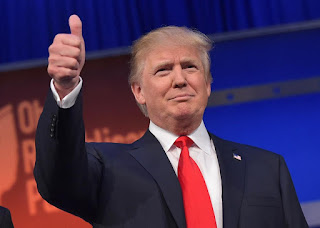 Bill Bennett, David Brooks, Mona Charen, Charles C.W. Cooke, Michael Gerson, Jonah Goldberg, Victor Davis Hanson, Charles Krauthammer, Matt Lewis, Rich Lowry, Michael Medved, Paul Mirengoff, Dana Perino, John Podhoretz, Karl Rove, Jennifer Rubin, Kevin Williamson, editorial page writers for the Wall Street Journal and others of the Republican elite including Bill Kristol, must have had a cocktail party and decided that they are the cool kids, a gang apart, and Donald Trump and his supporters are not to be their friends. Trump is okay to donate money (like the kid who can do their homework), but heaven help him should he actually presume to dance at their party!

On my former favorite morning show, Mika Brzezinski, a Democrat, high on interviewing those women "who count" who had gathered  for a self-worth hootenanny on Arianna Huffington's bed, postures as a policy maker and judge of public morality. As a Democrat her opposition is a given, but Joe Scarborough must also have imbibed the Washington Kool-Aid.  Scarborough has chosen to preside over the Morning Joe name calling of Trump supporters. (Sinister. Stupid. Idiots. Uneducated. Racist. Imbeciles.)

Like bullies on the playground these self-anointed guardians of those permitted admittance onto our national political playground have resorted to belittling Donald Trump and his friends. No Southern mother would approve of her child treating another child with such disrespect. The media does to other Americans who believe differently than their politically correct ideology exactly what they accuse Trump of doing. Our children hear this denigrating language on major media every day. So much for objectivity.

As Pat Buchanan puts it "the establishment has become unhinged" (http://buchanan.org/blog/an-establishment-unhinged-124406). He writes, "Today the press decides what words are permissible and what thoughts are acceptable. The press conducts the inquisitions where heretics are blacklisted and excommunicated from the company of decent men, while others are forgiven if they recant their heresies."

These pretentious bullies are so full of their own self-worth in the rarified air of America's own District 1 of Panem that they have lost touch with reality. Real danger confronts us and their policies got us here.

Hunger games occur throughout our country with homeless veterans and other victims of NAFTA, GATT, WTO and other trade deals that have left America hollowed out of those manufacturing jobs that once would have employed these people. Wall Street vultures feed fat picking on the carcasses of those whose life savings were bound up in those homes that often now sit empty. Our infrastructure crumbles while our leaders prance upon the international stage either currying favor by writing checks or flexing their muscle with their hawkish rhetoric backed up by the bombs and blood of our brave American military. Immigrants flood across our borders refusing to abide by the rules, be truly vetted, and wait their turn in line for the privilege of being an American.

One man on the Republican side acknowledges the need to rebuild America. One man realizes that we must set the alarm on a home secure before we sally forth to save the world. Otherwise the big bad wolf will surely come and blow our house down. While he may not be equipped to lay the bricks, he knows exactly who to call to produce the craftsmanship needed to build it strong and how to make the best deal to enable us to afford it. And then he will appoint the most able commanders to direct our overseas efforts.

So while the privileged cool kids who have benefitted from the politics of the past don't want Trump sitting at their table, the rest of the lunchroom welcomes him.

Posted by Sharman at 8:39 AM No comments:

With the San Bernardino terrorist attack the politicians and media pundits are all out to outdo the other with their wisdom and insight. So forgive me if I want to shake the radio and punch the TV with their arrogance and presumption of being the moral arbiters of our society. My heart pounds as I listen to their derision of those who disagree with them calling them morally base and uneducated.

I am amazed at their condescension to all who see some common sense in Donald Trumps' admittedly politically incorrect statements. He disagrees with these smug arbiters of morality who had no compunction about supporting bombing innocent Muslim civilians, Muslim women and children, in Iraq with the mere assumption that if they were Iraqi Muslims they must be supporters of Al-Quaeda. Brave, honorable Americans were sent to fight and die in a foreign land for a cause that was based on a lie--Hussein's possession of weapons of mass destruction.

By the way, I am a college graduate with a Masters degree, an author of historical fiction who finds that much of what Donald Trump says makes sense. Perhaps part of my support for Trump comes from my disgust with the arrogance of the talking heads presuming superiority of values simply because of a journalism degree and a love affair with a camera and the sound of their own voice.

How ironic it is for Dick Cheney, with the blood of hundreds of thousands on his hands, to deride Donald Trump for espousing “un-American” values with Trump’s call for a moratorium on Muslims entering our country. Cheney was the major hawk beating the war drum to drop those bombs on Iraq and Afghanistan and send those troops into the Middle East calling their efforts a war on terror. Yet most of the terrorists who committed the 9/11 atrocities were from Saudi Arabia, not Iraq! May I be so bold as to point out that this event happened under the watch of George W. Bush. It is an event erased from the memory bank of JEB Bush as he claims that his brother "kept us safe", yet none in the media call him to task for this mammoth misstatement. JEB even has his brother's advisers now advising him!

These folks in the media and the government are culpable for the world situation with which we now must deal. It was they who supported our country's interjection into an ant bed of religious wars going back over a thousand years.

And now they want us to let those who created the problem tell us how to fix it? Trust their moral compass?

And you wonder why those who have “experience” in government are so low in the polls?

It is morally okay to drop bombs and kill folks in fighting terror, but it isn’t okay to protect Americans (including Muslim Americans) by slowing down on immigration and actually enforcing the laws already on the books in order to assimilate the vast numbers of immigrants we already have? As for profiling, Presbyterians are not committing acts of terror. It is sane policy to look for terrorists where terrorists abide.

Every day in the news we hear about the numbers of unemployed looking for work. We know that the major cause of discontent among the young who are most vulnerable to radicalization is their feeling of alienation in the country in which they live. Rather than bringing more competition for the economic benefit that draws immigrants to America, it is time to allow the economy to recover so that we can offer these immigrants the hope of a prosperous future they expect to find. And, in the meantime, give those Americans whom the policies of the past have injured time to get their feet back on the ground.

Yet, Trump is being derided as espousing "unAmerican" values calling on the baser instincts of the "great unwashed" with his call for a moratorium on Muslims entering our country. I find this ironic when one considers that the neocons who are lambasting him with all of their power were the ones who had no compunction about bombing innocent Muslim women and children in Iraq, Afghanistan, and now Syria. It is considered moderate and "all American" to advocate carpet bombing all lands held by ISIS whatever and wherever that might be to the degree that "we'll find out if sand can glow in the dark." I dare say it is not Trump's cautious defense of Americans that has stirred the cauldron of jihad but the war dance of the neocons running roughshod over countries and customs about which we STILL lack understanding.

So we fight and spill more blood, American and Muslim. What if we "win"? What leader will we install to fight our enemies over there? Our nation building record leaves much to be desired. With all the weapons and training we left in Iraq, they still do not have the will to fight. What can we do differently?

If as The Atlantic article, "What ISIS Really Wants," (http://www.theatlantic.com/magazine/archive/2015/03/what-isis-really-wants/384980/)
is right, that ISIS is intent on bringing about the apocalypse, the media and its governmental minions are certainly determined to be a participant. War drums pound once more.

What kind of a crazy world is this?
Posted by Sharman at 3:40 PM 1 comment: