The Dare Program 20 years later. More Drugs. Not Less. We warned you!

This article appeared in the National Review March 3, 1997 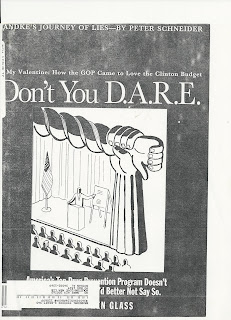 Our group of Parents concerned about the direction our education system was taking us brought it to the attention of the administration IN 1997.  NOW 20 YEARS LATER ARE DRUGS MORE OF A PROBLEM OR LESS OF A PROBLEM?

It made no difference.

You see the loyalty of these people does not belong to the parents, citizens and students any longer, their fealty lies with the
The Great Irony Here is that by degrading ACADEMICS, decreasing class time and supplanting basics of education with indoctrination of social issues, they actually PRODUCE the product that needs the "giving back" services!


I say, let's break the cycle of producing dependency by not doing our jobs as educators and ACTUALLY TEACH CHILDREN--THE ORIGINAL MISSION OF PUBLIC EDUCATION!

And so we create more generations of children unable to read well, write well, or calculate. But everyone is having fun and the schools are getting more money and the administrators feel really good about how well they are indoctrinating those children to be perfect little soldiers of Social Justice. And those of us who think the greatest charity of all would be actually equipping those children with the skills to be successful and not hanging out on the street corners because they cannot read, write or calculate are labeled Right Wing Wackos.

Do you have any idea how many more children have been turned on to DRUGS because of the DARE PROGRAM. This report came out 20 years ago. And now we have an epidemic OPIOID problem. Our community services are stretched to the limit with ADDICTION.

THANK YOU DARE! THANK YOU SCHOOL SYSTEMS and PRIVATE SCHOOLS WHO ENDORSE PROGRAMS THAT PRODUCE THE OPPOSITE OF WHAT YOU PROFESS TO BE FIXING!

And so now we are going to look at the "feel good" DARE PROGRAM.

I have attended way too many funerals of my children's friends to care about the niceties of tact. Children who would never have known where the drugs were, how much they cost or how to use them were given those tools in classrooms across America. Role playing, New Age imagery, values clarification all opened the door to the devastating influence of drugs and alcohol. 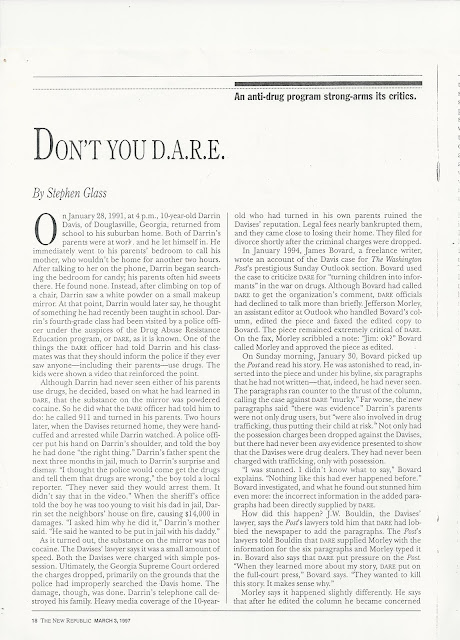 One of the things the DARE officer had told Darrin and his classmates was that they should inform the police if they ever saw anyone--including their parents --use drugs. The kids were shown a video that reinforced the point.

At the core of the DARE curriculum are seventeen weekly lessons taught in the fifth or sixth grade. The teachers are all uniformed cops trained by DARE.

But what most people don't know is that, in the past five years, study after study has shown that DARE does not seem to work. The studies have found that students who go through the program are just as likely to use drugs as those who don't. In fact, the results in one study even show the dreaded boomerang effect; DARE graduates are MORE likely tu use marijuana. Behavioral scientists have begun to question with increasing vigor, whether DARE is little more than a feel-good scheme of enormous proportions. As one researcher put it: "DARE is the world's biggest pet rock. IF it makes us feel good to spend the money on nothing, that's okay, but everyone should know DARE does nothing." None of this is a secret among drug policy experts and reporters who cover drug policy' some of the studies have been available for years.

"What you have to understand is that DARE is almost a billion dollar industry. If you found out that a food company's foods were rotten, they'd be out of business," says Mount Holyoke Sociology and criminology professor Richard Moran. "What's now been found out is that DARE is running the biggest fraud in America. That's why they've gone nuts." DARE has become so well-known for the hardball tactics it employs to shut down its critics that drug researchers and journalists have a word for those hushed--they say they've been "Dared." 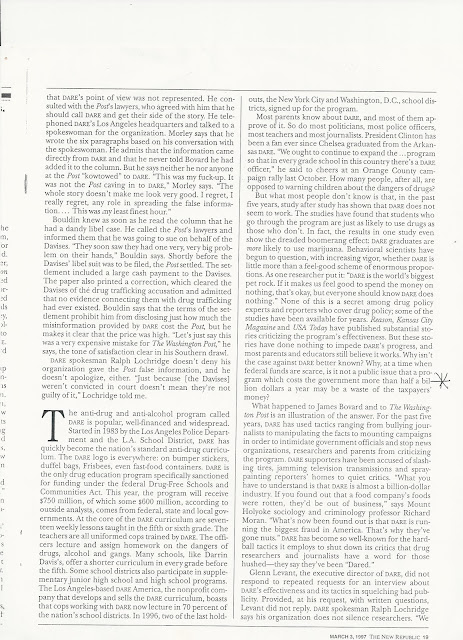 Let's just say this was a very expensive mistake for The Washington Post," he says, the tone of satisfaction clear in his Southern drawl.

DARE spokesman Ralph Lockridge doesn't deny his organization gave the Post false information, and he doesn't apologize either. "Just because [the Davises} weren't convicted in court doesn't mean they're not guilty of it," Lochridge told me. 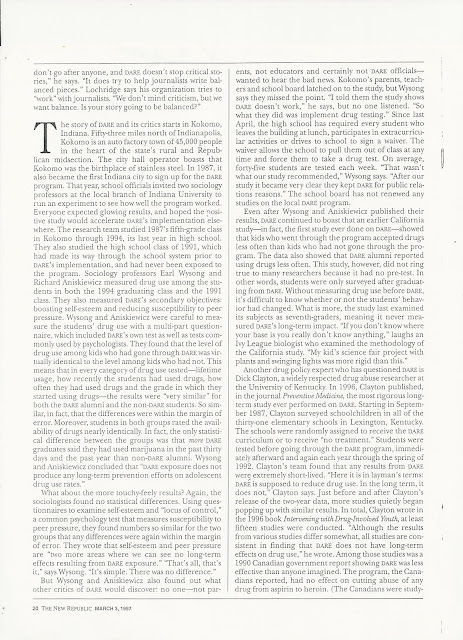 "Dare exposure does not produce any long-term prevention efforts on adolescent use rates."

What about the more touchy-feely results? Again the sociologists found no statistical differences. Using questionnaires to examine self-esteem and "locus of control," a common psychology test that measures susceptibility to peer pressure, they found numbers so similar for the two groups that any differences were again within the margin of error."

Now here, let me say, WHAT IN THE WORLD ARE THEY DOING ADMINISTERING QUESTIONAIRES TO EXAMINE SELF-ESTEEM AND LOCUS OF CONTROL IN CLASSROOMS? THESE WERE CERTIFIED PSYCHOTHERAPISTS IN THOSE CLASSROOMS OBSERVING THE EFFECTS ON INDIVIDUAL CHILDREN?

ARE THERE NO HIPPA LAWS OR FERPA LAWS THAT PROHIBIT SUCH PSYCHOLOGICAL INTRUSION INTO THE MINDS OF OUR CHILDREN?

"After our study it became very clear they kept DARE for public relations reasons." 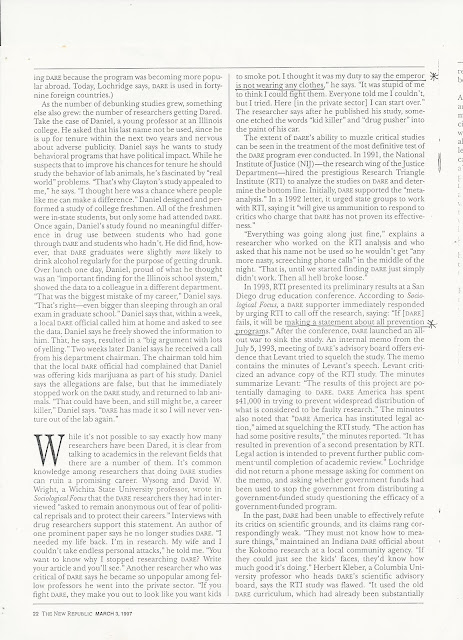 So, what happens to researchers who try to make the research public?

"Daniel says that, within a week, a local DARE official called him at homeand asked to see the data. Daniel says he freely showed the informaion to him. That, he says, resulted in a "big argument with lost of yelling." Two weeks later Daniel says he received a call from his department chairman. the chairman told him that the local DARE official had complained that Daniel was offering kids marijuana as a part of his study. Daniel says the allegations are false, but that he immediately stopped work on the DARE study, and returned to lab animals. "That could have been, and still might be, a career killer," Daniel says. "Dare has made it so I will never venture out of the lab again."

I can surely relate to that. I have been accused of being a member of the Ku Klux Klan for trying to get Phonics back in the schools. Of being a "flat-earther" and a "disgruntled ex-teacher."

Disgusted is more like it. I will own up to that.

Their major worry? "If DARE fails, it ill be making a statement about all prevention programs."

And there you have it. That would include CONFLICT RESOLUTION, SEX EDUCATION, DEATH EDUCATION, PET EDUCATION, ETC.! ALL POWERFUL LOBBIES AND DRAINS ON EDUCATION DOLLARS AND ACADEMIC TIME.

What got RTI in trouble in the most hot water is that they said other programs work better," says Moran, the Mount Holyoke sociologist. In other words, RTI found that DARE is not merely a failure in itself, but crowds out money for programs that actually keep kids off drugs. 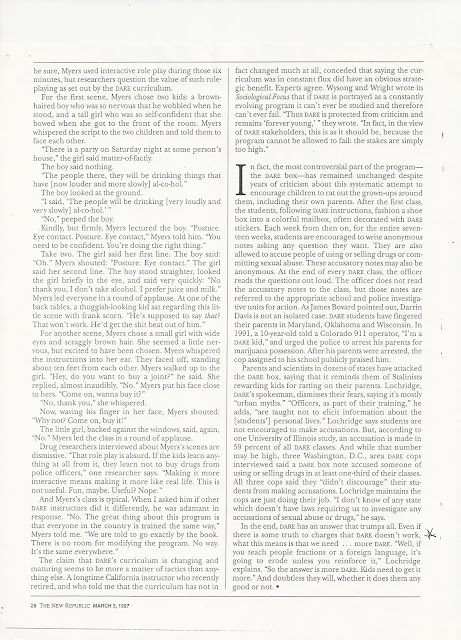 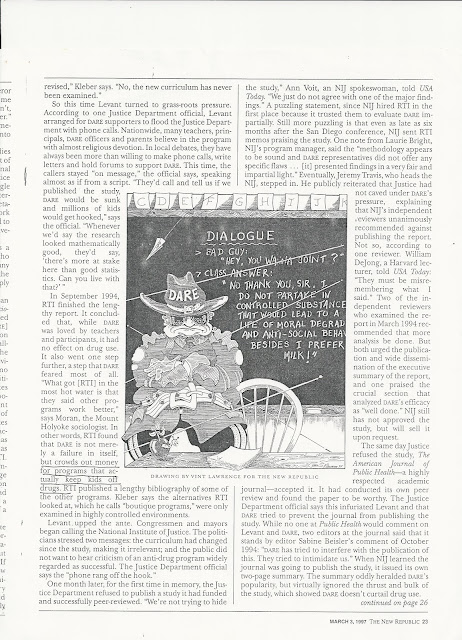 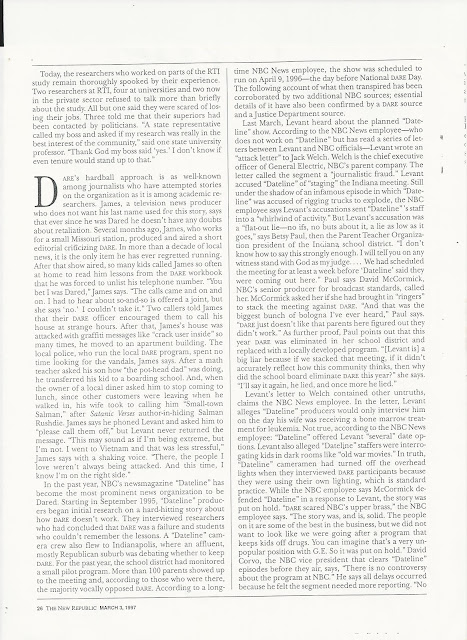 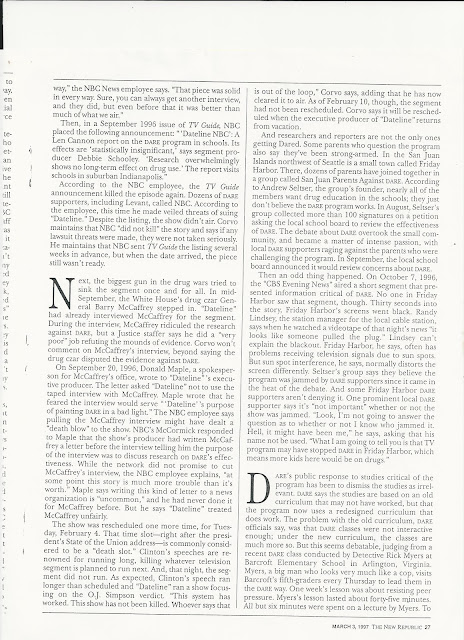 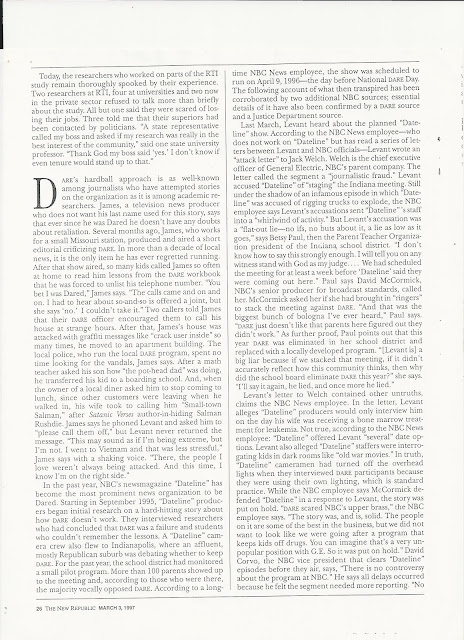 Drug researchers interviewed about Myers scenes are dismissive. "That role play is absurd. If the kids learn anything at all from it, they learn not to buy drugs from police officers," one researcher says. "Making it more interactive means making it more like real life. This is not useful. Fun, maybe. Useful? Nope.

And Myers's class is typical. When I asked him if other DARE instructors did it differently, he was adamant in response. "No. The great thing about this program is that everyone in the country is trained the same way," Myers told me. "We ae told to go exactly by the book. There is no room for modifying the program. No way. It's the same everywhere."

In fact, the most controversial part of the program-- the DARE box -- has remained unchanged despite years of criticism about this systematic attempt to encourage children to rat out the grown-ups around them, including their own parents. After the first class, the students, following DARE instructions, fashion a shoe box into a colorful mailbox, often decorated with DARE stickers. Each week from then on, for the entire sixteen weeks, students are encouraged to write anonymous notes asking any question they want. They are also allowed to accuse people of using or selling drugs of committing sexual abuse. These accusatory notes may also be anonymous. At the end of every DARE class, the officer reads the questions out loud. The officer does not read the accusatory notes to the class, but those notes are referred to the appropriate school and police investigative units for action. As James Board joined out, Darrin Davis is not an isolated case. DARE students have fingered their parents in Maryland, Oklahoma and Wisconsins. In 1991, a 10 year old told a Colorado 911 operator, "I'm a DARE kid," and urged the police to arrest his parents for marijuana possession. After his parents were arrested, the cop assigned to his school publicly praised him.

Parents and scientists in dozens of states have attached the DARE box, saying that it reminds them of Stalinists rewarding kids for ratting on their parents.

In the end, DARE has an answer that trumps all. Even if there is some truth to the charges that DARE doesn't work, what this means is that we need ... more DARE. "Well if you teach people fractions or a foreign language, it's going to erode unless you reinforce it," Lochridge explains. "So the answer is more DARE. Kids need to get it more." And doubtless they will, whether it does them any good or not.

LA School District. We've seen what a good job you have done in California with this. 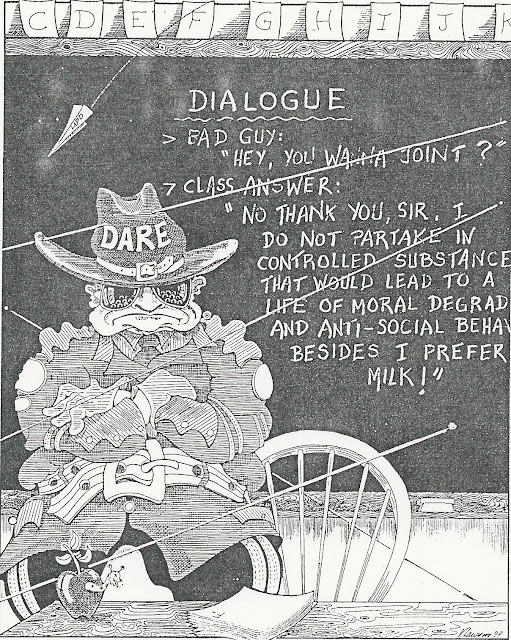 Posted by Sharman Ramsey at 9:39 AM
Email ThisBlogThis!Share to TwitterShare to FacebookShare to Pinterest