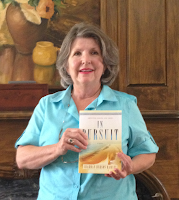 My copies from Mercer of IN PURSUIT just arrived! I want to share the Acknowledgements page with you.

Writing this novel has truly taken me on a journey I never expected.

I started out studying European history and never thought to find a focus in the Southeast United States and particularly Native American history. Then I discovered my own Native American heritage and recognized that a perspective has been neglected because the victors write the history. Indeed, Josiah Francis is my half third cousin seven times removed through our common Shawnee Cornstalk line (according to genealogist Don Greene and my Legacy genealogy program). While I also have ancestors on the other side of this story, it appears that the voices who are telling me their stories happen to be those of a forgotten people.

I want to acknowledge the assistance given to me by Dale Cox, author of History of Jackson County, Florida. He is a descendant of William Augustus Bowles and the Perrymans, Seminoles of Northwest Florida. Don Greene, author Shawnee Heritage I and II, has once again provided valuable information regarding the relationships of the major players in the novel. Robert Register, blogger at Zero, Northwest Florida, my favorite Renaissance man, who knows a lot about many things, shared interesting tidbits along the way, guiding me toward interesting facts of the era.

I also want to express my sincere appreciation to dear friends and my favorite bridge partners, Dr. Joe Budd and his wife, Cheryl, for tipping me off to the "year there was no summer." It is amazing what an impact climate can have on world events!

You will notice in this series the respect I have for Harry Toulmin. It was a serendipitous discovery to find that he is the ancestor of Rondi Bates Turner, my University of Alabama Tri Delta pledge sister, roommate, and one of my dearest friends. I knew she was extraordinary!

Joie and Godfrey needed to have their story told. But I also wanted to tell the story of the First Seminole War through three different perspectives: the Red Sticks and Blacks, the Americans, and the British. I hoped to do so and still relay Joie and Godfrey's personal drama.

This amazing era in our history has been vastly underrated in its importance to the future of the United States. The Negro Fort mentioned in the story is located just south of the Northwest Florida town of Sumatra and is now called Fort Gadsden. Andrew Jackson had his aide-de-camp Lieutenant James Gadsden build a new fort onto the remaining battery tower of the Negro Fort during the First Seminole War. Jackson then declared that it be called Fort Gadsden. Only in history is this place remembered as the Negro Fort.

My husband and I found the Negro Fort with determination since a bear had demolished the sign. We went during the same time of year that the fort was destroyed. I imagined the fort filled and bustling with the activities of the more than 300 men, women, and children within. Two hundred years ago, a lucky hot shot hit the magazine of the Negro Fort. It came from an American gunboat under the order of General Andrew Jackson that was followed through by command of General Edmund Pendleton Gaines and actually carried out by Colonel Duncan Lamont Clinch on the Apalachicola River in Spanish territory. The instant casualties included 275 men, women and children. Those people and their story are a part of our history and should not be forgotten.

It is my hope that the Negro Fort, with all the hopes and dreams it represented, can be rebuilt to respect the memory of those who sought the same dream upon which our country was founded--freedom. Call it what it was called then, a name that was their badge of courage and hope. Mow down the weeks and mark the cemetery that holds the remains of those who lost their lives that day as a reminder of the blood, sweat and tears that have been shed to bring liberty for all the citizens of our country.

I thank my publicist, Kathie Bennett, and my friends Cassandra King, Janis Owens, and Karen Spears Zacharias. Unfortunate, death claimed two of my most cherished friends, Barbara Clemons and Agatha Bennett, before we could have the book signing we had looked forward to. I miss you both.

My appreciation goes out to Marc Jolley of Mercer University Press for believing in the novel -- and in me.
Posted by Sharman Ramsey at 6:39 PM No comments:
Email ThisBlogThis!Share to TwitterShare to FacebookShare to Pinterest
Newer Posts Older Posts Home
Subscribe to: Posts (Atom)