Do not think Common Core has disappeared. They just call it something else now. Or don't even bother to disguise the truth. Please remember Dothan City School System adopted "Whole Language" as the method of "reading" thirty years ago. As you read the following documents remember "Whole" and "holistic" mean the same thing.
Roll your eyes. Delete the post. Hide it from your feed. Demonic roots? This lady has flipped out now. Some of you are rubbing your hands with joy telling yourself, this proves it! She has totally discredited herself now! Go back to your church and share the joke. Pat yourself on the back for being such an enlightened Christian, well-armed to pick and choose among the myriad of belief systems. And trusting of your education system not to go beyond their secular responsibility to empower your child with the new mantra -- critical thinking.

This is the 21st Century. How medieval!

How do you think your child feels when entering the abortion clinic? Shooting up once more addicted to drugs? Facing down a gangbanger on a city street? Unable to get a job because he/she cannot read? Medieval?

Just who is in that "safe space" with your child?

It was December, 1996. when a group of Dothan Parents submitted a request to view the Conflict Resolution Curriculum announced by the Dothan City School System. Another effort in futility. The School system, of course, considered us mere lint on their collars, easily flicked off.

But, they had to go through the process of acknowledging us and did allow us to see the curriculum. 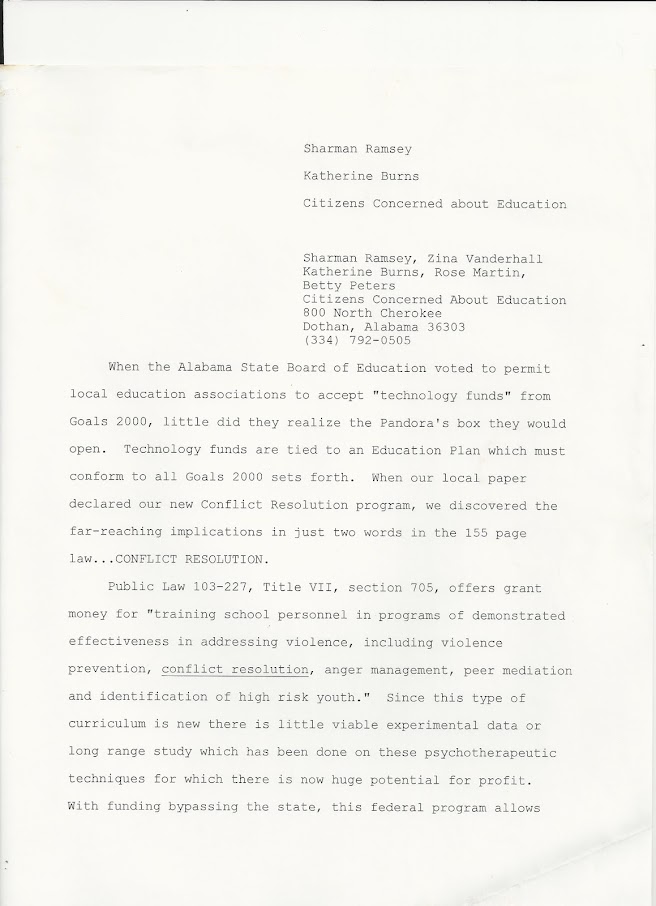 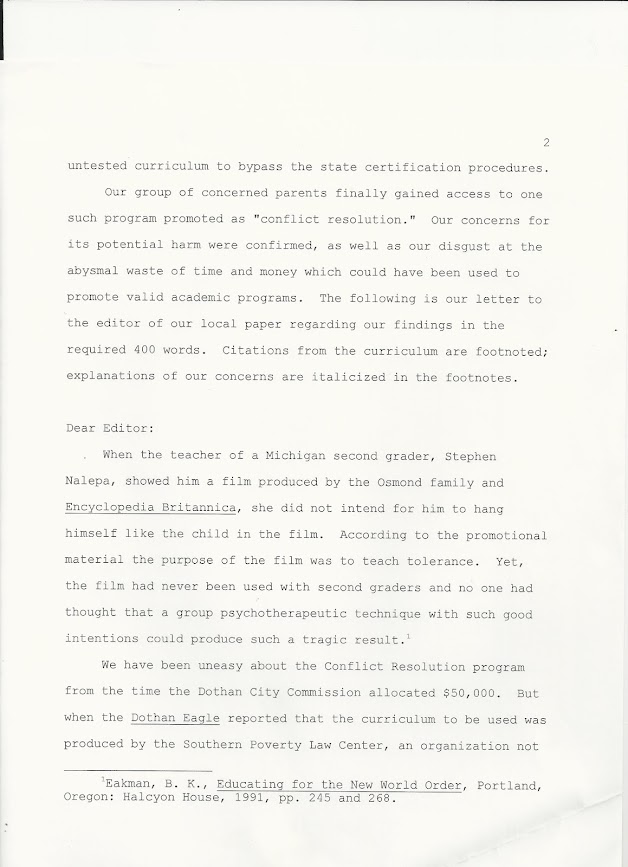 Death Education and Stephen Nalepa, Victim of the Therapeutic Classroom 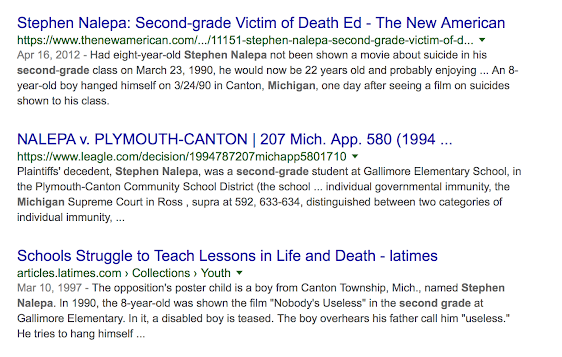 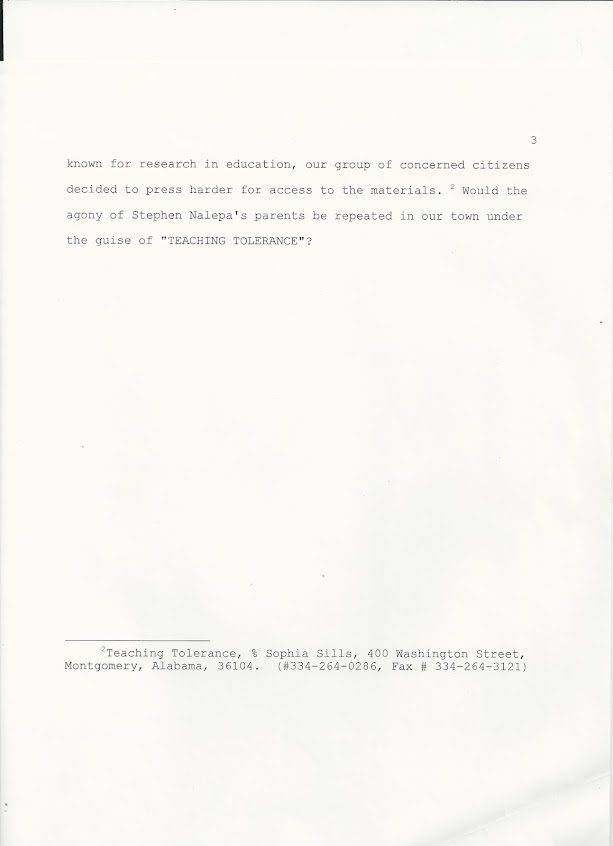 We were black parents and white parents and we did not think psychotherapeutic techniques in our classrooms were appropriate. Had our teachers been certified in psychotherapy? Did they understand that they could have impact on individual children beyond their understanding? 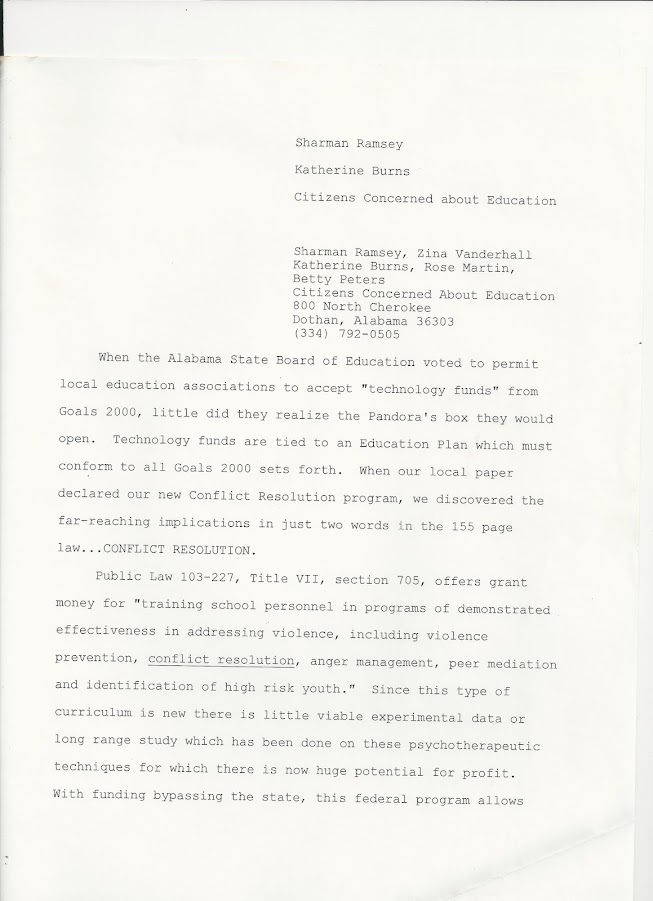 Notice, once again, we parents requested information where the program had been used and the long term studies performed to determine its effectiveness. "As this is acknowledged to be a program intended to change attitudes and behaviors, we also requested the name of professional psychologists who have approved these materials for group psychotherapeutic use.

You gave them that right? I don't remember doing that. 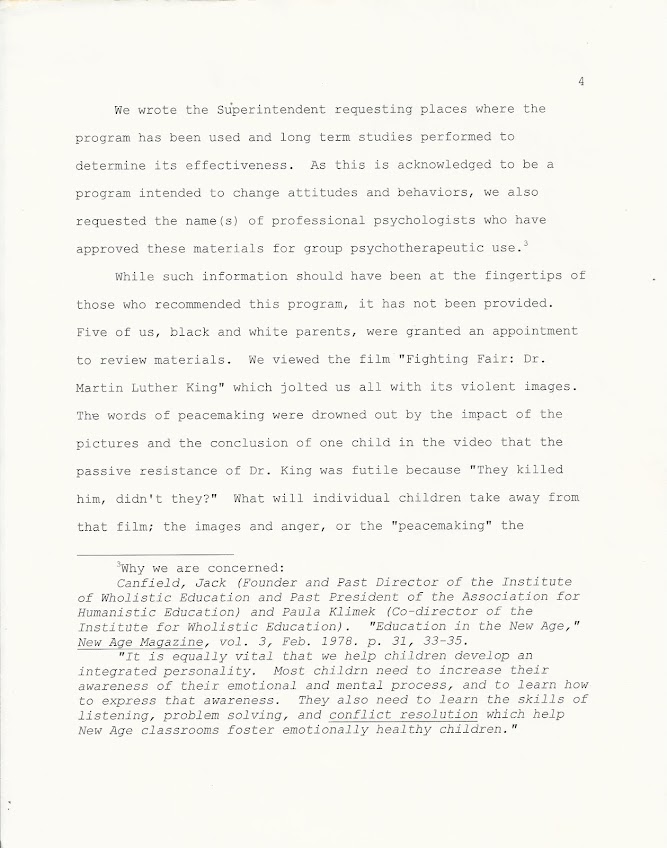 These terms have become more and more frequent in the education lexicon. According to Jack Canfield, Founder and Past Director of he Institute of Wholistic Education and Past President of the Association for Humanistic Education, A NEW AGE GURU, "It is equally vital that we help children develop an integrated personality. Most children need to increase their awareness of their emotional and mental process, and to learn how to express that awareness. They also need to learn the skills of listening, Problem solving, and conflict resolution which help New Age classrooms foster emotionally healthy children." 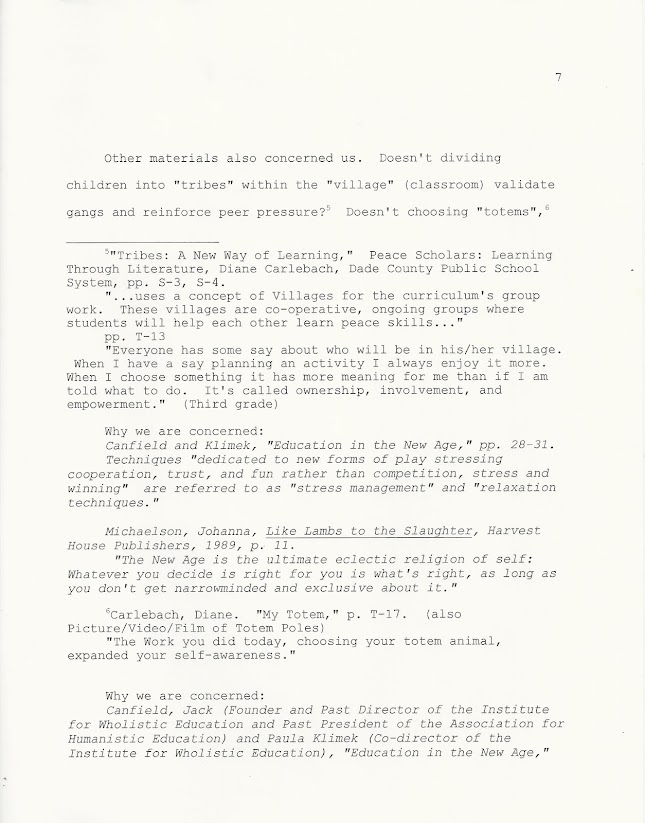 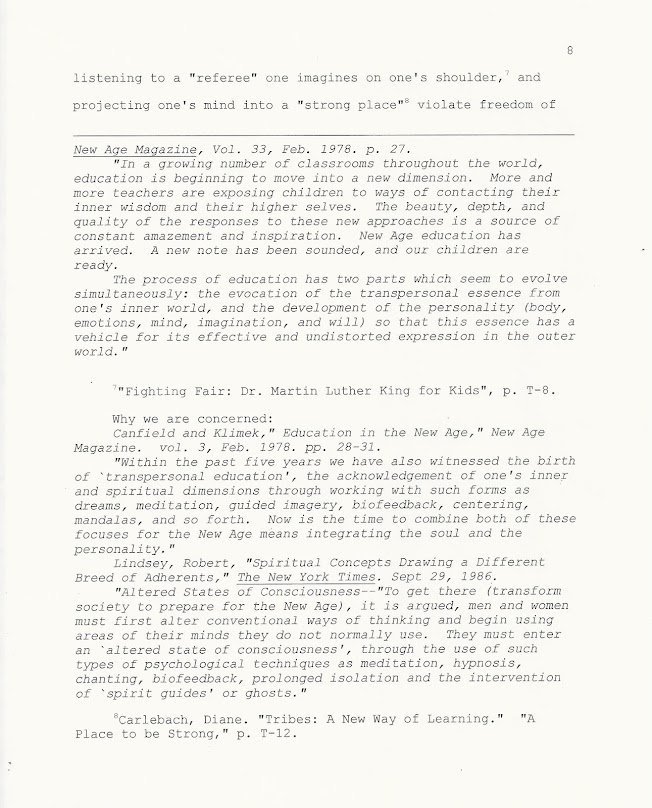 STRONG SPACE. SAFE PLACE. AND HERE WE ARE. 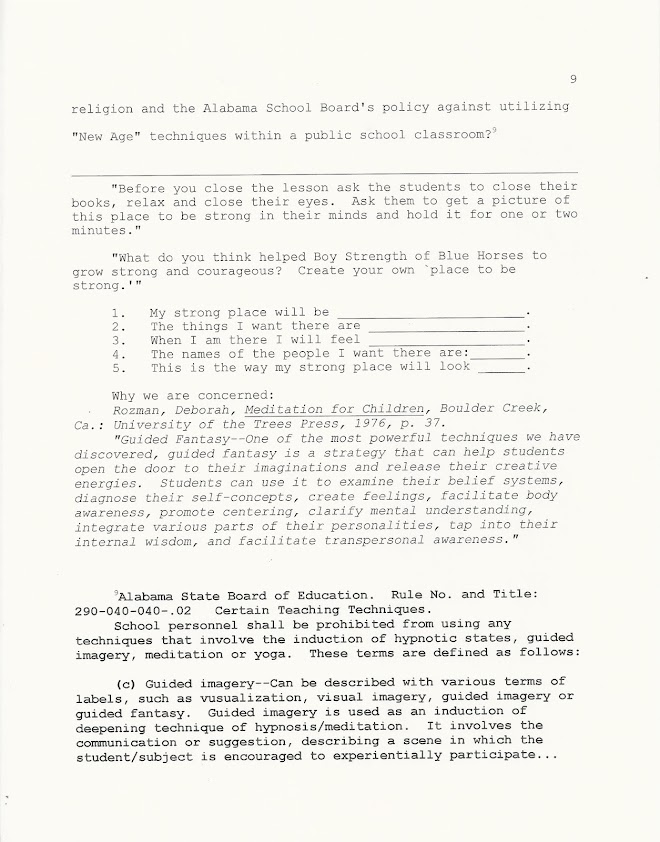 WHY WE ARE CONCERNED

OKAY. I REALIZE YOU REALLY ARE NOT CONCERNED.

YOU SAY, WHAT'S THE BIG DEAL?

...the ultimate eclectic religion of self. Whatever you decide is right for you is what's right, as long as you don't get narrow-minded and exclusive about it." 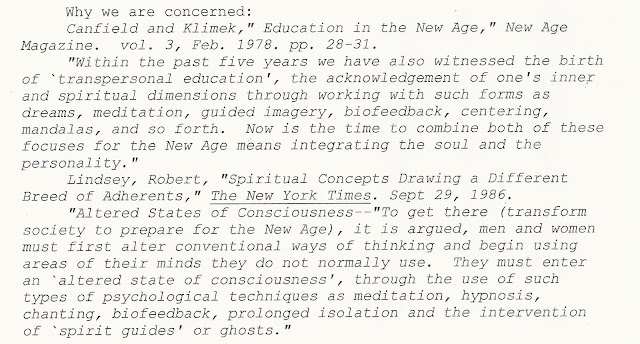 HERE ARE SOME OF THE PAGES WE VIEWED. 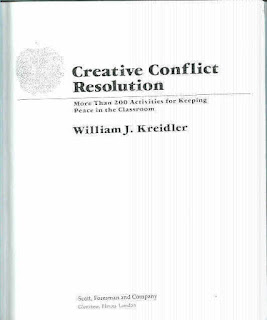 Children often question whether emotions are a legitimate topic for discussion in school. They tend to show discomfort at the mention of emotional issues. There is no doubt that affective education can be conducted inappropriately, on the other hand, it's naive to think that you can teach anything without dealing with the emotional aspect. For these somewhat conflicting reasons, I advocate a straightforward approach to emotions in the classroom.

DIVIDE STUDENTS INTO GROUPS. IDENTITY POLITICS.
Divide students into groups. Some groups are low income, some middle income, and some rich. Have the groups write down the ways they might discriminate against the greenies...
You don't think they are planting biases in the minds of these children, do you?

KEEP ON READING. BUT, I HAVE NO FAITH THAT IT WILL MAKE A DIFFERENCE WITH YOU. JUST GO SIT IN YOUR SUNDAY SCHOOL CLASS SUNDAY MORNING AND PROFESS YOUR FAITH AND BELIEF AND THEN CLOSE YOUR EYES TO WHAT IS HAPPENING TO THE SCHOOL  YOUR CHILD/GRANDCHILD. ATTENDS.

SHOULD YOU RESPOND SOMEONE MIGHT ACTUALLY ACCUSE YOU OF HAVING AN AGENDA. AND YOU KNOW WHAT THAT MIGHT DO TO YOUR SOCIAL LIFE.

But then again, you might die in your sleep tonight and have God ask you why you were missing in action.

But, if you are determined to wade through this, start at THE ROOTS.

This article is from Media Spotlight from about 1996. We tried to warn you then. Now Bill Gates has joined forces with UNESCO to establish the World Core Curriculum into all of our schools with COMMON CORE.

Meet Robert Muller the founder of the World Core Curriculum. Below are the documents signed by Bill Gates with UNESCO. 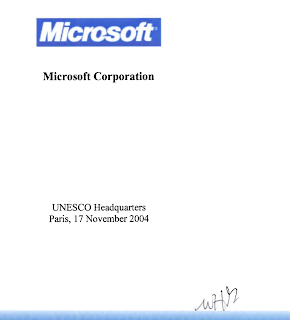 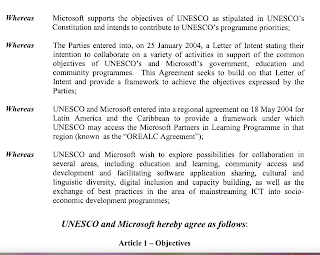 So now, Robert Muller's influence, his guides, control the curriculum that has become the national curriculum of the United States.

FROM MEDIA SPOTLIGHT: A BIBLICAL ANALYSIS OF RELIGIOUS AND SECULAR MEDIA
AMERICA 2000: EDUCATION REFORM FOR THE NEW WORLD ORDER by Albert James Dager 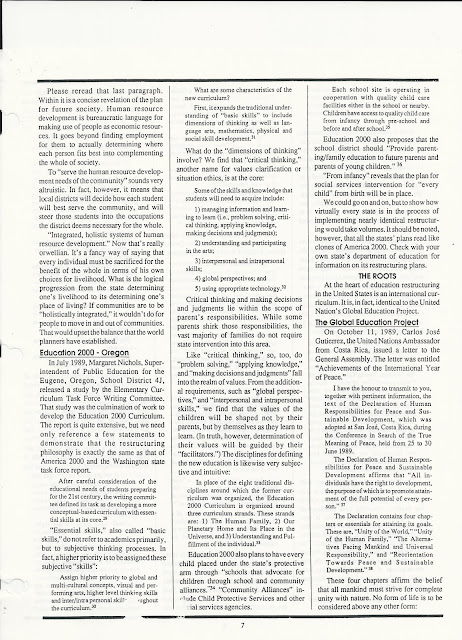 DID YOU BUY THE ARGUMENT THAT THEY WERE GOING TO BE TEACHING YOUR CHILD TO THINK RATHER THAN REGURGITATE FACTS?

SO, NOW THEY KNOW NO FACTS. THEY ARE A WALKING TIME BOMB. AN OPINION WITH NO UNDERLYING UNDERSTANDING.

Like "critical thinking," so, too, do "problem solving," "applying knowledge," and "making decisions and judgements" fall into the realm of values. From the additional requirements, such as "global perspectives, and "interpersonal and interpersonal skills," we find that the values of the children will be shaped not by their parents, but by themselves as they learn to learn. (In truth, however, determinations of their values will be guided by their "facilitators.") The disciplines for defining the new education is likewise very subjective and intuitive:

Just so you know. This is accepted dogma throughout COMMON CORE. "CURRENT WISDOM." Our teachers who sit beside us in church and are the authority in your child/grandchild's class, have been indoctrinated with this philosophy. One has only to look at the NEA Resolutions to see their moral guide. And they control credentialing. I do not say that with condemnation. I also am a teacher. I think teachers are wonderful, well-meaning, loving people for the most part. But they are also inclined to believe what they are taught in college to be "cutting edge" and "best practices" or how could they possibly be being taught such things? The highest halls of education have been infiltrated by "change agents" whose goals transcend what parents want for their children and our teachers are victim to that agenda.
The greatest trick the Devil ever pulled was convincing the world he didn’t exist.

These four chapters affirm the belief that all mankind must strive for complete unity with nature. No form of life is to be considered above any other form: by all the great prophets. The real, the great period of human fulfillment on planet Earth is only now about to begin. 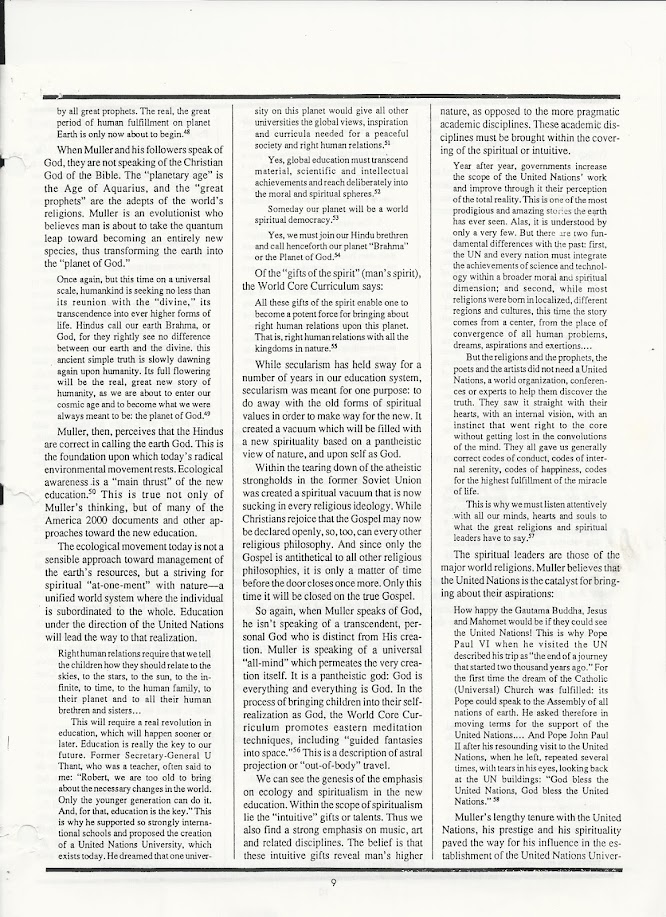 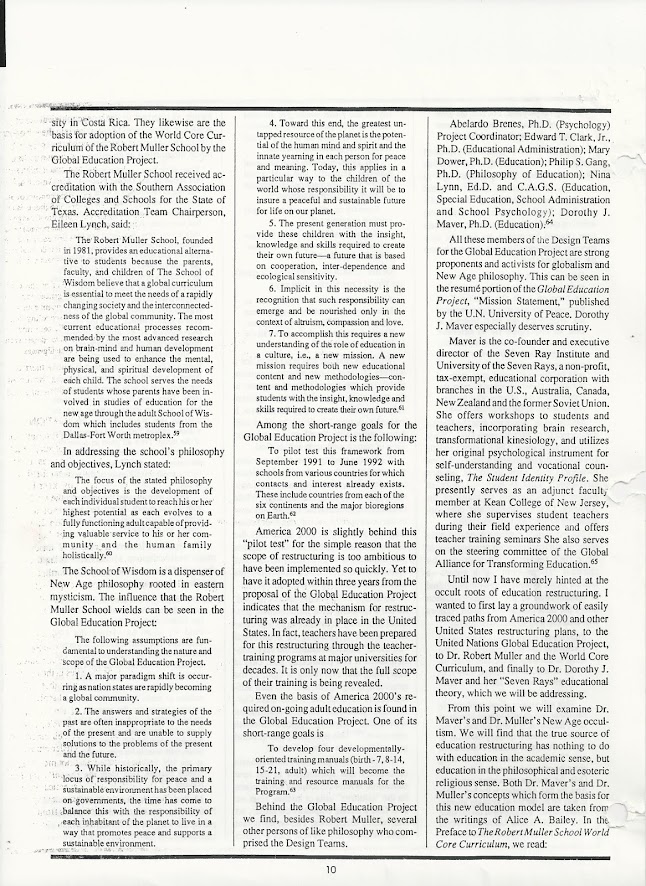 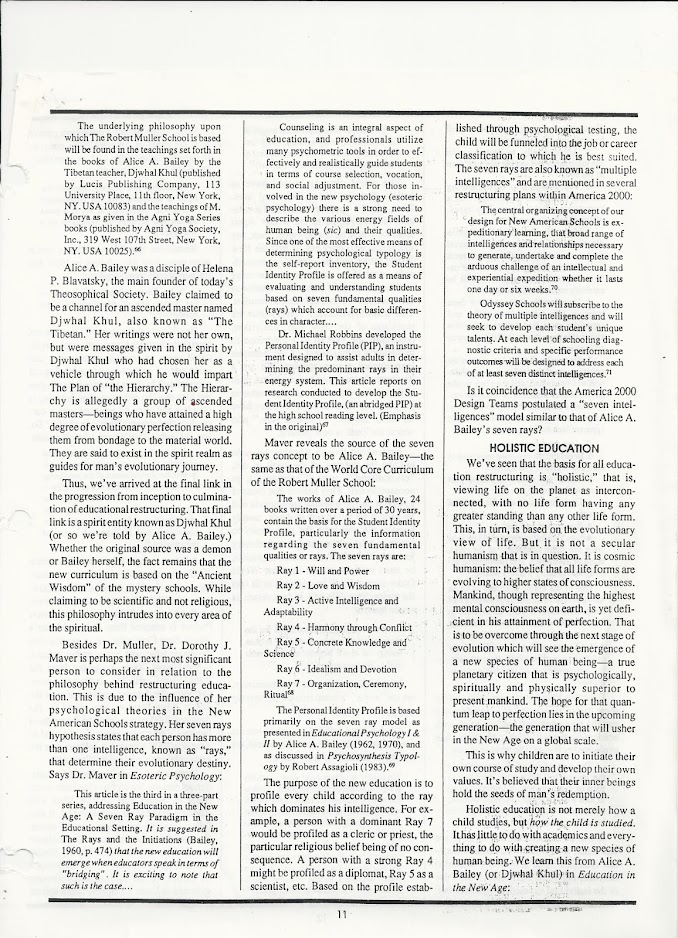 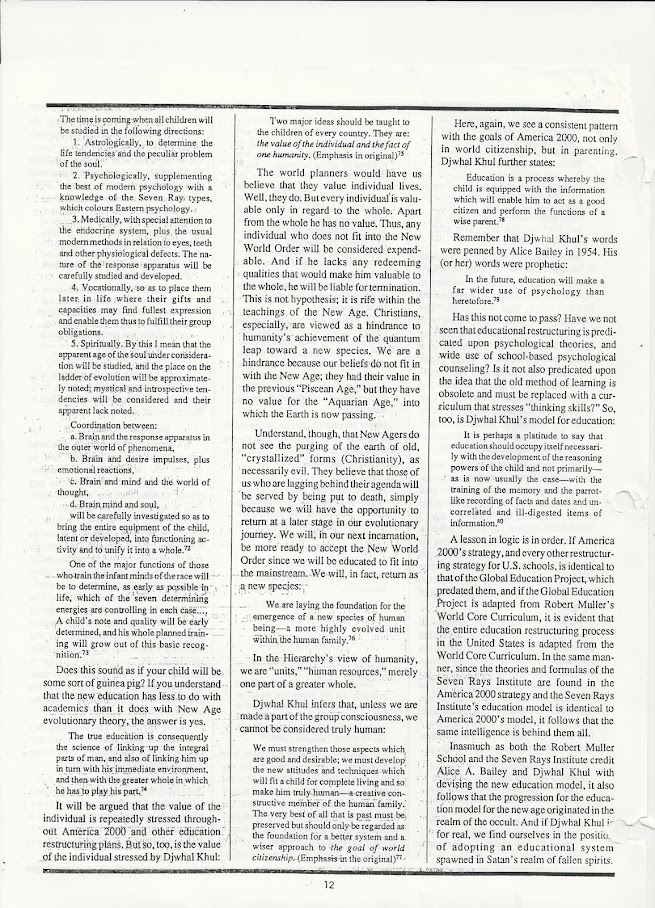 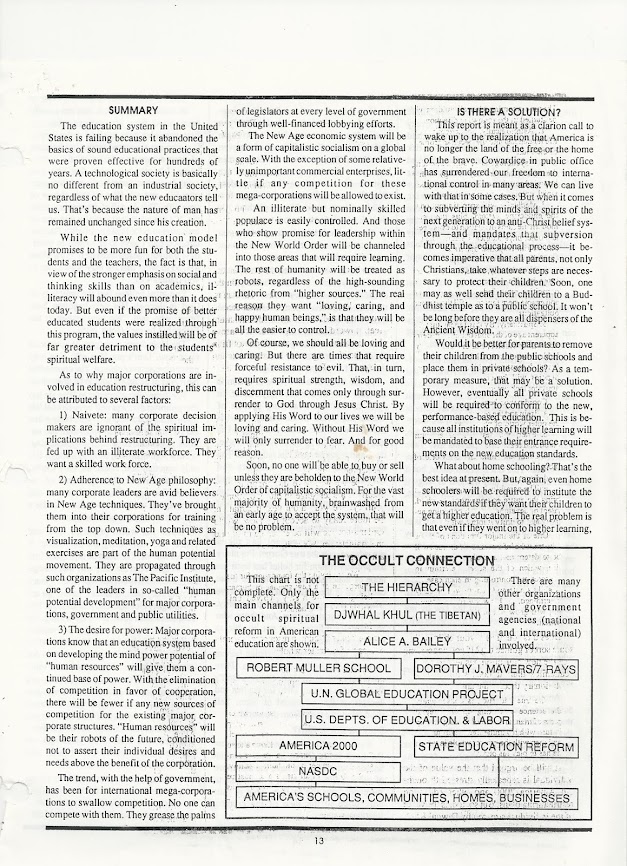 Then you really don't believe in a spiritual life, do you? You just go to Sunday school and church because it is a great social opportunity.

Because if it is real, then it calls for you to actually do something.

I've already been told "You have an agenda." I admit it. How can I protect those God wants me to do the best I can to protect.

Do you have an agenda? If not, why not?

Are you armed for this battle?

Our concerns have proven valid. Those condescending administrators now have comfortable retirements after careers made on the backs of our children. Regardless of how close you sit to the preacher in the pew on Sunday, I would recommend reevaluating what God will say to you at the Pearlie Gates?

Just look what they have loosed on our schools. Where are you in this battle? 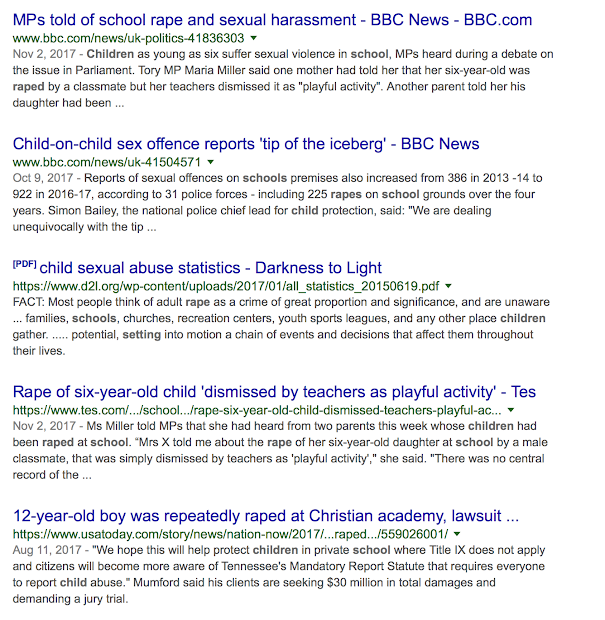 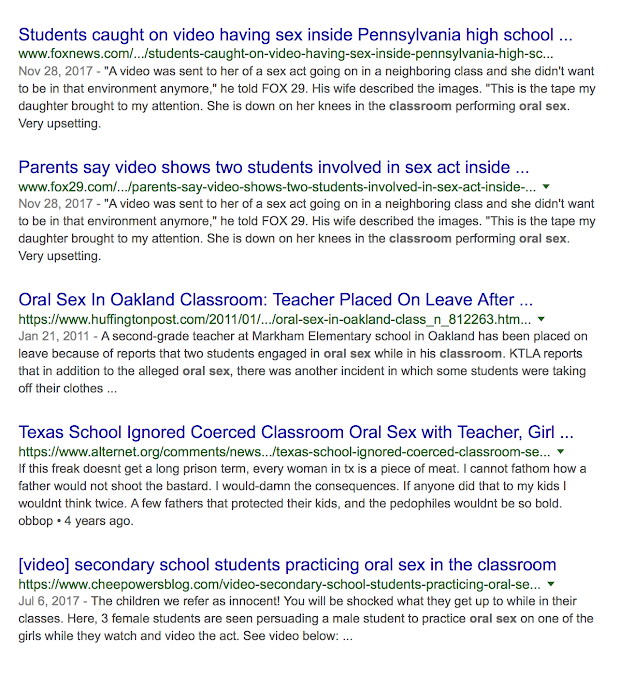 I know that's a lot. But wade through this as well. You're not finished yet.

Psalm 6:8
Depart from me, all you who do iniquity, For the LORD has heard the voice of my weeping.
Psalm 119:115
Depart from me, evildoers, That I may observe the commandments of my God.
Matthew 25:41
Then He will say to those on His left, 'Depart from Me, you who are cursed, into the eternal fire prepared for the devil and his angels.
Luke 13:25
After the master of the house gets up and shuts the door, you will stand outside knocking and saying, 'Lord, open the door for us.' But he will reply, 'I do not know where you are from.'
Luke 13:27
And he will answer, 'I tell you, I do not know where you are from. Depart from me, all you evildoers.'

A Tree and its Fruit
…22Many will say to Me on that day, ‘Lord, Lord, did we not prophesy in Your name, and in Your name drive out demons and perform many miracles?’ 23Then I will tell them plainly, ‘I never knew you; depart from Me, you workers of lawlessness.’ 24Therefore everyone who hears these words of Mine and acts on them is like a wise man who built his house on the rock.…

Posted by Sharman Ramsey at 6:17 AM
Email ThisBlogThis!Share to TwitterShare to FacebookShare to Pinterest