On to Angola: Race to Freedom

On to Angola: Race to Freedom is the third in the Creek Family Saga. Book One, Swimming with Serpents, began with my wondering what the world was like during the time of my fourth great grandmother, Vashti Vann Jernigan, Cherokee Indian. She moved with her husband, Benjamin Jernigan, "friend and neighbor of Andrew Jackson," to Southwest Alabama to settle near Burnt Corn Creek at the request of Andrew Jackson. The Creek War would have been a great influence on her life. Swimming with Serpents gives the reader the Native American perspective through the eyes of Cade Kincaid and Lyssa Rendel.

In Book Two of the Creek Saga, In Pursuit, we trace the survivors of Horseshoe Bend, a band of Creek Indians led by Peter McQueen, into Pensacola where they join forces with British officers, Edward Nicholls and George Woodbine. After the loss of the British in the War of 1812, the Indians and free Blacks and escaped slaves follow Nicholls and Woodbine to the Apalachicola River where they build a well-fortified fort at Prospect Point that came to be known as the Negro Fort. Andrew Jackson sent a gunboat up the river (Spanish territory) that sent a lucky hot shot into the battery that exploded the fort. Jackson then came down into Spanish Florida in pursuit of the Red Sticks under McQueen, a former prophet of the Creek Indian War, and the Blacks that had taken refuge at the fort.

In Book Three, On to Angola, we follow those Blacks who escaped the devastation of the Negro Fort and the former Red Stick Indians to Florida settlements near Charlotte Harbor, including Talapchopco for the Redsticks and, for the Blacks,  a place called Angola (now Sarasota). Angola is undergoing an archaeological rediscovery through the efforts of Uzi Baram and Vickie Oldham.

These exciting adventures follow characters we first meet in Swimming with Serpents, survivors of the Fort Mims Massacre. They get involved with historical figures of the times.  The history of South Alabama, Georgia and Florida come alive through the adventures of these characters. Andrew Jackson's power grows throughout this time. The people who suffered during his mighty mission of manifest destiny at last have their voices heard.

On to Angola is a powerful story of a Black family separated, and the yearning to be reunited that must overcome the challenges of distance, nature, slave hunters and fortune seekers and their own human strengths and weaknesses.

On to Angola is Florida History. It is Black History. It is Native American History. Though the story would appeal to all ages, it would probably also qualify as Young Adult because the two main characters are twins separated at the Massacre at Fort Mims that fate reunites during a tumultuous time. This book would also qualify as Christian reading because of the great influence of the Clapham reformers on the major characters.

The story of the year 1821 reveals a tale hidden behind the veils of time and the truth once more that the victor writes the history. This is the rest of that story.
Posted by Sharman at 7:35 AM No comments:

Do Libraries censor groups using their facilities according to the determination of the Southern Poverty Law Center? 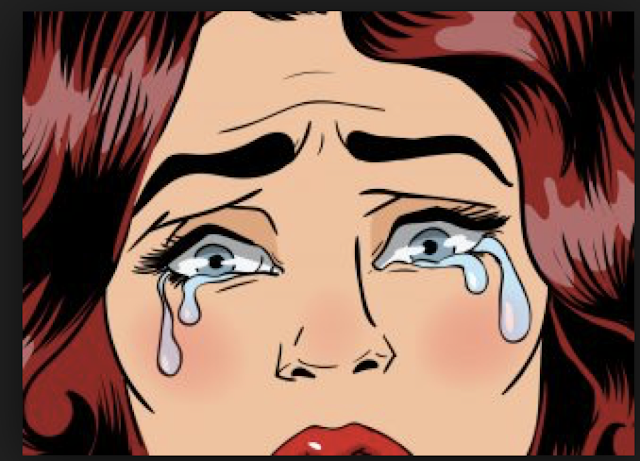 Just Curious. Do Libraries censor groups using their facilities according to the determination of the Southern Poverty Law Center?
In June 2017, the Supreme Court affirmed in a unanimous decision on Matal v. Tam that the disparagement clause of the Lanham Act violates the First Amendment's free speech clause. The issue was about government prohibiting the registration of trademarks that are "racially disparaging". Justice Samuel Alito writes:

Speech that demeans on the basis of race, ethnicity, gender, religion, age, disability, or any other similar ground is hateful; but the proudest boast of our free speech jurisprudence is that we protect the freedom to express "the thought that we hate". United States v. Schwimmer, 279 U. S. 644, 655 (1929) (Holmes, J., dissenting).[9]

A law that can be directed against speech found offensive to some portion of the public can be turned against minority and dissenting views to the detriment of all. The First Amendment does not entrust that power to the government's benevolence. Instead, our reliance must be on the substantial safeguards of free and open discussion in a democratic society.[9]

Effectively, the Supreme Court unanimously reaffirms that there is no 'hate speech' exception to the First Amendment.

Apparently the Southern Poverty Law Center has assumed the role of arbiter of what is hate, at least  according to the American Library Association.

These are Screen Shots from the American Library Association website: 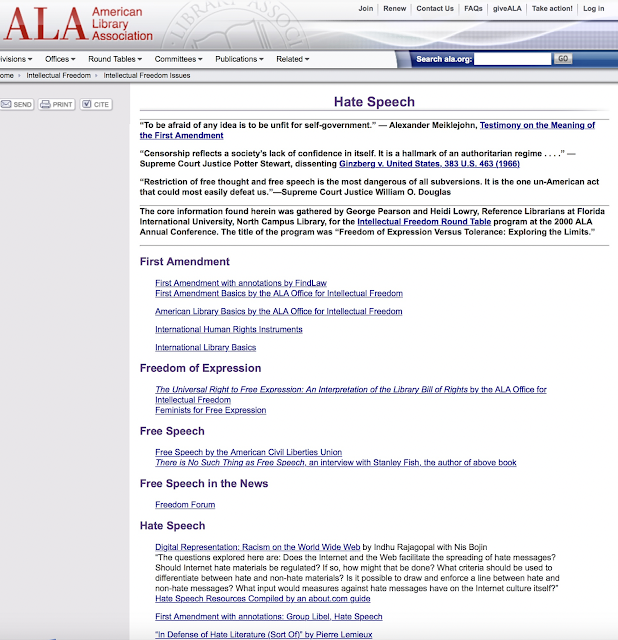 If the American Library Association truly believes what it has cited at the beginning of its Hate Speech statement, then why have they accepted dictates of the Southern Poverty Law Center as to what organizations spout "hate" speech? See below: 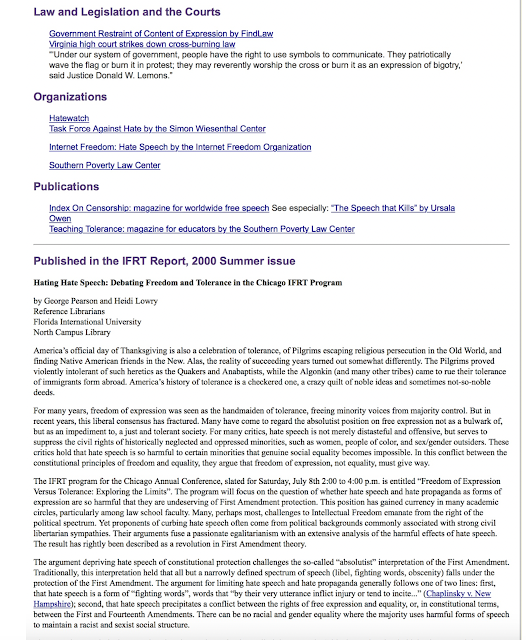 Look below at who will be discussing the legal and intellectual implications of hate speech. Who represents the rights of conservatives to freedom of speech and beliefs? 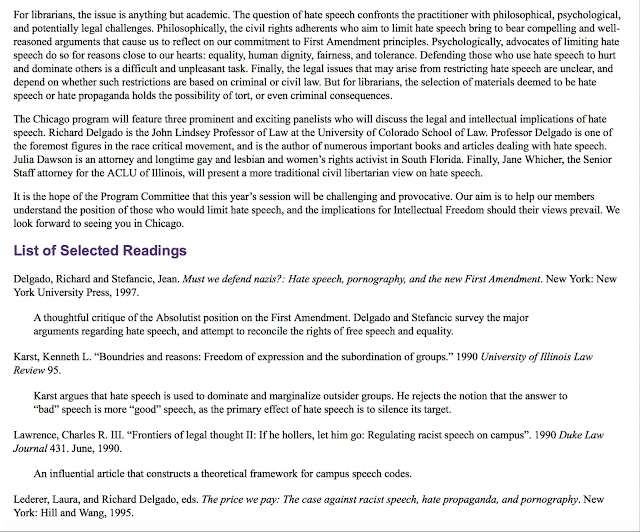 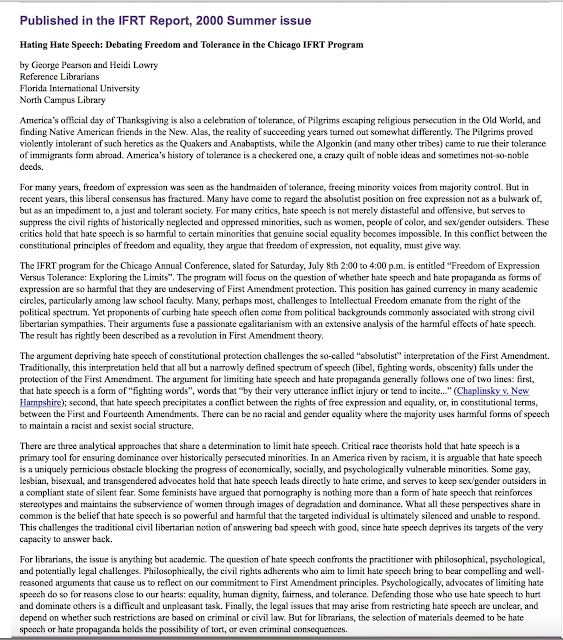 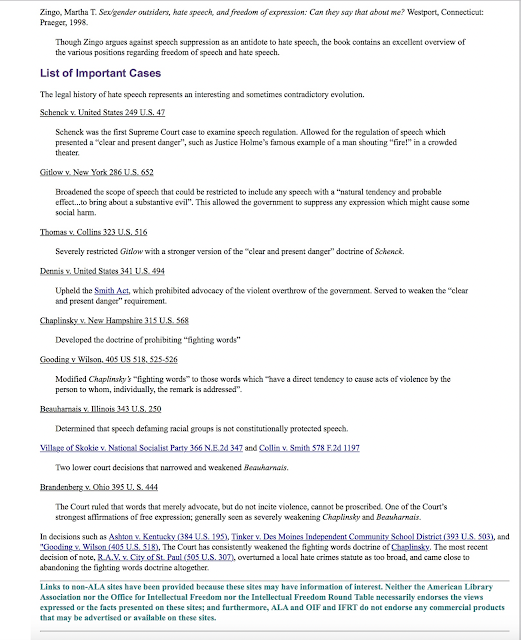 Should Library Associations get involved in political issues? 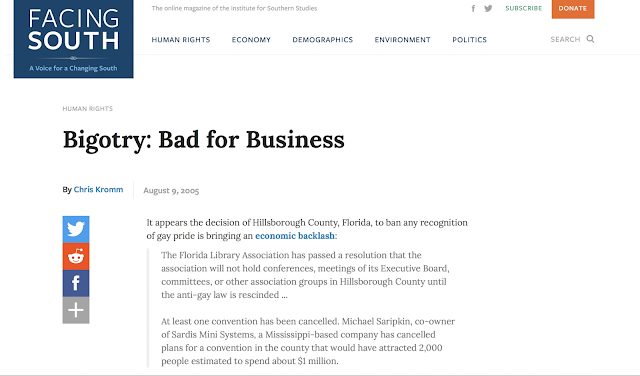 So look again at the program for the American Library Association. Do you see a Conservative representative? Does this mean the money we spend on our public libraries or those in our schools goes to promote a very liberal agenda?

These are some of the organizations listed as "Hate Groups by the Southern Poverty Law Center. 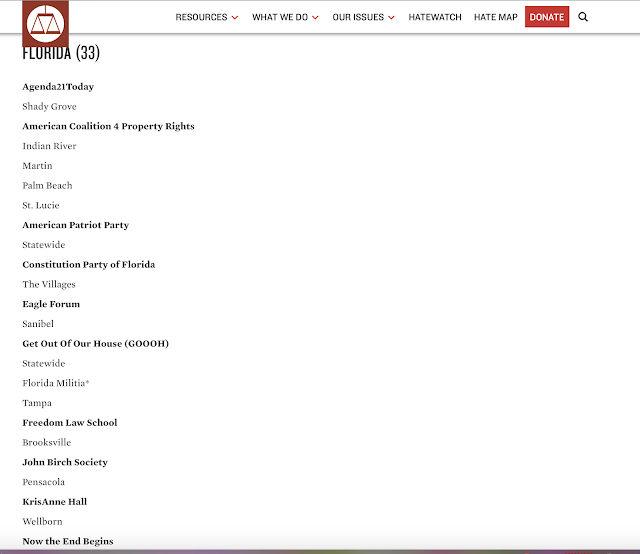 This disturbs me because I am the President of the Panhandle Eagle Forum. We are not a hate group. We do have a different perspective on many issues:


Other organizations under attack is the D. James Kennedy and the American Family Alliance. 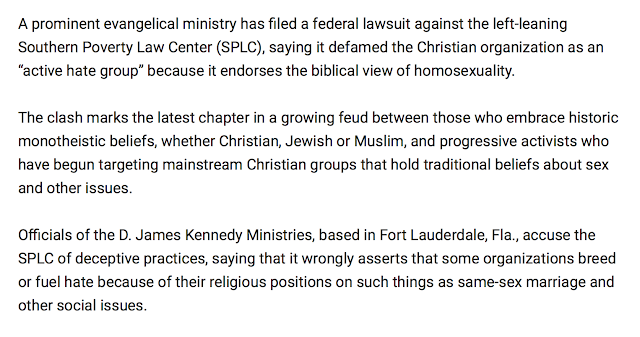 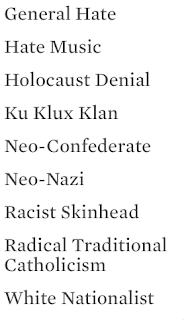 Really? What arrogance! Another example of contempt for the "Deplorables,"meaning anyone who disagrees with them. Perhaps you might fall in the category of GENERAL HATE. To be determined by the SPLC.

Now, I do not agree with all of the organizations listed, but I and the other members of the Eagle form support the Constitution and the Bill of Rights and defend the belief that "we protect the freedom to express 'the thought that we hate'."

Those people are dangerous. They are using governmental agencies to promote their agenda. Every organization that they identify as a hate group is a target for Antifa and we have seen that violence is their weapon against those who do not share their beliefs. 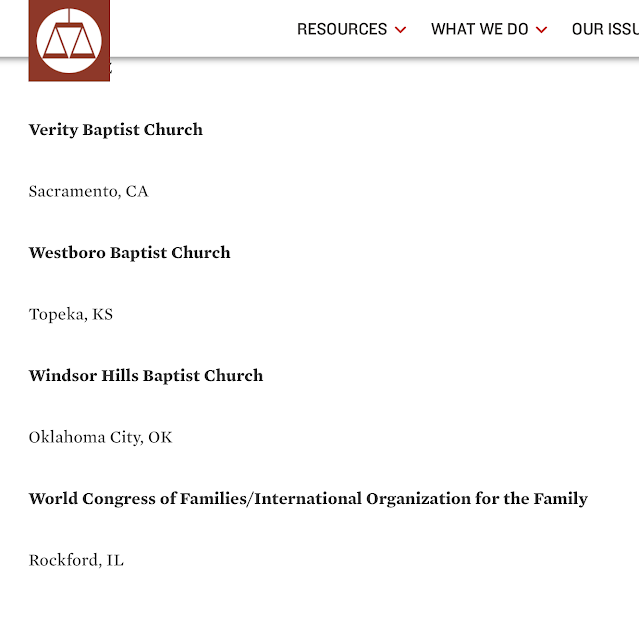 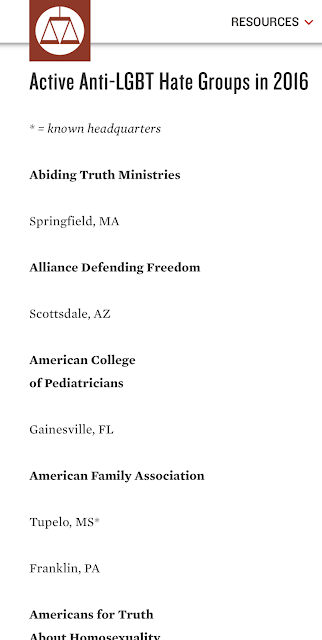 Ironically, the Southern Poverty Law Center does not label Antifa a hate group. I wonder why?

Does this look like they have a political bias? Do you see any Conservative Faith-Based organizations? Where does this lead? 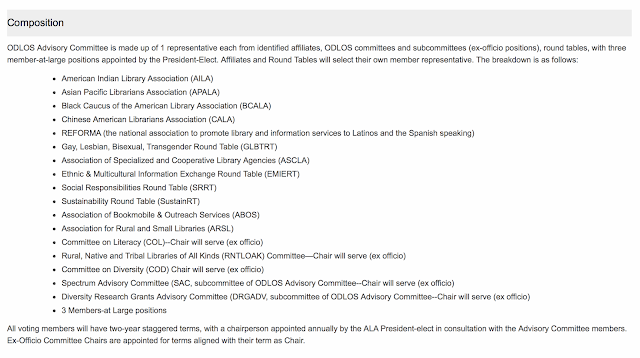