The "good people" at Charlottesville 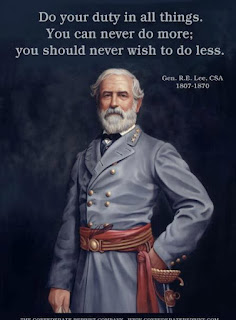 I think those Yankee newscasters must have never heard of the United Daughters of the Confederacy when they mock the President saying he imagines there were good people standing there. I imagine honorable ladies, daughters of the Confederacy, would have stood there in quiet vigil with a permit for peaceful protest at the removal of a memorial. They were the ones Trump was referring to.

Good people. Bastions of Charlottesville society. Contributors to all the good works of the community. Remembering the fallen, Black and white, who fought for the cause of states' rights as they saw it.
Unfortunately, there were also evil, hate-filled Klansmen and Radical White Supremacists (or those paid to pretend to be one) who care nothing for truth nor do they respect the man, Robert E. Lee, for he would have rebuked them saying:
"I believe it to be the duty of everyone to unite in the restoration of the country and the reestablishment of peace and harmony."
The ladies of the UDC would have had nothing to do with those people. The Klan and White Supremacists DO NOT reflect the opinions or beliefs of those who honor the memories of those who fought and died in that sad, sad brothers war.
But those ladies would revere Lee's words when he said, "A nation which does not remember what it was yesterday does not know where it is today."
So, why did Lee believe that states rights was worth fighting for?
Robert E. Lee feared:
"The consolidation of the states into one vast empire, sure to be aggressive abroad and despotic at home, will be the certain precursor of ruin which has overwhelmed all that preceded it."
"All that the South has ever desired was that the Union, as established by our forefathers, should be preserved, and that the government as originally organized should be administered in purity and truth."
And why, though asked by Lincoln to lead the Union Army, did Lee refuse?
"With all my devotion to the Union, and the feeling of loyalty and duty of an American citizen, I have not been able to make up my mind to raise my hand against my relative, my children, my home. I have, therefore, resigned my commission in the Army..."
I imagine those little ladies would see Robert E. Lee in a different light than the hate mongerers who co-opted their peaceful purpose. Those ladies remembered a modest man who was a top graduate of the United States Military Academy and an exceptional officer and military engineer in the United States Army for 32 years. During this time, he served throughout the United States, distinguished himself during the Mexican–American War, and served as Superintendent of the United States Military Academy.
I am sure those little ladies would have been as appalled by the radicals spouting hate and invectives standing apart and removed from their little group as the rest of us are. That is not what Lee stood for.
"Abandon your animosities and make your sons Americans!" he told those who would listen. Words that need to be remembered in this day and time when our children are taught to look at the flaws of our great country and not how those flaws have been forged in the fires of adversity to make us a stronger, better people.
"There are few, I believe, in this enlightened age, who will not acknowledge that slavery as an institution is a moral and political evil," Lee said.
Instead of erasing the memory of this evil by removing monuments, perhaps we should look beyond to where slavery still exists and attempt to eradicate it from our world today!
"What a cruel thing is war: to separate and destroy families and friends, and mar the purest joys and happiness God has granted us in this world; to fill our hearts with hatred instead of love for our neighbors, and to devastate the fair face of this beautiful world," Lee said.
"What a glorious world Almighty God has given us. How thankless and ungrateful we are, and how we labor to mar his gifts," he reminded his family and friends.
We would do well to remember his words rather than remove the memorial erected in 1924 by a man who made his fortune in Chicago real estate. He returned to Charlottesville where he was born and gave huge amounts to the University of Virginia and paid for the town library. He donated land for several parks, including one named for Lee and another for his own family. He also donated land for a black-only park named after African-American educator Booker T. Washington, according to Virginia's African American Historic Sites Database."
"A land without memories is a people without liberty." Lee wrote.
The statue of Lee, commissioned by McIntire and created by sculptors Henry Merwin Shrady and Leo Lentelli, was dedicated in 1924 in Lee Park. That urban space was renamed Emancipation Park a few months ago as part of the growing effort to challenge public honors for Confederate leaders.
I truly believe Lee would have approved the name change.
"So far from engaging in a war to perpetuate slavery, I am rejoiced that Slavery is abolished. I believe it will be greatly for the interest of the South. So fully am I satisfied of this that I would have cheerfully lost all that I have lost by the war, and have suffered all that I have suffered to have this object attained."
Lee himself would have endorsed the removal of the monument:
"As regards the erection of such a monument as is contemplated, my conviction is, that, however grateful it would be to the feelings of the South, the attempt, in the present condition of the country, would have the effect of retarding instead of accelerating its accomplishment, and of continuing if not adding to the difficulties under which the Southern people labor," Lee said.
Lee, who led in defeat as he did in War, would give this instruction:
"Let us pray for ourselves, that we may not lose the word “concern” out of our Christian vocabulary. Let us pray for our nation. Let us pray for those who have never known Jesus Christ and redeeming love, for moral forces everywhere, for our national leaders. Let prayer be our passion. Let prayer be our practice." 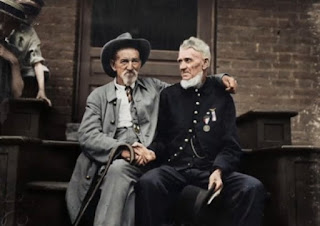 This is what the United Daughters of the Confederacy would have honored. And they are good people.

Posted by Sharman Ramsey at 9:55 AM
Email ThisBlogThis!Share to TwitterShare to FacebookShare to Pinterest