MULTICURALISM, THE NEW WORLD ORDER AND 1984: DID TRUMP THWART HE FULFILLMENT OF 1984? 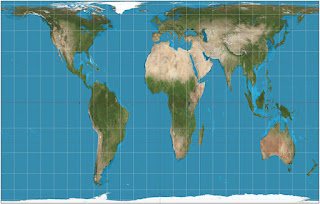 Multiculturalism, the New World Order and 1984: Did Trump Thwart the Fulfillment of 1984?

A world government is a world without borders, national sovereignty, constitutions, privacy, autonomy, individual liberties, religious freedoms, private property, the right to bear arms, the rights of marriage and family and a dramatic population reduction (two thirds). A world government establishes a slave/master environment wherein the state controls everything.oreign
Relations Committee on February 17th, 1950
More and more evidence of the advances made by the New World Order proponents led by Soros, Clintons, et. al. continue to pop up. They took a setback with Hillary's loss, but they have merely changed tactics.

Take this map for instance. As I have said before, behavior models attitudes and beliefs. How better to model school children than to see a world with no national borders.

"This is the start of a three-year effort to decolonize the curriculum in our public schools," said Colin Rose, assistant superintendent of opportunity and achievement gaps for Boston Public Schools, tells The Guardian.

"Eighty-six percent of our students are students of color," Hayden Frederick-Clarke, director of cultural proficiency for BPS. "Maps that they are presented with generally classify the places that they're from as small and insignificant. It only seems right that we would present them with an accurate view of themselves."

Traditional Mercator map delineate individual countries. Suddenly we have a map with no national boundaries coming to public school classrooms. It should be a symbol of globalism just as John Lenon's 1971 song its anthem.

Imagine there’s no countries; it isn’t hard to do
Nothing to kill or die for, and no religion too
Imagine all the people living life in peace.
You may say I’m a dreamer, but I’m not the only one.

I hope some day you’ll join us, and the world will be as one.

In a private, paid speech to a Brazilian bank on May 16, 2013, Hillary Clinton said: “My dream is a hemispheric common market, with open trade and open borders...”

Multiculturalism took the place of History and the great works of the Western culture upon which our American culture is founded. Multiculturalism, the existence of multiple cultural traditions within a single country, seems innocuous enough when first presented. But the ultimate conclusion of that ideology is that all cultures are equal. If that is true, why are third world peoples fleeing their homes and heading for those with a Western culture? And, if they refuse to assimilate into the culture to which they fled, why are they permitted to stay? In effect, we are encouraging the Balkanization of our schools and our country.

In listening to Nigel Farage on television the other night bemoan the plight of London these days, you discover the Balkanization of a once proud city. He said you can walk from one enclave to another within the city of London and never hear English spoken.

"A hundred years ago, President Teddy Roosevelt said, 'The one absolutely certain way of bringing this nation to ruin, of preventing all possibility of its continuing as a nation at all, would be to permit it to become a tangle of squabbling nationalities.'"(http://www.rense.com/general77/balk.htm Take time to read this article.)

The purpose of education and our public schools was once to educate our children about things that made our culture great, to teach them to communicate well by teaching them to speak and read English well, to write with proper grammar and assimilate our children into society respecting our country's founding fathers and documents and to be able to trace the history of these Western traditions that brought them about. They were taught to respect our flag and our traditions American.

But, with multiculturalism we are Balkanizing our country. Because of the failure of our education system, even the meaning of Balkanizing has been lost.

According to the Encyclopedia Britannica, Balkanization is the division of a multinational state into smaller ethnically homogeneous entities. The term also is used to refer to ethnic conflict within multiethnic states. It was coined at the end of World War I to describe the ethnic and political fragmentation that followed the breakup of the Ottoman Empire, particularly in the Balkans. (The term Balkanization is today invoked to explain the disintegration of some multiethnic states and their devolution into dictatorship, ethnic cleansing, and civil war.)

For those advocates of the New World Order who do not believe in nation states and do believe in globalization and One World Order and One World religion (Gaiea), balkanizing once stable countries succeeds in producing a sense of crisis.  Balkanize the country, use radical environmentalism to create fear and panic, then the globalists will use the courts to set up the situation where these folks have an answer. (See my article on Human Capital where David Hornbeck describes this process.) At that point, we will by consent deliver control to our self-anointed saviors.

Quotes from 1984 by George Orwell:

"BIG BROTHER IS WATCHING YOU." (I cannot help but think of Snowden's revelations.)

"The instrument (the telescreen it was called) could be dimmed, but there was no way of shutting it off completely."

"Then the face of Big Brother faded away again and instead the three slogans of the Party stood out in bold capitals:

WAR IS PEACE
FREEDOM IS SLAVERY
IGNORANCE IS STRENGTH

"And if all others accepted the lie which the Party imposed -if all records told the same tale — then the lie passed into history and became truth. 'Who controls the past,' ran the Party slogan, 'controls the future: who controls the present controls the past.' And yet the past, though of its nature alterable, never had been altered. Whatever was true now was true from everlasting to everlasting. It was quite simple. All that was needed was an unending series of victories over your own memory. 'Reality control', they called it: in Newspeak, 'doublethink'."

The invention of print, however, made it easier to manipulate public opinion, and the film and the radio carried the process further. With the development of television, and the technical advance which made it possible to receive and transmit simultaneously on the same instrument, private life came to an end. Every citizen, or at least every citizen important enough to be worth watching, could be kept for twenty-four hours a day under the eyes of the police and in the sound of official propaganda, with all other channels of communication closed. The possibility of enforcing not only complete obedience to the will of the State, but complete uniformity of opinion on all subjects, now existed for the first time.

Posted by Sharman Ramsey at 12:31 PM
Email ThisBlogThis!Share to TwitterShare to FacebookShare to Pinterest