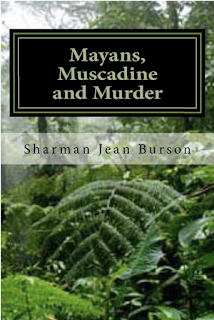 Thinking about Traffickers in Human beings and Body Parts is something I have thought about for a long time. It played a part in the last book of the Mint Julep Mysteries Trilogy,
Mayans, Muscadine & Murder:A Mint Julep Mystery.

By listing the actors I imagined when writing this novel after a DNA test showed potential DNA connections to Mayans and Guatemala, I hope you might be able to envision these events a bit better in the chapters I share with you.

I was sitting at a traffic light when Saroya introduced herself to me.

The noise of the crowd upon the plaza ball field reached --- as soon as Saroya topped the hill at the end of the path from the cenote. The jungle that surrounded Peru Waka barely muffled the raucous sounds of the crowd lured to the plaza by the wooden flutes, trumpets of wood, gourd and conch shell, and drums that signaled another ceremonial sacrifice. Someone would die today.
But not Inka. Ilyana promised to let Saroya know when Inka would be sacrificed. The distraction was timed well. Saroya would take that opportunity to slip into the palace and rescue Inka. She elbowed her way, pushing through as quickly as she could. If she could get to the palace, she would evade the guards and priests around Inka and somehow convince him to leave with her.
She looked up. K’inich Balam stood above the plaza at the top of the stairs of the ceremonial pyramid. He wore an embroidered cotton loincloth trimmed with feathers covered by a robe of jaguar skin and quetzal feathers; sandals; and an elaborate green parrot and quetzal feathered headdress as large as himself. His had puttied his nose to give it a beak-like appearance. Jade inset his teeth and ears. His eyes crossed appealingly as he stood before the crowd with his right arm raised displaying the paper fiber he drew through the foreskin of his penis that now dripped with sacrificial blood demonstrating his love and devotion to his people. He lifted a flaming stick and set fire to the paper which now brought smoke bathing over him. Dramatically, he breathed it in and then out as he watched the smoke carry his prayers towards the heavens while his people cheered.
Lady T’abi, now the darling of El Peru, dressed in a brocaded dress cinched at the waist, her teeth filed to a point with inlays of jade, and also appealingly cross-eyed, looked adoringly at her husband. She then drew a barbed stingray’s tail through her tongue. A priest handed her the paper rope that she pulled through the hole and held high for the people to cheer. K’inich Balam passed her the lighted taper and the smoke of the burning bloody paper filled the air.
Cheers rang out for the beautiful couple whose sacrifice and prayers for a reversal of the drought, victory over the advancing army, and a bountiful harvest inspired them. Though the true King and his wife were too ill to function, his son and daughter-in-law performed his duties admirably.
Saroya spotted Lady T’abi’s guards everywhere in the crowd. She had never seen such a presence in the crowds. Yik’in Chan K’awiil, Lady T’abi’s brother, appeared from nowhere surveying the crowd and signaling Montoya, his most trusted friend, the guard who frequently sat vigil when she visited her parents. Saroya bent down behind a big woman whose children carried rattles; small bells of copper, gold and clay; tinklers of shell and small stones to play along with the musicians. Saroya searched for another way through the crowd. Yik’in Chan K’awiil headed straight toward her!
From out of nowhere came Kish’s deep, now familiar voice. He placed a cloak about her shoulders and pulled the hood around her head, shielding her face. He pulled her close kissing her with a passion that seemed to others to join in the near orgiastic ecstasy of the crowd. She placed her hands on his chest to push him away, but his lips moved to her ear and he whispered, “We must blend into the crowd. Lady T’abi has the full guard watching for you.”
“But, why? She thinks I’m dead!” she said, trying not to succumb to the pounding music and the closeness of this man whom she had admired from afar for so long as a ball player and come to respect and trust as a man. And if she were to be honest to herself … desire … Her arms lifted to wrap around his neck as his lips traveled down her neck.
She felt him stiffen when he lifted his head to look beyond her.
“When she could not find you, Ilyana came to me,” he said. “She said Tabi did not trust you not to stay dead and that she was sure you would try something. So today had to be the day before word could get out.”
She lifted her eyes to his and knew. She whirled just as the priests laid the drugged boy painted with blue dye upon the ceremonial altar on the pyramid above them. She struggled in Kish’s embrace as her brother K’inich Balam lifted the obsidian knife and looked to his wife, Lady T’abi. Their brother Inka turned his head and found Saroya in the crowd. Recognition flickered in his blue eyes and was replaced by fear.
Inka’s lips formed her name. Lady T’abi nodded and K’inich Balam plunged the obsidian knife into Inka’s chest.
Saroya screamed and fainted.

In the parlor, all eyes focused on the slender, dark haired beauty still dressed as she had been for the Bachelorette Party in her short flirty skirt and the peasant blouse that hung off of one shoulder. Estrellita pulled her hair to one side plaiting it and seeming unconcerned.

He heard Dabney say, “I only wonder why you waited until now and why here to retrieve your child.”

“It’s a long story,” she said. She looked at her diamond crusted Rolex and glanced toward the rain pounding on the window. “There’s time,” she said to Alberto who nodded.

“I tracked Julio in New Orleans for my father. Julio willingly gave the physician’s assistant from Singapore who has become my father personal aide blood and tissue samples. Freddie had already provided samples from Stanley years ago. I already knew Stanley was the best match for me.”

“Father did well for awhile. Just recently he suffered a severe setback and it was time to bring Julio in. I allowed Julio to join me on the tour just so I would know exactly where he was in case Father needed him immediately.”

“What kind of doctor would agree to such a thing?” Dabney asked.

“One who enjoys a good life, I suppose,” said Estrellita. She shrugged and rolled her eyes.

“But why kidnap Dabney?” Stanley asked.

Estrellita said, “She came out the door close behind Julio. She would have seen what was happening and would have raised a ruckus.”

“Father became good friends with a surgeon at a hospital in Mexico when I was born with a congenital defect in my heart. Fortunately, the surgery and repair was successful,” she assured us. “Until now.”

“They visited back and forth over the years. The doctor was associated with some Heart Center in Singapore. His cousin was a physician’s assistant with one of their major physicians there. Father brought him to Mexico and paid him lots of money to just attend him. They were successful in maintaining father’s health with drugs, but they knew it was only a matter of time. I overheard them discussing transplants and remember the doctor telling father that family members made the best donors. I heard my father say ‘but it is more successful if donors are of the same sex, I understand.’”

“I had a friend, Renata Ramirez, who moved to the United States years ago. We were pen pals for a while,” she said smiling at her adroitness in carrying it all off. “I had her address. She lived in New Orleans. I told Renata and her mother that I had gotten pregnant and my father would kill me.”

“Renata joined the Army before I contacted her. But, they wanted to help me. Renata’s mother is a midwife and so she delivered Rosalie. We all agreed that Senora Ramirez would take Rosalie and care for her as if she were her very own grandchild until it was safe for me to acknowledge her and bring her to live with me.”

“When money I wired was not retrieved. I had someone investigate and discovered that Senora Ramirez had died suddenly. No one knew where the child or her mother had gone.”

“So, now it is my turn to question. What brought all of you out to Stanley’s house on a night like this?”

She indicated to one of the black suited men. He removed the gag from my mouth.