VIEWPOINTS YOU WILL NOT HEAR OR READ ON THE MAJOR MEDIA

Illinois voted on the wrong side of women’s rights by voting for an amendment that will harm women and their unborn child. The language of our laws matter and the language of this poorly written, vague amendment will take away the ability to recognize essential biological differences between men and women.
As a result, laws, and policies that benefit women will be overturned and abortion rights will be entrenched in our Constitution. The public must wake up and see through the false statements of the supporters of the ERA. Women are already guaranteed equal rights through the equal protections guaranteed to all persons under the 14th amendment. The Supreme Court has already recognized and ruled favorably for women based on the 14th amendment. Women will receive no additional benefits from the ERA. Instead, they will see their rights and benefits taken away as they are forced to be treated exactly like men with no exceptions allowed.
Elise Bouc
ebouc7@gmail.com
Protections for women under current law would be annulled.

FOR EXAMPLE:
1. The Tender Age Presumption that children are better off with their mothers in a divorce situation will be nullified.
2. Our young daughters will be drafted should a draft be reinstated.

3. The ERA is a poorly written amendment that would not put “women” in the Constitution; it would put “sex” in the Constitution. Sex has many definitions besides gender.
4. Hundreds of good state laws would be overturned — such as sex segregated prisons, women’s shelters, and legal accommodations for pregnant women.
5. ERA would mandate taxpayer-paid abortions and equal representation of women in military combat and selective service.
6. Passing ERA would take away plenty of rights that women enjoy; but nothing in ERA would ever give women a pay raise or stop any sexual harassers.

ERA would not be “symbolic,” but would cause real harm to real women by mandating that men and women are interchangeable in every circumstance. I am proud to continue the fight against this destructive amendment that my mother, Phyllis Schlafly, led.
— Anne Schlafly Cori, Alton, Ill.
Oddly enough, it was thought that when women got the vote, there would be a higher standard of morality in politics. That they would uphold traditional values engendered by Church, Family and Country. Instead, before our very eyes, with the Feminist leaders of our country we see the demise of morals, the vilest of language, the dismantling of family and an abandonment of patriotism. 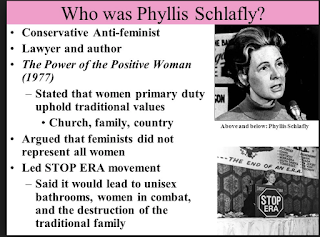 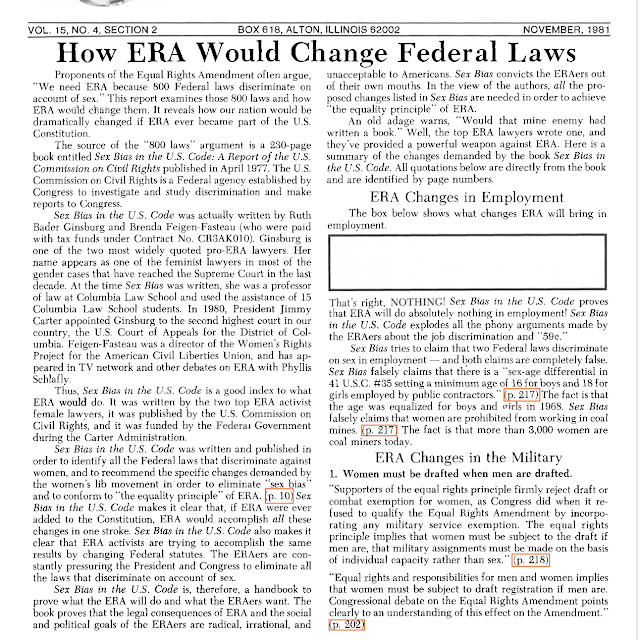 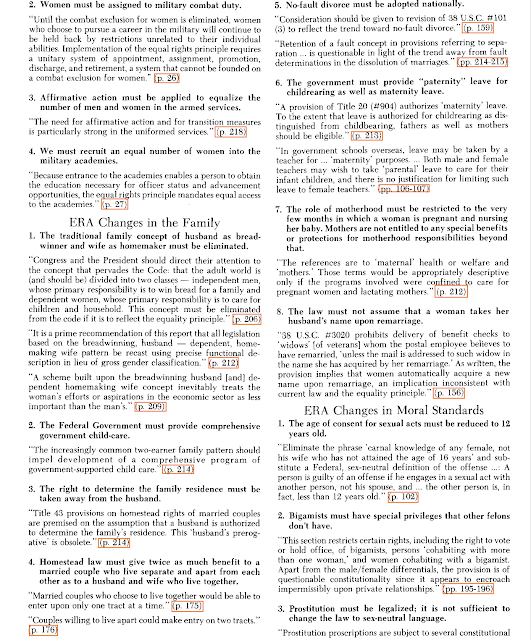 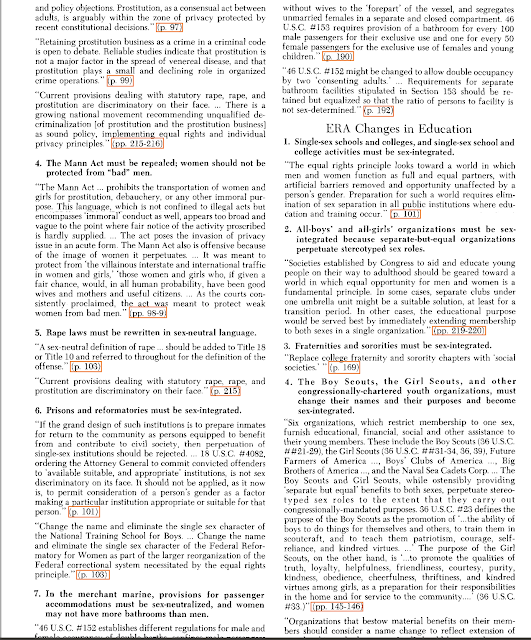 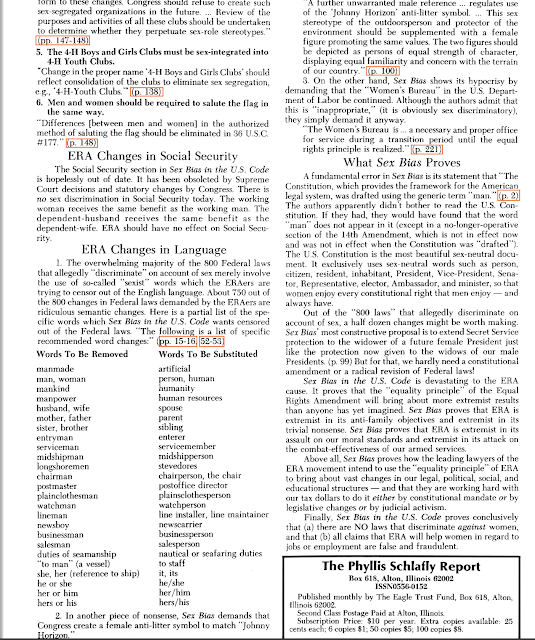 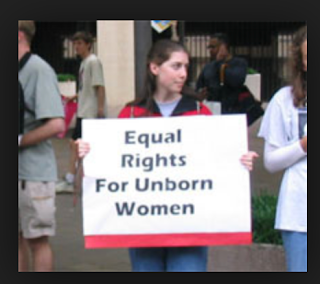 THE EQUAL RIGHTS AMENDMENT AND ABORTION

Re: "Equal Rights Amendment" and Abortion
Dear Member of Congress:
Today, Congresswoman Carolyn Maloney and others intend to reintroduce the proposed "Equal Rights Amendment" to the Constitution. The National Right to Life Committee (NRLC) urges you not to co-sponsor or otherwise support this measure in its current form. Recently courts in two states have construed state ERAs to require tax-funded abortion on demand B rulings that demonstrate the absolute need to attach an "abortion-neutral amendment" to any such resolution.
The Maloney resolution would add to the Constitution the following prohibition: "Equality of rights under the law shall not be denied or abridged by the United States or by any state on account of sex." This is very similar to the language of the ERA which New Mexico added to its state constitution in 1973, which says, "Equality of rights under law shall not be denied on account of the sex of any person." On November 25, 1998, the New Mexico Supreme Court B by a vote of 5-0 B ruled that such language prohibits the state from restricting abortion differently from "medically necessary procedures" sought by men, and the Court ordered the state to pay for elective abortions without restriction under the state=s Medicaid program. (NM Right to Choose / NARAL v. Johnson, No. 1999-NMSC-005)
In its ruling, the New Mexico Supreme Court merely adopted the construction of the ERA urged upon it by Planned Parenthood, the National Abortion and Reproductive Rights Action League, the ACLU, the Center for Reproductive Law and Policy, and the NOW Legal Defense and Education Fund. The doctrine that the ERA invalidates limitations on tax-funded abortion was also supported in briefs filed by the state Women's Bar Association, Public Health Association, and League of Women Voters.
In addition, on December 7, 2000, the Texas Court of Appeals (Third District) ruled that the state=s prohibition on tax-funded elective abortions violated the Texas ERA. That ruling is on appeal to the Texas Supreme Court. The Texas ERA reads, "Equality under the law shall not be denied or abridged because of sex . . ." (Low-Income Women of Texas v. Bost, No. 03-98-00209-CV)
None of this comes as any surprise to knowledgeable observers. During the 1970s and 1980s, many pro-ERA polemicists insisted that there was "no connection" between ERAs and abortion, but NRLC warned otherwise. As we predicted, pro-abortion advocacy groups have increasingly employed the ERA-abortion argument in state courts, and in New Mexico and Texas we see the devastating result of enacting an ERA that does not include explicit abortion-neutral language.
If any law that treats abortion any differently from any other "medical procedure" violates traditional ERA language, then no significant limitation on abortion could survive under such an ERA. Under this doctrine, the proposed federal ERA would invalidate the federal Hyde Amendment and all state restrictions on tax-funded abortions. Likewise, it would nullify any federal or state restrictions even on partial-birth abortions or third-trimester abortions (since these are sought "only by women"). Also vulnerable would be federal and state "conscience laws," which allow government-supported medical facilities and personnel -- including religiously affiliated hospitals -- to refuse to participate in abortions.
NRLC would withdraw its opposition to the ERA if the following abortion-neutralization amendment -- originally proposed by Congressman Sensenbrenner in 1983 -- is added:
"Nothing in this article [the ERA] shall be construed to grant, secure, or deny any right relating to abortion or the funding thereof."This proposed revision would not change the current legal status of abortion, nor would it permit the ERA itself to be employed for anti-abortion purposes. Rather, the revision would simply make the ERA itself neutral regarding abortion policy.
Please contact the NRLC Federal Legislative Office (202-626-8820, Legfederal@aol.com) to obtain a copy of the New Mexico Supreme Court ruling, the Texas court of appeals ruling, or other documentation on the ERA-abortion connection.
Sincerely,
Douglas Johnson
Legislative Director

History. Illinois, what were you thinking? The Harvey Weinstein's of the world fed on the fungus of the FEMINIST LIBERATION MOVEMENT. Just what morals and values DO feminists espouse? 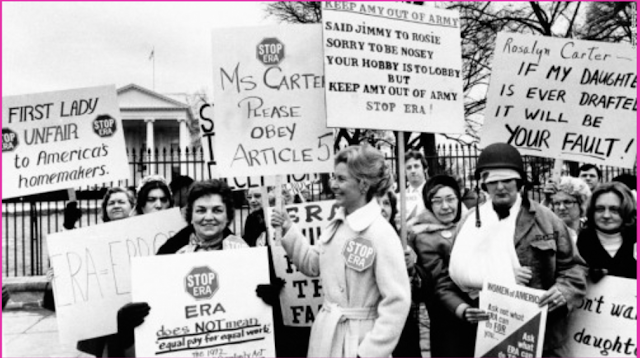 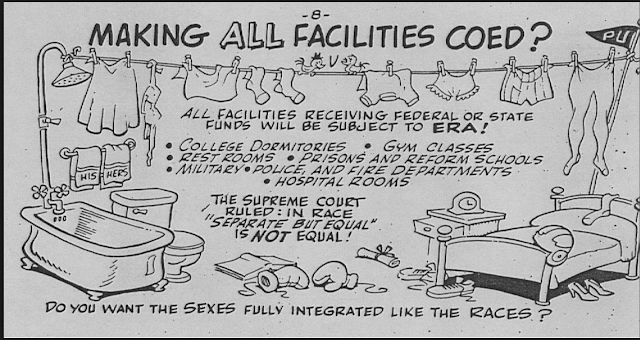 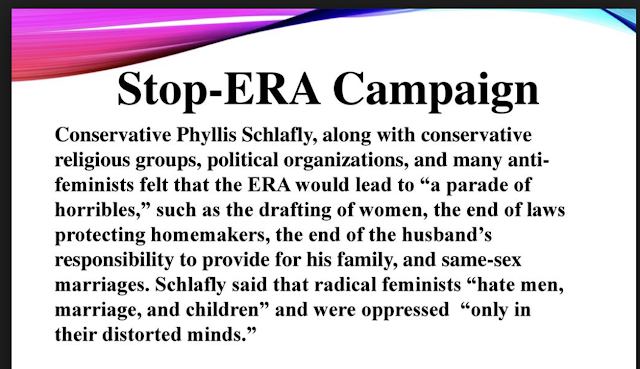 This is the confused, convoluted world we leave our children? 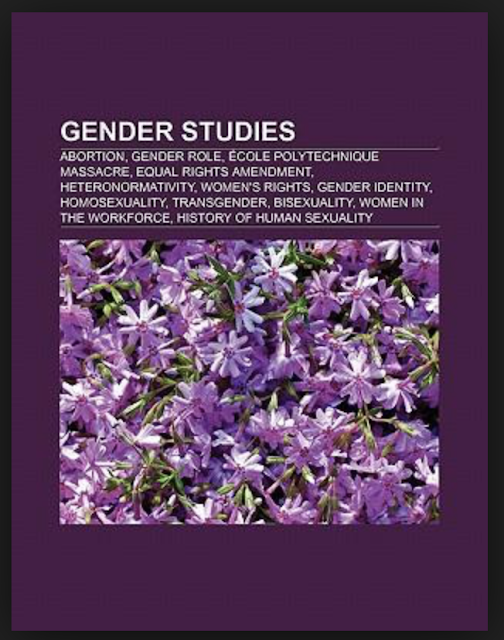