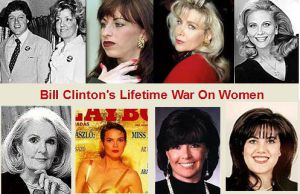 Misogynist seems to be Trump's enemies' favored word of the week.

Melania Trump says her husband treats women just like he treats men. Does that make him a misogynist or are feminists reaping what they have sown? Feminists protest that they want equality. Then a man treats them with the same blunt treatment with which he would treat a man and the whining begins. How dare he speak thus to a woman?

Feminists proclaim that in order to succeed a woman must do everything a man can do only walking backwards and wearing high heels. But why is she wearing high heels? They are certainly not comfortable. Why does she wear short skirts, false eyelashes and flip her lovely long hair when she wants to be treated like a man?

I suggest she expects to use her femininity and be treated like a lady, using sex appeal plus cultural expectations to elicit expected gentleman's behavior while proclaiming she wants equal treatment.

Juanita Brodderick who claims to have been raped by Bill Clinton says Hillary confronted her and said, ‘I just want you to know how much Bill and I appreciate the things you do for him.’ “And she said, ‘Do you understand? Everything you do.’’’
"What really went through my mind at that time is ‘She knows. She knew. She’s covering it up and she expects me to do the very same thing.’”

Kathleen Willey states that Hillary ‘wrote the book on terrorizing women.’ Gennifer Flowers, Bill Clinton's 12 year mistress, accused Hillary of being “an enabler that has encouraged him (Bill) to go out and do whatever he does with women.”

So, perhaps women can be misogynists as well. Perhaps Hillary simply has contempt for women who are so gullible as to vote for a woman simply because of her gender. Equality can and should go both ways.
Posted by Sharman Ramsey at 4:21 PM
Email ThisBlogThis!Share to TwitterShare to FacebookShare to Pinterest