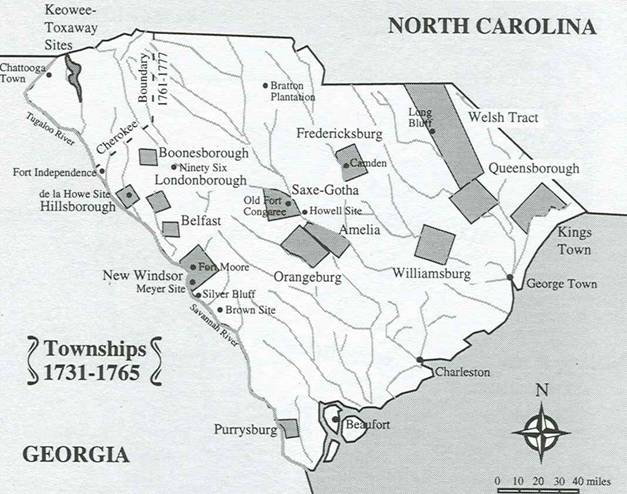 Notice the location of Silver Bluff on this map. Take note of Ninety-Six. My own ancestor, Vashti Vann Jernigan, of Cherokee descent, came from the Ninety-Six District.

Andrew Jackson sent Vashti and her husband Benjamin Jernigan, said to have been a neighbor of Andrew Jackson, to Burnt Corn Springs to herd cattle for the expected conflict with the Spanish over West Florida.  He sat at her table and ate food she had prepared and then sent her cousins, descendants of Chief James Vann, on the Trail of Tears.

Irish immigrant George Galphin operated a large-scale frontier trading post at Silver Bluff. He owned 40,000 acres of land in South Carolina and Georgia, a large number of livestock, and 128 slaves, some of whom were his own children.

Dr. Thomas Galphin Holmes who survived the Massacre at Fort Mims by escaping through a hole chopped in the pickets was the grandson of Galphin and his quadroon second wife, the illegitimate daughter of Moses Nunes, a wealthy Jewish merchant and an Indian woman. Their daughter had married John Holmes, an Irishman who had worked with Galphin in the fur trade.

Samuel Mims, around whose home the fort was built, was "one of the pack-horsemen of the Honorable George Galphin." Mims built his home and operated a ferry on the Federal Road, the primary road through the Creek country. Charles Weatherford, father of William Weatherford (Red Eagle who led the attack on Fort Mims) came to the Creek Nation prior to 1778 and shortly after the close of the American Revolution, in company with Samuel Mims.

South Carolina was probably the origin of many who took the Federal Road through Georgia. Now known as the "OLD FEDERAL ROAD," this primary travel route was conceived and built to connect Fort Wilkinson, near Milledgeville, Georgia, to Fort Stoddert, an American outpost north of Mobile, Alabama. Developed from the 1806-11 postal horse path that followed earlier Native American paths, the Federal Road subsequently became a primary travel route for pioneers going to the Mississippi Territory. The Federal Road functioned as an important link between Washington, D.C., and New Orleans. Early settlers, of the area now known as Monroe, Escambia, Wilcox, Butler and Conecuh Counties, in Alabama included the Middleton, Wardlaw, Bonham, Travis and many other South Carolina families.