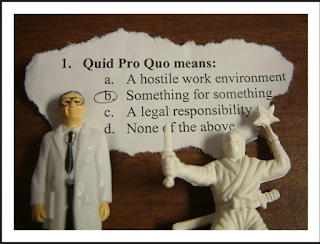 I wonder where the Republicans are hiding.

We have a situation where the entire country wants to know where this ridiculous RUSSIA investigation came from. What about those troll farms? What about CrowdStrike? All in the Ukraine?

When the duly elected president talks to a Ukrainian leader and asks for assistance on a presumed secure phone so that those in his administration delegated to do this search might perform their legal duties, the Democrats in UNISON cry foul. The Republicans sit back with their napkins in their laps and their pinkies raised talking about good manners, fairness and open-mindedness and the Democrats well-trained in the Alinsky method attack with guerrilla warfare. 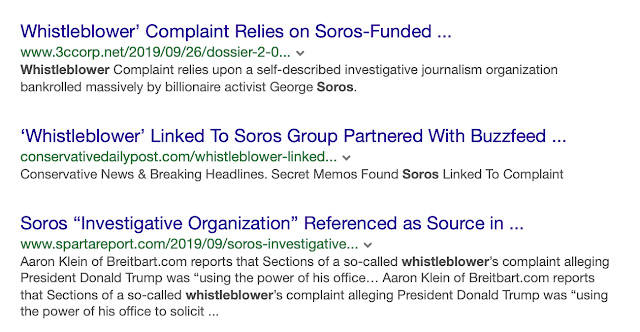 THE BEST DEFENSE IS A GOOD OFFENSE and the Democrats know this. They know we are in a battle for the heart and soul of America. The Republicans still play at politics like the Brits in the Revolution with Marquess of Queensbury Rules.
Where is the outrage over the spy in the White House? Over a traitor (a suspected John Brennan trained, CIA operative) plotting another attack in the coup. This "whistleblower" relies upon a self-described investigative journalism organization bankrolled massively by billionaire activist George Soros. And alarm bells don't go off?
Biden relates: "They said, ‘You have no authority. You’re not the president—the president said’ … I said, 'Call him.' I said, 'I’m telling you, you’re not getting the billion dollars.' And so, Biden implicates Obama who is now complicit in this pay for play scheme. 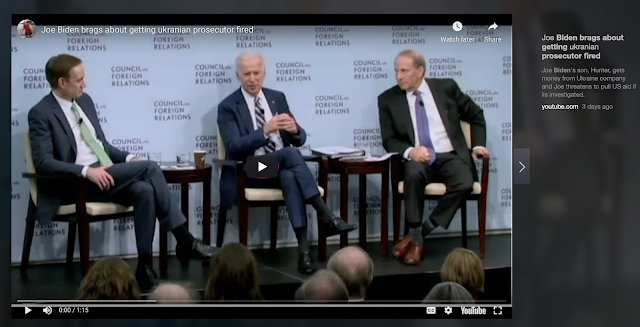 But Biden is now doomed to the trash heap of history because of his own arrogant braggadocio. They think they have Trump on the ropes for digging up dirt on a "political opponent", Hillary wants the same protections. The media permits them to frame the argument -- once again.
As a candidate, digging up truth as to her involvement in the infamous Steele dossier, etc., the coup on a duly elected president, will be considered investigating an opponent in the presidential election. So the Republicans run for the hills.
Paul Ryan now sits on the Fox Board and will try to make Fox into another Joe Scarborough show. Neil Cavuto and Shepherd Smith lead the way.
The President and a mere handful of Republicans take them on. If the Democrats win, we will be left with pitchforks and torches to defend ourselves against the onslaught of the Democrat attack on speech, borders, the rule of law, the concept of innocent until proven guilty, freedom of religion, the right to bear arms and national sovereignty.
Posted by Sharman at 9:00 AM No comments:

THE GREAT POLITICAL AND SOCIAL DIVIDE: A PERSONAL EXCHANGE OVER FREE COLLEGE EDUCATION 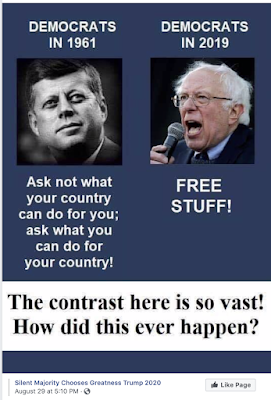 The other day, I posted this on my Facebook page. The responses to this are quite telling about the great political and social divide in our country.

Another commentator is the son of a hairdresser who borrowed money for college himself with children who worked hard and made good grades and earned scholarships to pay for their own degrees in fields that would then provide them a good living.

And then all is summed up by a Middle School Math teacher with a degree from a private Baptist college.

All of these people are my friends and I respect them. But the different attitude toward education is quite telling of the political and social divide in this country. You may be able to recognize the Vassar/Harvard educated Hillary anointed Deplorables in this conversation.

MIKE  Sharman Burson Ramsey It’s hard for young people to do what they can for our country when our banks hold them in debt peonage because they had the effrontery to try to improve their education. They didn’t have that problem in Kennedy’s day. In Bernie’s day, they won’t either, because Bernie will make the rich again pay their fair share of taxes. Bernie doesn’t promise free stuff. He promises that the rich will pay their fair share for the stuff we all need.

NORBERT  Mike, I borrowed money to finish college. I worked my way through until I had to have help to finish. I paid it back. I did not look to anyone else, rich or otherwise, to pay off my loan. It took me 7 years to get through college.....I do not want anything I cannot get for myself. It has everything to do with personal responsibility. They borrowed it and gave their word they would pay it back. So pay it back. Like I did.....If they really want to improve themselves, then let them do like my children did. My children applied themselves, studied very hard, made very good grades and went to college on full scholarships. Once there they applied themselves and made the deans list over and over again. My son is completing his PHD in Wireless Computer Networking Cybersecurity on a Department of Defense grant. Because he worked very hard and applied himself. If they want to improve their education, then they should really work at educating themselves. There are oceans of very rich people and organizations that donate hundreds of millions in scholarships available to those will ig to apply themselves.

Sharman Burson Ramsey Debt peonage? In our day people sensibly attended colleges their parents could afford or worked and went to school paying their own way to get degrees in areas they knew were employable. No one expected someone else to be responsible for their own self-indulgence in getting degrees in areas they “loved” but wouldn’t pay the bills. One of my friends got his engineering degree through work-study. Others went into the military to EARN money for college. Bernie promises to take money from working people who have worked hard and earned success to buy votes from semi-literate ego centric narcissists who think they deserve others to support them in continuing their self-indulgence.

Sharman Burson Ramsey BTW Norbert’s mother was a hairdresser with a shop in her home where I grew up knowing her children (including Norbert) because that is where mother got her hair done. A finer woman never walked the face of this earth. Her children all have her work ethic. I am blessed to know them.

MIKE. You folks don’t seem to understand the magnitude of the problem. If you or I had had the level of debt that recent generations are experiencing, we wouldn’t be the Horatio Algers you like to paint yourselves. Young people are saddled with this debt, which prevents them from taking advantage of the opportunities you and I had, because the government allowed predatory lenders to invade the school loan business, after the government withdrew massive support for public education. Student debt now exceeds credit card debt in this country. Did you know that? And there is no escape, thanks to federal legislation sponsored by Joe Biden, which denies bankruptcy protection to student borrowers. You can comfort yourselves with feel good stories about your own escape from relatively minor debt, but a country that cripples its youth in this manner invites a rueful reckoning, especially in a world economy that has recognized that public education should be free, limited only by questions of capacity and merit.

Sharman Burson Ramsey The government is responsible? Where does personal responsibility begin? How did these young people get "saddled with debt"? Did someone put a gun to their heads and take them down to the bank (or wherever) and hold their hand to sign their names to a promissory note? How did the government "cripple its youth" with this debt?
Feel good stories? My mother took her Sunday school teacher down to the bank with her to recommend her for the debt she incurred borrowing money to go to nursing school. Her mother was a widow with five children during depression years. Mother worked hard to pay that debt that was not to her "a relatively minor debt". If you do not go into a field where you can pay your debt you should not borrow the money! The problem here is with enablers who listen to these whiney infants (who refuse to grow up or take personal responsibility) and continue to make excuses for their bad choices. Mother's was a debt of honor and she repaid it.
Where has the word honor been in this discussion? Totally missing. The concept of a man's word is his bond has disappeared from the lexicon. Perhaps those spoiled brats ought to get a job that will actually enable them to pay their debts rather than pretending to be such an asset to the world simply because they were born!
"...especially in a world economy that has recognized that public education should be free, limited only by questions of capacity and merit." World economy? Does this world actually promise free education to free loaders? If I had known that I would have stayed in school! My mother and daddy had different expectations, however.
What kind of world do those of you who advocate cultivating more of these dependents expect to create with this "you owe me" attitude?"
I see the crippling coming from a different front.

MIKE  Sharman Burson Ramsey No, Sharman, your world, around which Trump wants to build a wall, no longer promises free public education to hardworking students. In your world, public education, like pretty much everything else, has been privatized and monetized (Betsy DeVos is one of the predators). But if you will look beyond the wall, you will find that many countries in THAT world do indeed promise free education to their hardworking and very honorable young people. Those folks understand that public education is good for everyone.

NORBERT  Mike, if they have capacity and merit, then they will be eligible for scholarships..........like my kids....it is all about focus, concentration, persistence and hard work. At the end of the day, there is NO free ride. How much of your income have you put out there for scholarships ????

MIKE:  NORBERT In civilized countries, public education is indeed free and seen as a benefit to the whole society, just like free health care.


Sharman Burson Ramsey With the number coming here to get an education I guess that shows you what that free education is worth.

EMILY You borrow money....you pay it back. Case closed


Why am I reminded of Plato's philosophy on Philosopher Kings being rulers?

Plato argues that a specific education, available to few, will allow these few to become philosophers. This would create a ruling class that is not representative of the ruled. These philosophers will be the kings. And, of course, Plato was a Philosopher.

I guess he also would have had the Deplorables supporting that elite.

Posted by Sharman at 7:09 AM No comments: