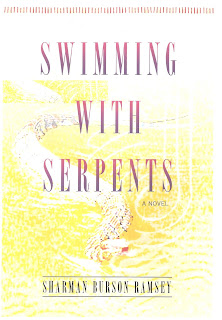 Swimming with Serpents was inspired by the author's discovery of her Native American heritage. Her fourth great grandmother was Cherokee, niece of Chief James Vann. The novel also draws inspiration from the true love story from that era.

Star-crossed lovers Cade Kincaid and Lyssa Rendel meet as children traveling with a pack train into Creek country. Both are of mixed blood.Ten years later Lyssa manipulates a wedding based on a childhood promise after which the two are immediately separated by the Creek War. They must survive the Massacre at Fort Mims, ensuing Creek War, and the brutality of the time to reunite. Savannah Jack, the cruelest and most frightening of all the villains of the age, captures Lyssa Rendel, Pushmataha’s adopted daughter. Lyssa valiantly draws Savannah Jack from the glade where the children she has rescued and nursed back to health are secluded after the murderous Red Stick attack and vicious depredations committed on the nearly 500 inhabitants of the 1-acre stockade built around the once-gracious plantation home of Samuel Mims.

Cade knows Savannah Jack well. He was himself captured by this blood-thirsty Creek years ago when he was associated with William Augustus Bowles who sought to set himself up as the emperor of the Creek nation upon the death of Alexander McGillivray.

The compelling stories of the individuals caught up in the seismic forces of conflicting cultures conveys a human drama of war weaving a tale the theme of which is as applicable today as it was 200 years ago when this pivotal event occurred August 30, 1813. “If war is the will of God—a judgment upon evil—why must the innocents perish?” From the recesses of time—from the infancy of our new nation— veterans of that revolution fought another war. The voices of those forgotten people cry out to have their lives remembered. This is their story.