Our WOKE World and

I have been re-reading George Orwell's 1984 (published in 1949) and find it almost prophetic. For example:
1. The voice came from an oblong metal plaque like a dulled mirror which formed part of the surface of the right-hand wall. Winston turned a switch and the voice sank somewhat though the words were stilled distinguishable. The instrument (the tele screen, it was called) could be dimmed but there was no way of turning it off completely.
(Watch the movie SNOWDEN and learn of how televisions not only broadcasts in but broadcasts out as well). 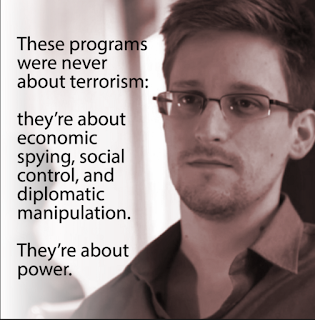 2. Only the THOUGHT POLICE mattered. p. 2
3. WAR IS PEACE
FREEDOM IS SLAVERY
IGNORANCE IS STRENGTH p. 4
4. It was always the women, and above all the young ones, who were the most bigoted adherents of the party, the swallowers of slogans, the amateur spies and the losers out of unorthodoxy.
p. 10 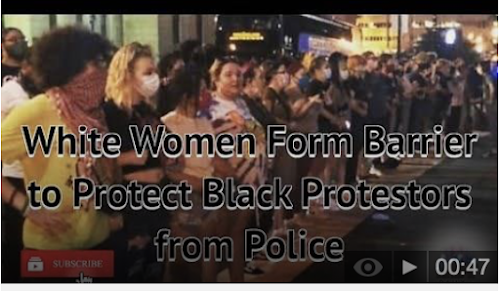 Goldstein was depicted as the greatest enemy of Big Brother.
He abused Big Brother, denouncing the dictatorship of the Party, he was demanding the immediate conclusion of peace with Eurasia, he was advocating freedom of speech, freedom of the press, freedom of assembly, freedom of thought, he was crying hysterically that the Revolution had been betrayed.
5. TWO MINUTES HATE p. 13
"Before the Hate had preceded for thirty seconds, uncontrollable exclamations of rage were breaking out from half the people in the room."
(Today's major media Nightly news now CNN10 broadcast into classrooms across America. Remember that "technology" you raised money for?) 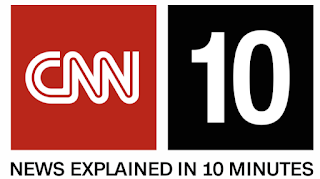 p. 14 Within thirty seconds any pretense was always unnecessary. A hideous ecstasy of fear and vindictiveness, a desire to kill, to torture, to smash faces in wit a sledge hammer seemed to flow through the whole group like an electric current, turning one even against one's will into a grimacing, screaming lunatic.
Ask your children/grandchildren if CNN 10 is broadcasting into their classrooms. Enlightened children have told their parents/grandparents that it is "brainwashing", but one Middle School student told his grandmother that he did not like Trump any longer because he was a "bad" person. "Where did you hear that?" his grandmother asked. That was when he told her about the 10 minutes of CNN being broadcast into his classroom. CNN10 has taken the place of the old voice of indoctrination Channel One.
Aren't you glad you raised money for "technology in the classroom"? 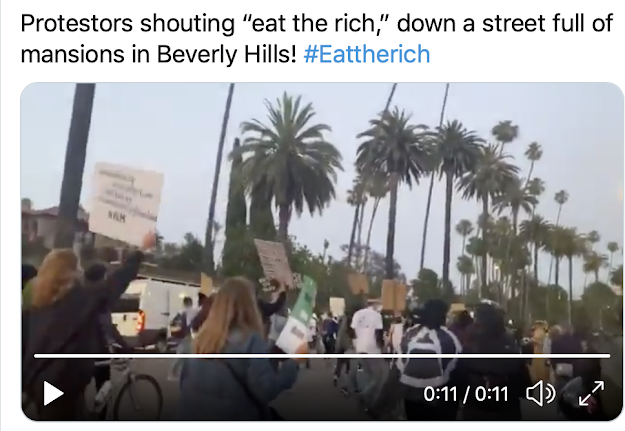 p. 16. It was an act of self-hypnosis, a deliberate drowning of consciousness by means of rhythmic noise.
6. The sacred principles of Ingsoc, Newspeak, doublethink, the mutability of the past p. 27
Thoughtcrime does not entail death: thoughtcrime IS death. (Ingsoc is English Socialism) 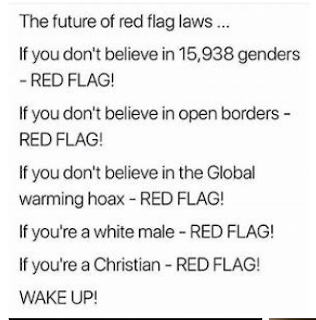 7. p. 34. If the Party could thrust its hand into the past and say of this or that event, it never happened--that surely, was more terrifying than mere torture and death.
.... "Who controls the past", ran the Party slogan, "controls the future; who controls the present controls the past."
...Reality control they called it; in Newspeak, "doublethink."
8. p. 35. His mind slid away into the labyrinthine world of doublethink. To know and not to know, to be conscious of complete truthfulness while telling carefully constructed lies, to hold simultaneously two opinions which cancelled out knowing them to be contradictory and believing in both of them, to use logic against logic, to repudiate morality while laying claim to it, to believe that democracy was impossible and that the Party was the guardian of democracy, to forget whatever it was necessary to forget, then to draw it back into memory again at the moment when it was needed, and then promptly to forget it again, and above all, to apply the same process to the process itself--that was the ultimate subtlety; consciously to induce unconsciousness, and then, once again to become unconscious of the act of hypnosis you had just performed. Even to understand the word "doublethink" involved in the use of doublethink.
8. Winston's job was to rectify the original figures by making them agree with later ones.
...p. 40 Day by day and almost minute by minute the past was brought up to date. In this way every prediction made by the Party could be shown by documentary evidence to have been correct, nor was any item of news or any expression of opinion which conflicted with the needs of the moment ever be allowed to remain on record. All history was a palimpsest, scraped clean and rein scribed exactly as often as was necessary.
for example: Biden actually criticized the travel ban implemented against China early on to slow the virus arrival to U.S. shores as “xenophobic.”
“This is no time for Donald Trump’s record of hysteria and xenophobia,” Biden said at an Iowa campaign stop leading up to the first-in-the-nation contest.
But he rewrites history ... 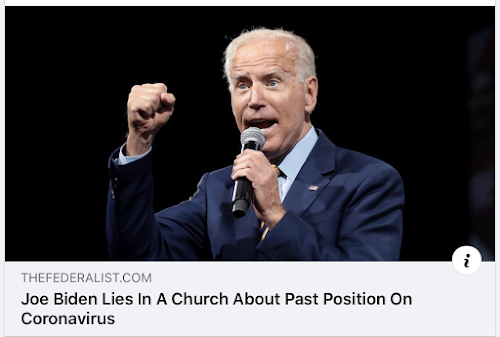 Does the Major Media correct him or continue the lie?
9. p. 50. "How's the dictionary getting on?" said Winston, raising his voice to overcome the noise."
"Slowly," said Syme. "I'm on the adjectives. It's fascinating."
He had brightened up immediately at the mention of Newspeak. ...The Eleventh Edition is the definitive edition." he said. "We're getting the language into its final shape--the shape it's going to have when nobody speaks anything else. When we've finished with it, people like you will have to learn it all again. You think, I dare say that our chief job is inventing new words. But not a bit of it! We're destroying words--scores of them, hundreds of them, every day. We're cutting the language down to the bone.
...It's a beautiful thing, the destruction of words.
...Don't you see that the whole aim of Newspeak is to narrow the range of thought?" In the end we shall make thoughtcrime literally impossible, because there will be no words in which to express it. Every concept that can ever be needed will be expressed exactly one word with its meaning rigidly defined and all its subsidiary meanings rubbed out and forgotten.
...Every year fewer and fewer words and the range of consciousness always a little smaller.
...How could you have a slogan like 'freedom is slavery' when the concept of freedom has been abolished? The whole concept of thought will be different. Inf act there will be no thought as we understand it now. Orthodoxy means not thinking,not needing to think. Orthodoxy is unconsciousness.
One of these days, thought Winston with sudden deep conviction, some will be vaporized. He is too intelligent. He sees too clearly and speaks too plainly. The Party does not like such people. One day he will disappear. "
----------------------------------
This is what I saw in WHOLE LANGUAGE where a rolodex of sight words were doled out by the fifth grade and in middle school the children could not sound out unfamiliar words. Or read books with those unfamiliar words. And by so limiting their ability to read those liberation pedagogists had limited their ability to think of anything except the doled out words they were allotted.
10. All over Oceania this morning there were irrepressible spontaneous demonstrations where workers marched out of the factories and offices and parted through the streets with banners voicing their gratitude to Big Brother for the new, happy life which his wise leadership had bestowed upon us.
________________
Does this sound to you a lot like the Mayor of Seattle calling riots "mostly peaceful" predicting "A summer of Love".
p. 62. "That's a first-rate training they give them in the Spies nowadays--better than in my day even. What d-you think the latest thing they've served them out with? Ear trumpets for listening through keyholes.

11. p. 70. Until they be one conscious they will never rebel, and until after they have rebelled they cannot become conscious.
------------------------------
Hillary Clinton: “Attempting to define reality is a core feature of authoritarianism. This is what the Soviets did when they erased political dissidents from historical photos,” declared Clinton in What Happened. “This is what happens in George Orwell’s classic novel Nineteen Eighty-Four, when a torturer holds up four fingers and delivers electric shocks until his prisoner sees five fingers as ordered.”
“The goal is to make you question logic and reason and to sow mistrust toward exactly the people we need to rely on: our leaders, the press, experts who seek to guide public policy based on evidence, ourselves,” she continued, seemingly misinterpreting Orwell’s message.
----------------------------
Doublespeak? I ask.
What about the mistrust the Left sows about the Police? Homeland Security? Our President. What is their purpose?
12. p. 80. "In the end the Party would announce that two and two made five, and you would have to believe it. (COMMON CORE MATH)
...For after all, how do we know that two and two make four? Or that the force of gravity works? Or that the past is unchangeable? If both the past and the external. world exist only in the mind, and if the mind itself is controllable--what then?
...Freedom is the freedom to say that two plus two make four. If that is granted all else follows."
12. p. 154. "Who cares?" she said impatiently. "It's always one bloody war after another, and one knows the news is all lies anyway."
Sometimes he talked to her of the Records Department and the impudent forgeries that he committed there. Such things did not appear to horrify her. She did not feel the abyss opening beneath her feet at the thought of lies becoming truths."
p. 153. "Do you realize that the past, starting from yesterday, has been actually abolished.
...History has stopped. Nothing exists except an endless present in which the party is always right. " 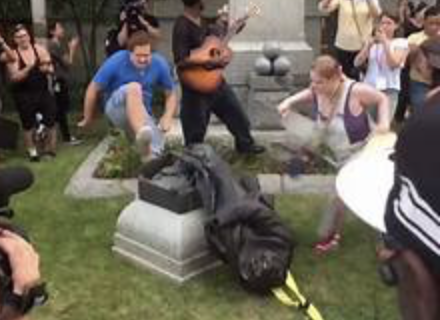 Posted by Sharman at 9:25 AM No comments: