Vashti Vann Jernigan, my fourth great grandmother, intrigues me. It was discovering the Indian heritage so long kept secret that started me on the research that led to my Serpents series of novels which now include Swimming with Serpents and Nest of Vipers. Her son, Joseph Jefferson Jernigan, my third great grandfather, is pictured below. 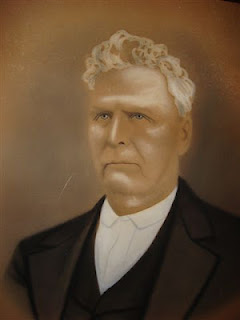 Vashti Vann was the daughter of Edward Vann who lived in Edgefield, SC  as is proven by census and court records, land and tax records, etc. accumulated by a cousin, Tammie Wood Nauguit, who is descended from Vashti's sister, Margaret.

Edward Vann b: 1720 was born in the Cherokee Nation, his parents were John Vann born about 1690 his mother was a Cherokee woman of the Anikowi Deer Clan.
(They hunted deer down on foot)! That is where Edward Vann met his first wife Mary Barnes b: 1720 (my fifth great grandmother). Mary Barnes was the daughter of Richard Barnes and April Tikami Hop b:1695 (sister of Old Hop, Echota Cherokee Chief) They lived in Hiawasee, GA.

April "Tikami" Hop ( meaning April Water) was the daughter of Big Turkey Cornstalk b: 1760 and UNK woman. He was also the brother of Okowellos Cornstalk born: 1740

When April "Tikami" Hop was three years old her parents were murdered by Catawaba Raiders, and she and her four siblings were left there to die because no one would take them in. Pigeon Moytoy, her aunt's husband, heard about this and went to Hiawassee and brought the children home to raise in the Cherokee Nation (he was the Emperor of the Cherokee Nation, and was also related to Cornstalk through his mother and his wife ). Visit WWW. My Carpenter Genealogy

Big Turkey Cornstalk b: 1760 was the son of Holesqua Opeechan "Stream" Cornstalk b: 1628 and wife Nonoma? Holesqua Opeechan "Stream" Cornstalk b: 1628 and was a War Chief in the Shawnee Nation which was basically everything east of the Mississippi but not the leader of the whole tribe. His son Okowellos Cornstalk was born in 1740, in Ohio. He was the only Chief of the Entire Shawnee Nation. The Shawnee had villages all over the place and intermarried with all of the Tribes, especially the Cherokee.

Our Great Grandparents hid the fact they were Native American. On DEC, 25th 1816, my ancestor, Robert D. Moseley sold 244 acres on Horns Creek, Edgefield, SC. to move to AL. to receive 40 acres of undeveloped property in AL. Robert and Margaret did this to protect their Children (14). They were well known in Edgefield, and lived next door to Edward Ned Vann and Mary King (Margaret and Vasti Vann's parents). They had heard about the Indian Removal and ran for their life, along with many other Native American Families. Edward Ned Vann and Mary Vann were listed on the Enumeration Roll of 1817. If they walked the trail of tears, I do not know. The reason they went to Alabama was because it was not a State yet. (It would not be for 2 years.) All of these families married amongst themselves to keep anyone from finding out.

Edward Ned Vann was a very wealthy Peach Farmer on the Savannah River, and the Whites wanted his property. Our family knew Andrew Jackson because he was also from SC. I have studied the Dawes Rolls and you would be removed if you had as much as 1/16 or less of Indian Blood.

Cornstalk and Tecumseh were famous for trying to send the Whites back to where they came from, and that's why no one on the Dawes Roll would admit to being Shawnee, much less related to Cornstalk."

Tammie is the Headwoman of the Appalachian Shawnee Tribe -Turkey Clan, and invited me to join the tribe, which I proudly did. You may also share this heritage. Tammie mentions Don Greene's books Shawnee Heritage I and II.  They give a fascinating genealogy (and history) of many prominent (and some not so well-known) Native Americans. Those books can be ordered through Amazon.