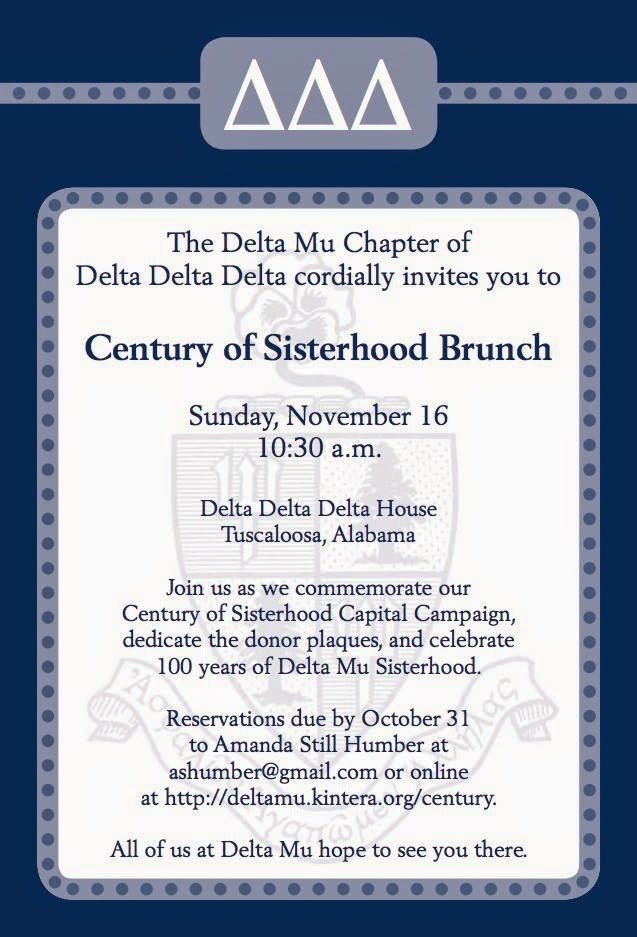 
Along with this invitation came many memories. I graduated from Dothan High School in 1968 and was excited to be heading off to the University of Alabama. I had been accepted on Early Admittance to Agnes Scott, but suddenly had an epiphany -- Agnes Scott College did not have a football team! I quickly came to my senses and applied to the University of Alabama, the only college I had ever seen, and that was because my father took a quick drive through Tuscaloosa after a doctor's visit to Birmingham with my mother! Daddy graduated from the University of Alabama where he was a Sigma Chi before he went to medical school at Tulane.
That summer I attended Freshman Orientation where, along with my roommate (whom I had never before met) and others on our hall, we took off down the halls to find others more experienced to ask what we really needed to bring with us in the Fall. At the first open door with a friendly face, we introduced ourselves and asked our questions. Imagine my surprise when I found that same friendly face at the front door of the unique round Tri Delt House during Fall Rush of 1968.  Beth "Pieface" Finch (Curtis) just happened to be President of Delta Delta Delta.

I had started dating one of my best friends' brother's best friend, Joel Ramsey, that summer. He had grown up just a few blocks away in the house at the intersection where I had learned my right from my left (up the hill to the left was the IGA and to the right was the Country Club). I admired that house every time we stopped there, especially at Christmas when his mother had the most beautiful Christmas trees in the bay window of the white Monterrey colonial at the top of the hill. He had transferred from the Citadel and was then a senior at the University of Alabama. He planned to attend Law School if the Vietnam War didn't call him first (a distinct possibility since his birthday brought him a low draft number).

I remember Rush almost as if it were yesterday. I had bought my clothes for Rush from Creamers Dress Shop selecting mainly earth tone dresses. Yes, we dressed for Rush and football games back then! In spite of the short skirts, I remember how very hot it was and how hard it was to be "cool" in the heat.

Joe was a Pi Kappa Phi who had fallen in love with every girl on campus with long hair when he transferred from the Citadel. Fortunately, I had long hair. He told me, "Lots of good sororities at Alabama, but you can't go wrong with First Circle." Those were the houses in the curve of Sorority Row ... Alpha Gamma Delta (that most Dothan girls pledged just as most Dothan guys pledged Sigma Nu), Kappa Delta (that my Aunt Elliece wanted me to pledge because Miss Kathleen Fuller, one of her Colonial Dames friends, had been one of the founders of the Chapter, she told me), and Delta Delta Delta, a sorority in which I had no connections. Except the chance meeting with Pieface. And yet, it became my first choice. I especially remember the big impression that Susan Cleage made upon me during Rush.

I, along with my new friends at Martha Parham Hall (all female at that time) who had gone out for Rush, all sweated it out, literally, through Ice Water Teas until Serious Night and then Squeal Day when we got our bids. Joe was waiting for me in front of the Tri Delt House with his best friend, Robert Grimes. He'd called my mother and already knew what I had pledged. I gave him a hug and then headed up the steps to embrace my new sisters.

Look at these girls! Wouldn't you want them as your best friends? That beautiful Round House and those wonderful young women became my home and family for the next four years. There I am on the second row third from the left. 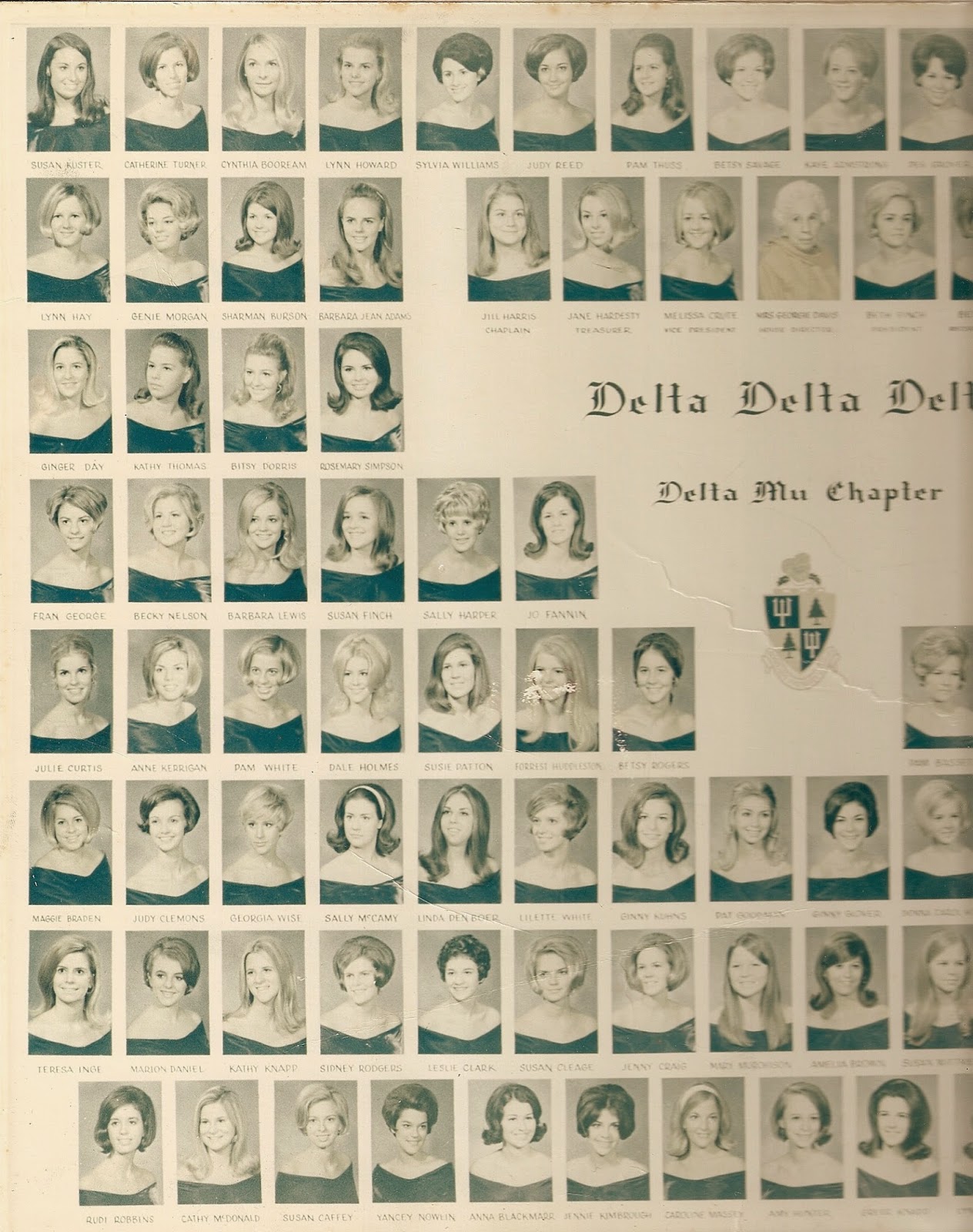 Ahh. Those were the days my friend... So young. So foolish! 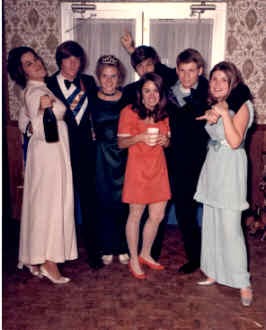 We elected Donna Dearman (Smith) president of our pledge class. As pledges, it was our responsibility to decorate the "Round House" for Homecoming.  Since I was dating a Pi Kappa Phi, I enlisted helpers from the Pi Kappa Phi House to come assist. Among those who came were John and Jake Bivona who, in later years, Yancey came to know quite well. Her  daughter married John's son.  Billy Barton met Susan Kuster and the two of them married. 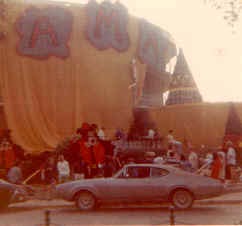 I am up the ladder here stuffing crepe paper in the chicken wire of our Homecoming float. From the safety of the ground below Theresa Inge (Beekman), Rondi Bates (Turner), Judy Clemmons, Judy Reed (Sheppard) et. al. provided moral support. Our song was from the Jungle Book, "The Bear Necessities," a play upon words, of course. Our football coach was Bear Bryant. As you can see, there is some age on these photographs. 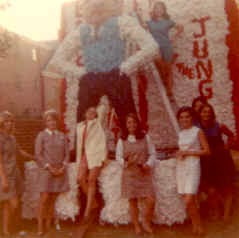 Anne Kerrigan (Sheppard) and I took the lead  pulling the float down University Boulevard past the Quadrangle singing at the top of our voices. I think Anne must have pulled her bear head off with the heat because, otherwise, I cannot imagine her leading our float in curlers! 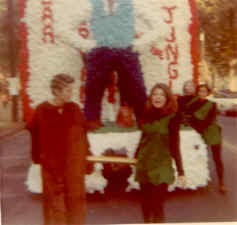 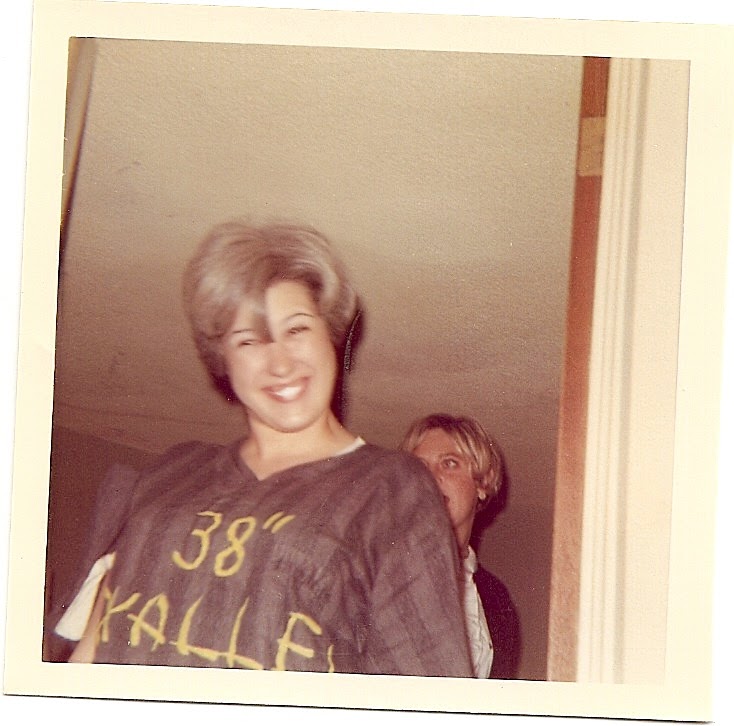 Mary Colquitt Ray (Evans) was our fantastic pledge trainer.  There was no hazing in Delta Delta Delta.  They teased us that there would be something terrible that would happen to us in the basement -- it turned to to be a party honoring the pledges! I had the best Big Sister of all! Laurie Stone (Cooper) is in the middle below with glasses on. 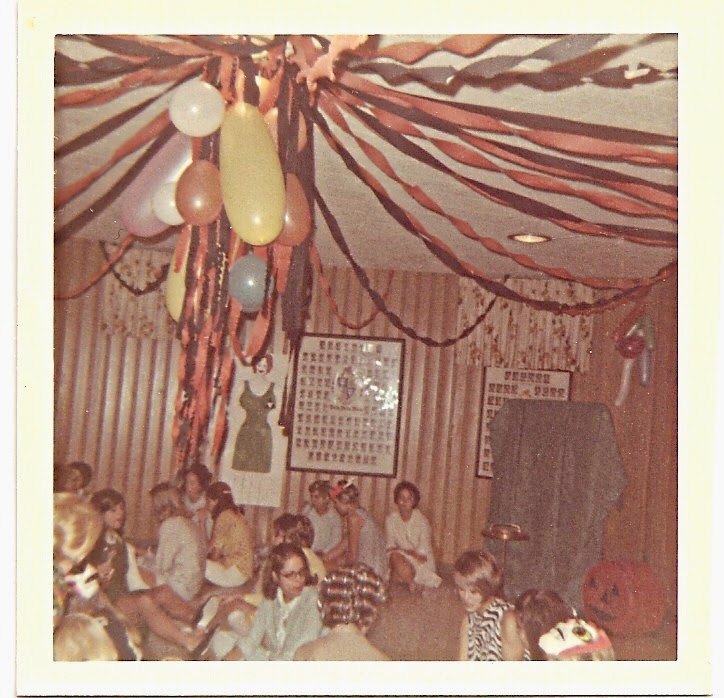 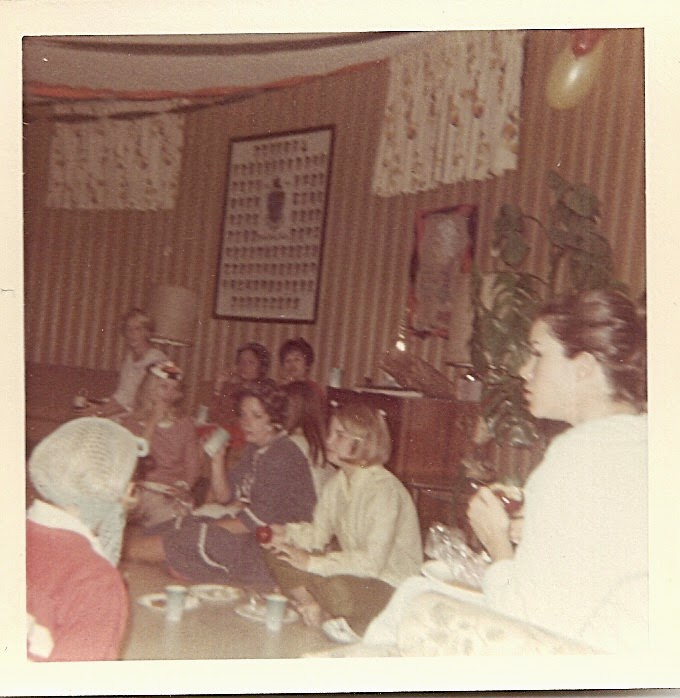 We rolled our hair in humongous curlers then -- and slept on them!!! This is me with my study board and the hair dryer I took everywhere. It worked, however, to capture the attention of the love of my life. We got pinned.  Joe got rolled in molasses and feathers and dumped on the front lawn of the Tri Delt House. I attempted to pour water on his fraternity brothers from the balcony (and accidentally hit him. He hasn't forgotten!) 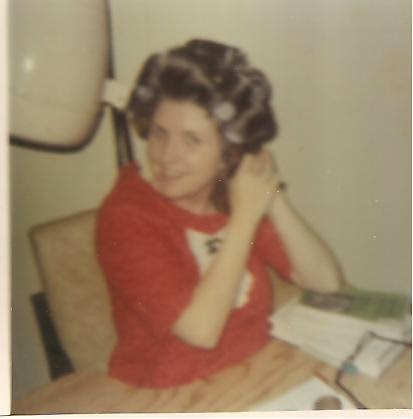 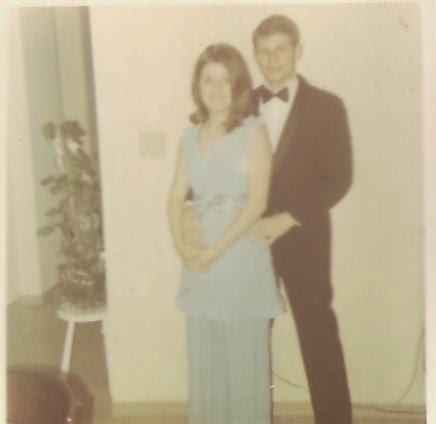 Riverboat at the Pi Kappa Phi House. Who could resist that guy? Not me!

It was much more fun being on the other side of Rush. Rather than Fly Delta we sang: Tri Delta! 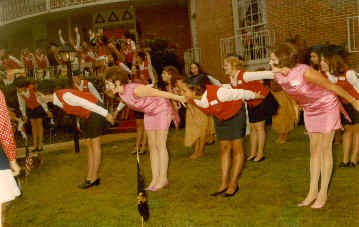 Donna Carol Hipp did a fantastic job with this!

I wish I could remember the words to the following song... 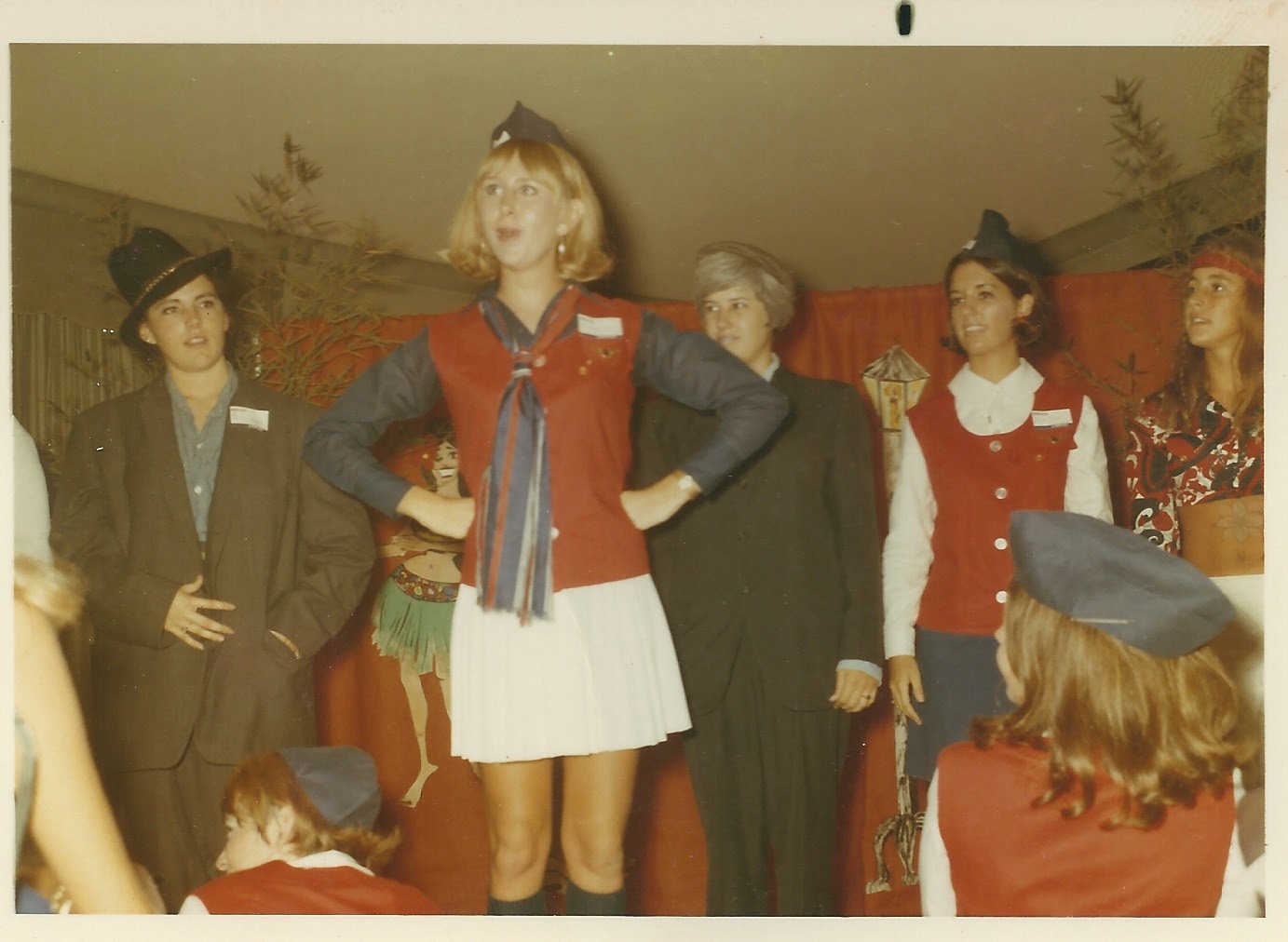 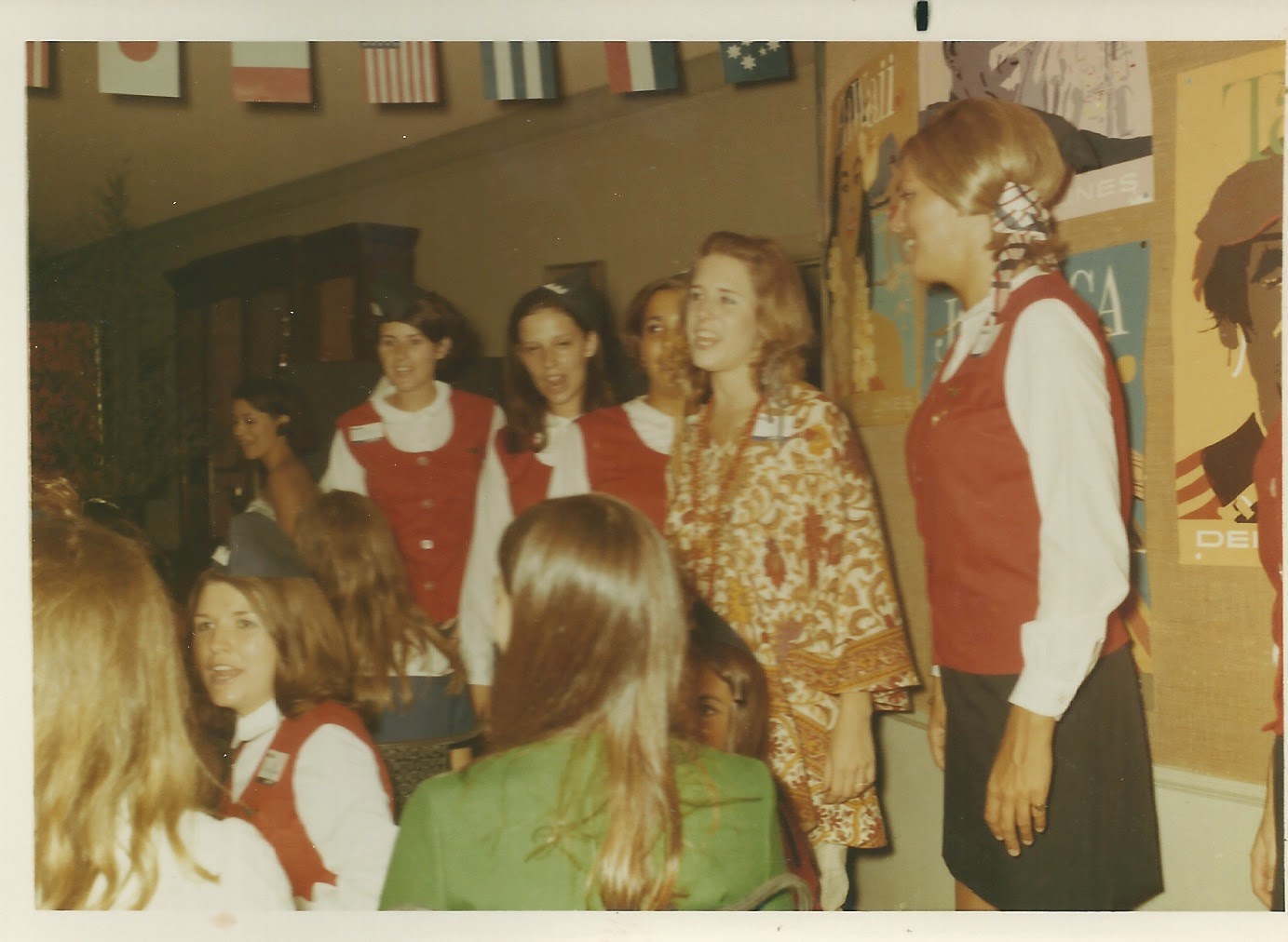 There I am below in the middle on the balcony singing our Serious Night song. 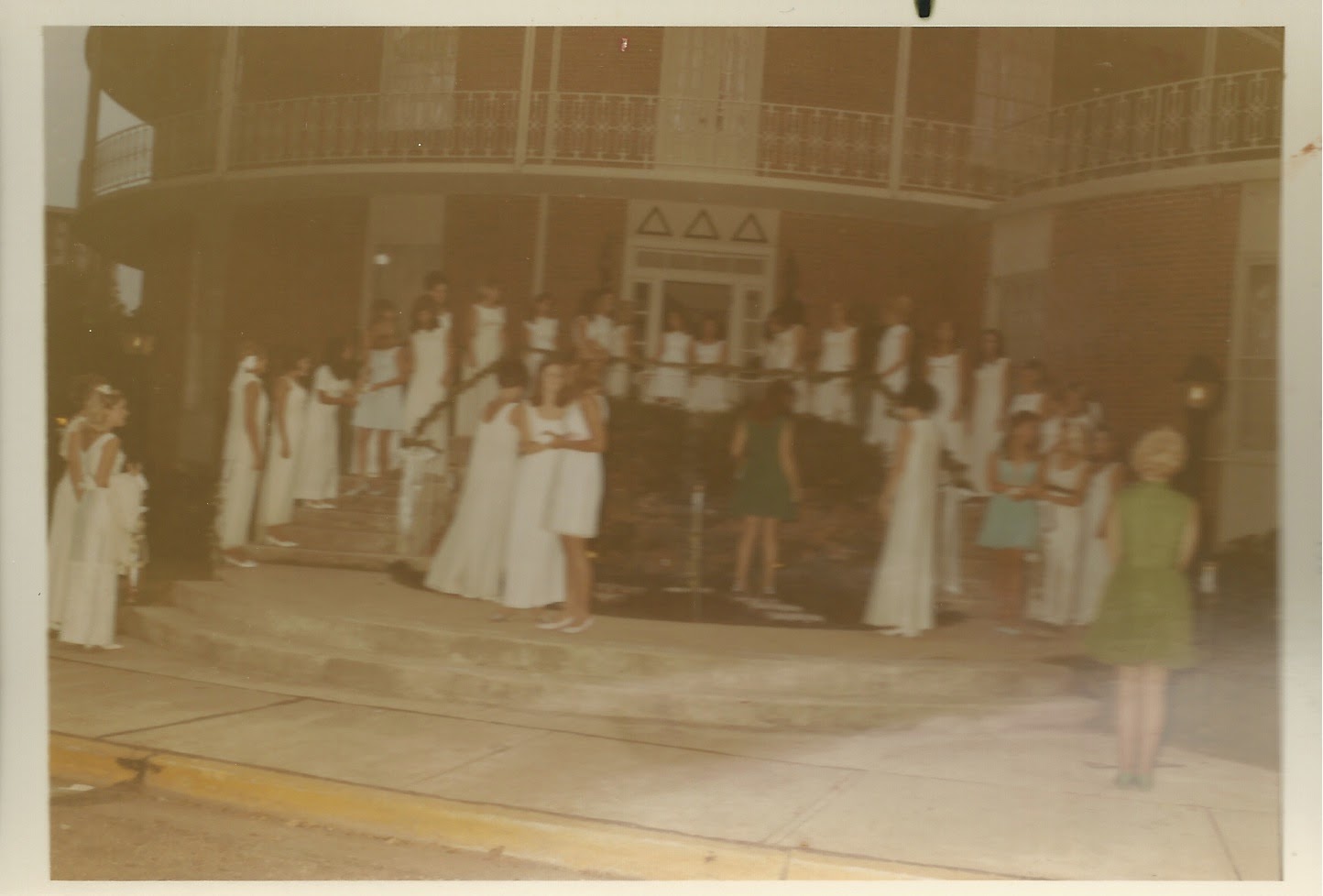 I returned to my sophomore year in 1969 engaged. Joe was a freshman in Law School. We married November 8, 1969. Alabama had an away game that weekend. So, I only experienced two Rush seasons, one as a rushee and one as an active. By the time the 1969 Homecoming arrived, I stepped out of the married students dorm, brand new Rose Towers on the Black Warrior River, excited about actually seeing a Homecoming Parade and saw a car with shaving cream all over it decorated stem to stern with "Just Married". "Look, Joe," I said. "Someone else just got married!" "Sharman," he said. "That's OUR car!" Our groomsmen and bridesmaids had been real busy during the night doing something we had outsmarted them on doing on our wedding day. (They had to do it twice because the first time it rained and washed away all their hard work!) 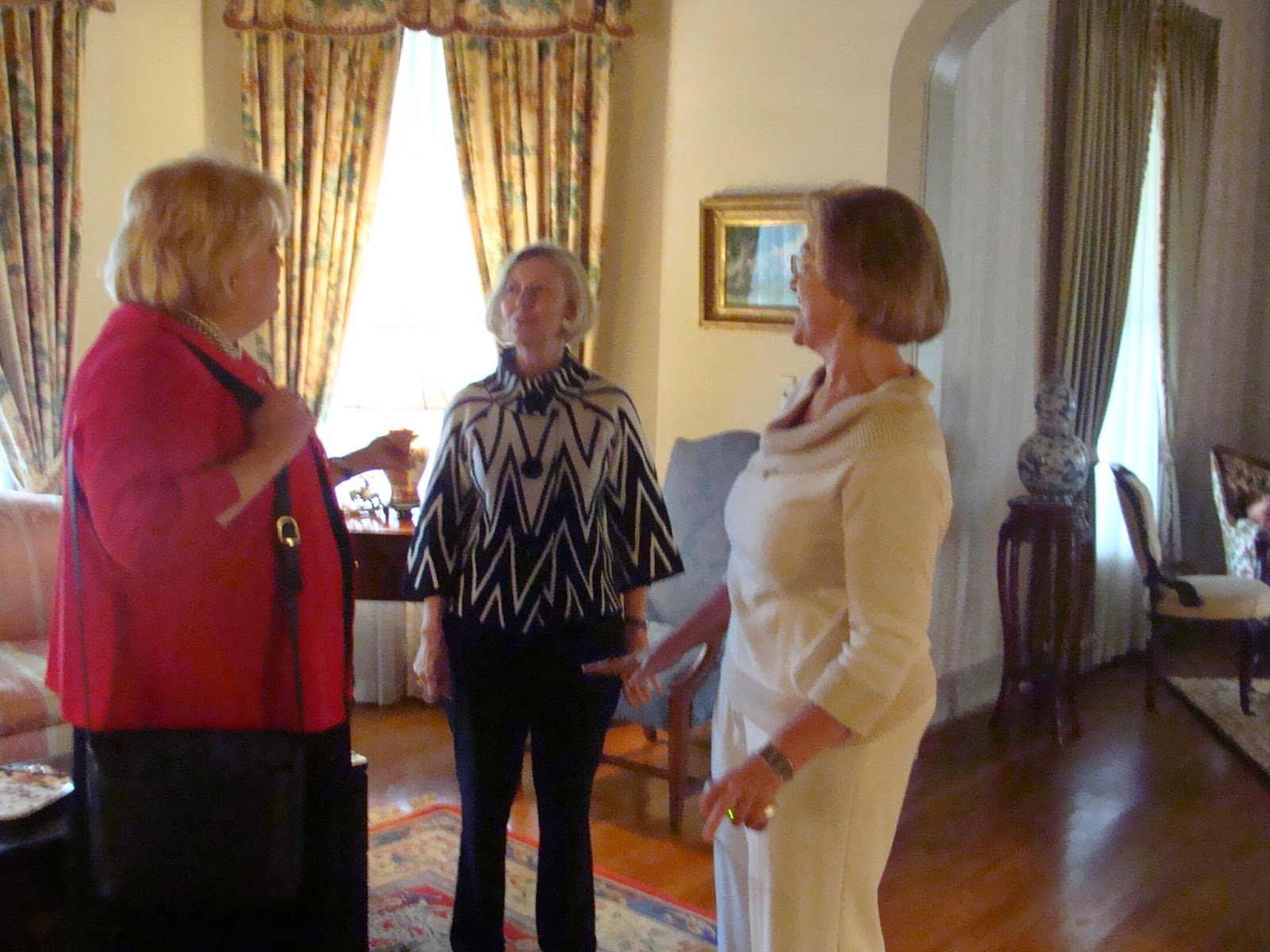 Rondi Bates (Turner), Margaret Lambreth (Fuller), Yancey Nowlin (Trucks), and I got to visit in Margaret's beautiful home in Alex City just a few years ago. Facebook has brought many of those Sisters I had lost touch with over the years back to me. Those friendships remain very special.

Those were gilded times. The Round House is gone. But in my mind I can still experience running out the back door from Harris Hall, hair in curlers, with my roommate Rondi on Friday night for the tuna fish and brownies with the sound of Otis Redding (Sitting on the Dock of the Bay) drifting from an open balcony door of the Tri Delt House across the street mixed with Steppenwolf (Born to be Wild) coming from an open KD window and the Supremes (Love Child) floating on the air from somewhere in the distance, the brisk autumn air, the anticipation of band party at the Pi Kappa Phi house, and the excitement of tomorrow's football game in Denney Stadium only about 200 yards away.

On November 16th, 46 years later,  I will return to a different Tri Delt House but one I was privileged to make a small contribution toward building. You see, I had a debt to repay. They welcomed this anxious South Alabama girl and gave me the security of a family in the middle of a huge student body my first time away from home. My Tri Delta sisters encouraged me, supported me, and have always made me proud to be always and forever a Tri Delt. 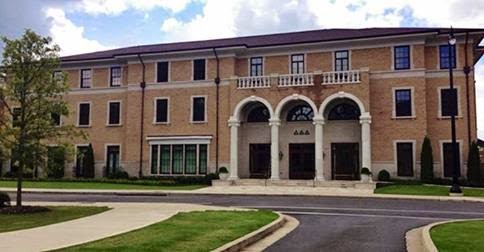 Delta Delta Tri
By and by,
You'll know why
This girl is a Delta Tri.
Little Shy
Loves her guy
And he loves his
Delta Tri.

P.S.
Three children and five grandchildren later, Joe and I still live in the home I admired when learning my left from my right. I'm the one with the obligation of putting the Christmas tree in the bay window.
Posted by Sharman Ramsey at 7:36 PM
Email ThisBlogThis!Share to TwitterShare to FacebookShare to Pinterest