Acknowledgements for ON TO ANGOLA 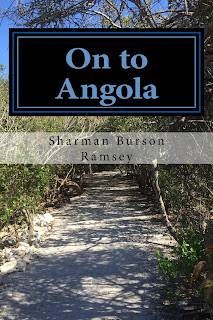 ON TO ANGOLA is Black History, Native America History, Florida History for 1821, the year Florida came under control of the United States from being a Spanish colony. Andrew Jackson was the first territorial governor. He came with a history, a goal and a bias. He made a formidable enemy. As a writer of Historical Fiction, I attempted to tell this story with an appreciation for those whose story has been swept under the carpet for nearly 200 years. It is not a pretty bit of history.

ACKNOWLEDGEMENTS
Perhaps one of the best parts of writing Historical Fiction is the people you meet who share your interests. After Mercer University Press published In Pursuit, I was surprised by these emails by Uzi Baram, Professor of Anthropology and Director of the New College Public Archaeology Lab in Sarasota, Florida.
I want to share them with you so that you can see how encouraging a fellow searcher can be.

Dear Sharman Burson Ramsey,
I am writing to let you know that I enjoyed reading In Pursuit.
I have been a researcher with Looking for Angola since 2004, and seeing your inclusion in the novel of the previously nearly erased community on the Manatee River thrilled me. As an academic, I have written scholarly work on the project and the early 19th century maroon community; I have given many public lectures and there are videos on and about the project. But your novel does what the archaeology and history does not: brings the community to life within the larger currents that crossed the Atlantic and the Gulf of Mexico. Thank you. The history matters greatly and my hope has been to see many representations of the search for freedom on Florida's Gulf Coast.
In addition, I share your interest in making the 1816 events at Prospect Bluff on the Apalachicola River better known. For the 200th anniversary of the fort's destruction, I have a Florida Humanities Council grant to digitally reconstruct the Negro Fort and the landscape for Angola. Shortly after the anniversary, I will lead a presentation on the work at Apalachicola and Bradenton (details still being worked out). Although it is quite early, I hope you can keep my project in mind as you hear about other commemorations and, hopefully, you can come to one of the FHC sponsored presentations.
Sincerely,
Uzi Baram
Professor of Anthropology
Director of the New College Public Archaeology Lab
New College of Florida
5800 Bay Shore Road
Sarasota, FL 34243 USABaram@ncf.edu
https://ncf.academia.edu/UziBaram
When I began writing On to Angola, friends of ours, Robert (archaeologist) and Rezi Hurst, my husband, Joel, and I took a trip down to South Florida with the Florida Humanities Society. While in the area, I called Uzi and he delighted us by taking us to the areas where he and Vicky Oldham have come to believe Angola actually stood.
Sharman,
----------
A pleasure meeting you, your husband, and friends. I hope my tour of the sites was helpful. I look forward to more discussions. Below is one strand.
One of the questions, I got asked at public presentations: Who might have been at Angola?
Filling in their biographies (see, for instance, Jane Landers African Creoles) suggests these men connected with Angola:
Abraham (1789-1890?)
Harry
John Horse (ca. 1812–1882)
Louis Fatio Pacheco (1800-1895)
More intriguing, when the maroon communities on the Florida Gulf were destroyed in 1821, about 300 people were taken north. There were law suits regarding ownership. There are three " Descriptive List of the Negroes brought into the Creek nation by a detachment of Indian Warriors under the command of Col. Wm. Miller a half breed Indian (Viz)" found at http://www.africannativeamerican.com/crkslaves.htm (accessed March 2016), which provides names of those at Angola. Looking through these records, you will find Jim (Richard, Augustine, formerly the Estate of Genl. Washington), Nancy and her three children, among the others.
Rosalyn Howard located a list of of “foreign Negros” in the Bahamas since 1821 and two of the names overlap:
Sipsa/Sipco Bowlegs
Peter/Peter McQueen
Both escaped as the Coweta took captives north and escaped to Andros Island - the part of the history that is inspiring.
Sincerely,
Uzi
--------------------
We all believe this is a bit of our history that has been glossed over. It is a story that needs telling.
Because of the hard work of Uzi Baram and Vickie Oldham who have done the hot work of digging and discovering, I long to make these events come alive and remember the people who lived this story. These people in Angola touched my heart. The book is dedicated to them so that their memory will not die.
Thank you for your encouragement, Uzi.
With the introduction of the orphans rescued at Fort Mims in my novel, Swimming with Serpents, I set out to craft a story for each of them. Inspired by the events at Angola, I realized that Andro’s story must also involve Angola. Discovering a twin who had been raised in slavery brought the poignancy of a family ripped apart to combine with the raid on Angola by the Coweta Indians. Add to that the horror of any mother to have a child ripped from one’s arms and you have a human tragedy that could not help but touch any heart.
In writing Historical Fiction, one cannot truly know who was exactly where at one time or what they exactly said, unless it is recorded in official records. There is much that public figures do not want known, of course, and so much is speculation.

Gasparilla is legend. Or so they say. If that is true, why is there a Gasparilla Island, a Captiva Island, a Sanibel Island? So, Gaspar finds a place in this novel and in my imagination. Black Caesar is mentioned as an authentic participant in Haiti and pirate in the Gulf of Mexico. Creatures in the Okefenokee Swamp. So the legends say.
I have attended talks on Jackson’s Militia and left wondering what happened to the Creeks who survived? That is how I began following Peter McQueen. Finding a genealogical connection with Josiah Francis made through my fourth great grandmother, Vashti Vann Jernigan, Cherokee, whose people were taken away on the Trail of Tears, made this story even more important to me.

Just as Native American History has been overlooked so has Black History. In this book, the two intertwine.

Records mention the gathering of people to task the Coweta to make just such a raid down into the peninsula of Florida. Weatherford accompanied them. Peter McQueen was a true target of Jackson. Did the two meet? There is no official record of that, but it is said that Peter McQueen did die on an island in the keys. And if they did meet, what really happened? One can only speculate from what one knows about the character of a man what his actions might be.
But that is Historical Fiction. Fact meets fiction.
I hope you enjoy On to Angola.
Sincerely,
Sharman Burson Ramsey
February 1, 2018
Panama City, Florida