The Clapham Sect influential reformers in the anti-slavery movement 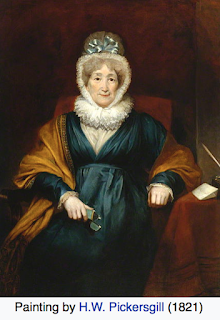 The Clapham Sect
Hannah Moore was a leader (serious influence on Sabrina Stapleton, major character in On to Angola)

The third book in the Creek Indian family saga begun with Swimming with Serpents has taken me on a new research adventure. I am tackling the issue of slavery and the anti-slavery movement in the late 18th and early 19th century. The Clapham Sect, founded by evangelical Anglican pastor in the Clapham section of London, Henry Venn, figures prominently in this movement. According to historian Stephen Tomkins the Clapham sect was "a network of friends and families in England, with William Wilberforce as its center of gravity, who were powerfully bound together by their shared moral and spiritual values, by their religious mission and social activism, by their love for each other, and by marriage".
Members of the Clapham Sect included:

This group of men and women had influence far beyond England's shores.

See also: the Power Point I did for a Sunday School Class on the anti-slavery movement.
https://sharmanbursonramsey.blogspot.com/2017/02/sunday-school-power-point-on-clapham.html
Posted by Sharman at 3:28 PM