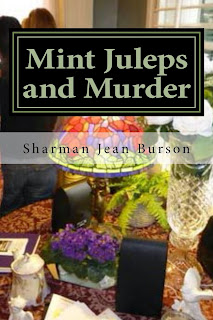 Mint Juleps and Murder is the second in Sharman Ramsey’s Mint Julep Mysteries Trilogy. When most southern women in their sixties are sipping sweet tea and fanning themselves with their church bulletins, Dabney Rankin and Sophia Ransom, two widowed sisters, find themselves living life in the fast lane sipping mint juleps.  Their TV show, Partying on the Plantation, has succeeding beyond anyone’s imagination.  Since both sisters lacked culinary skills, their initial success was a result of some disastrous missteps in the beginning that sent the show to the top in the ratings chart.  The show was such a hit that they had no difficulty in attracting celebrity guests who really can cook to join their zany cast. Their nonexistent gardens complemented their nonexistent culinary skills, but when news got out that they were going to film a TV series in the Palmer, Alabama, the whole town wanted to get in on the action. Harvey Banks, a retired judge and the head of the Master Gardeners in Cox County was among many who came to the sisters’ rescue.  Betty Lee Simmons, the wife of the local Episcopal priest, was one of the few who came without a hidden agenda. Frederika Amos, the widow of a prominent doctor, seemed to be more interested in Harvey than in gardening.  Her sister was married to Harvey’s twin brother, Senator Hartwell Banks. With the enthusiastic support of the whole town and soaring ratings, what could possibly go wrong? Everything, to put it mildly.

Dabney is not only haunted by dreams, she begins to attract unwanted attention. Dabney learns that Ruby T., a local icon, has managed to get Sadie Summer to agree to come to Palmer to do a charity review. The fact that Dabney is already sufficiently challenged doesn’t keep her from bribing Ruby T. to letting her join the review.  Ruby T. is used to telling it like it is, “You skinny white girls just can’t carry it off.”  Ruby patiently tries to teach Dabney attitude and moves and tells her she has to get in shape. This leads to Dabney’s jogging which leads to Dabney being grabbed from behind, chloroformed, and dumped in a well. She is rescued, only to have another attempt on her life as she is driving Dabnabbit, her turquoise golf cart with pink leather seats, rhinestones around the top, and pink glow bars. Her children thought this was the perfect sixtieth birthday present. The shot missed, but now family and law enforcement combine to protect our heroine.  Drugs, a suicide that may not have been a suicide, and a Pinkerton trunk may be clues, but no one can connect the dots. Why is someone out to kill her?  Another attempt on her life, a surveillance team that spies on a philandering priest, and a successful kidnapping lead to a surprising ending.  Ramsey uses that sleigh of hand that mystery writers use to leave their readers shaking their heads and musing, “I didn’t see that coming.” Amid barbeque, Soul Sisters, and dancing, readers will laugh with Dabney as she cooks and dances her way to the top of the charts and into her readers’ hearts.
Posted by Sharman Ramsey at 10:20 AM
Email ThisBlogThis!Share to TwitterShare to FacebookShare to Pinterest