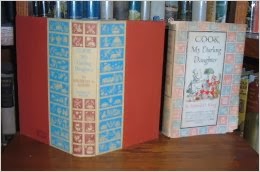 I was first introduced to this book by my dear friend and fellow BOOB (Bunch of Old Broads), Julie Cheshire, when she prepared Enzio Pinza's Spaghetti recipe to serve us at her turn to host our luncheon group. Pinza starred in South Pacific. The author, Mildred O. Knopf, was the wife of Edwin Knopf who was a writer and Hollywood producer as well as the brother of Alfred Knopf who just happened to own a book publishing company. Mildred was the premier hostess in Hollywood.

I am impressed with the foreword to this cookbook mainly because it is written by Wendy, the daughter with whom she co-wrote this cookbook. I am struck by the impact of the woman in her kitchen on her children. So many young women seem to struggle with their  place in the world. Older women who are to be teaching the younger women to "love their husbands, to love their children and to be keepers in the home," are themselves just as conflicted.

Rather than diets and lifestyle lifts, perhaps more time in the kitchen with those entrusted to us to be our legacy might be an answer. One thing is for sure -- we are all going to die. What did we do with the time we have? Perhaps we can have it all...just not all at one time. Anyway, with these thoughts, I share with you the foreword to the cookbook to which my dear friend referred me...

One dreary winter afternoon when the endless gray rain poured against the windows and flooded the streets, my three little girls and I retreated to the kitchen to make fudge. When the rich glossy chocolate had been beaten into creaminess, poured into a pan for cooling, marking and eating, we sat down at the kitchen table together for our treat. The gay impatient chatter of the children made the thrumming rain outside seem far away. It was then my little four-year-old, smeary with chocolate, gave me my idea for this foreword to my mother’s cookbook. “I love you, Mommee, she said, “cause you make good things.”

Love and food? Are they allied I think so, especially if you can cook with care and serve with affection. Whether you cook every day, cook on special occasions, or only supervise the meals in your house, it is a form of giving from you to your family and friends; it is a tangible and creative expression of yourself. Love of family. Love of friends. Love of food and all the pleasant ways in which it may be cooked, served, and eaten. These were and still are a part of the hospitality that flourished so warmly within the old white stucco house with its red-tiled roof ad many rooms where my two brothers and I spent our childhood. Apparently, this house could absorb squads of hungry children, Sunday guests of all ages who came to lunch and stayed all day, and crowds of fifty dining at midnight after a concert on homemade pate, cold salmon with cucumbers, chicken in wine and whatever else the laden table could hold. What made this house such a pleasant haven for so many people I am sure it was the spirit in which the hospitality was given; the care with which the home was kept.

The garden bloomed with roses; apricot trees were carefully espaliered against a sunny brick wall. Here one found fragrance, pleasure, and respite, as was intended.

At the west end of the house, endlessly busy, our high ceilinged, awkward old kitchen seemed to have a life of its own. There, despite the distances from sink to stove and the inaccessible cupboards piled almost to the ceiling, my mother’s talents bore fruit. Often, in the center of all the activity, was my father, poking into pots, turning down flames, examining, enthusing, often predicting dreadful happenings if the roast remained in the oven another minute longer! It was a good place to be, our kitchen. Here, more than in our temperate California skies, the year displayed itself. Birthday cakes with pink and white layers and sentimental frosted messages; the Easter ham, glazed and elegant and garlanded with pansies which surprised us all one year when they proved to house a large family of ants; an afternoon spent making Christmas cookies with pungent gingerbread bodies and raisin eyes for my brothers to hang upon the tree. No one would have dreamed of dismissing my mother as “just a housewife.” She was the pride of the household, the purveyor of delicacies relished by us all, and, for a little girl, someone to be admired, followed about, and emulated. Just as I knew that someday I would wear lipstick and high heels, I knew that I would love to cook.

To my mother who cooked with love and to my father who ate with affection and gusto, I owe a debt of gratitude. There is real pleasure and satisfaction for me in cooking for my family, entertaining our friends and giving from our kitchen to all who care to come. This book has been written in the hope of giving you that same pleasure and to further your efforts when you go to the kitchen to “make good things.”
Posted by Sharman Ramsey at 5:42 PM
Email ThisBlogThis!Share to TwitterShare to FacebookShare to Pinterest