In the Mint Julep Mysteries Trilogy I address the problem with Homelessness. Here are excerpts from several Chapters: 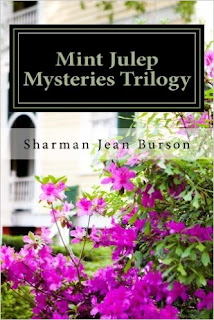 Everybody laughed. The world famous gardens around Waverly, the plantation house that inspired Partying on the Plantation, our Dishing It Network Show, started with just such an observation.
“I remember the allotment gardens I saw throughout Europe. If we divide the land around the central facility into small garden plots, our tent city residents could grow fruits and vegetables to cook in the soup kitchen at the community center, give to the schools, and sell at a farmer’s market to make a little money.” (p. 419 Mint Julep Mysteries Trilogy (Sharman Jean Burson)
The result of that big event to raise money for the homeless, hopeless, hungry and helpless was the Garden:
Book II, Mint Juleps and Murder
Chapter Two

I got up early and turned on the Weather Channel praying for the rains from the predicted very early in the season hurricane to hold off. Fortunately, the welcome sun now shone through in a break in the weather bands for the long planned Victory Garden dedication. I prayed it would last long enough for the judges’ decision and my surprise announcement, but from the look of the dark clouds rolling in over the needled pines, I had my doubts.
We considered cancelling, but decided that wouldn’t be fair to the gardeners who had worked so hard. The winds and rain of the approaching hurricane would beat the vegetation down and spoil the effects they had worked so hard to achieve. Julio drove the limousine under the arched sign where my eyes lingered above the pillared entrance. I was as excited about the announcement of the name of the gardens that sign would proclaim to the world as I was about any of the prizes we would award.
As I walked, with Elvis and Ralph escorting me, to the stage from the limousine where Julio would wait for me, I heard many foreign languages mingled with the distinctive Cox County drawl of the locals. A large Hispanic population now lived in Cox County to plant trees on the pine plantations, so the many Spanish conversations didn’t surprise me. The now familiar media with cameras and microphones arranged themselves about the stage, once again a flatbed trailer, from which Ruby and I would speak. They were eager to find out who would win the one thousand dollar first prize for the best garden and another for the best garden shed.
I blinked with the barrage of flashes from the media lights wishing the photographers would focus on the people to whom these gardens were dedicated rather than me.
“The sin of pride was upon me,” I mouthed to myself before standing to take my place on the stage the morning after taping those shows. I recalled the opening words by Atlanta Constitution writer Celestine Sibley in her book A Place Called Sweet Apple as I stepped forward to the podium on the stage.
I wore sunglasses today. The effects of those strawberries still pounded behind my eyes. My heart filled. I stood alone, dressed in a royal blue A-line fighting the sporadic gusts of wind to keep my huge white brimmed hat, on my head. I looked out at the lush allotment garden before me and the crowd that had gathered for the awards ceremony. Ruby and the event planners had decided against rows of metal chairs that would just have sunk down in the soft dirt since they could not predict the size of the crowd.
These individual allotment gardens brought pride not just to me, but to the many veterans who originally formed a large part of the tent city of homeless who once camped in this field needing help to find their way home. Now those who had accepted the challenge stood proudly in their gardens awaiting the awards announcements. We called these Victory Gardens to honor them and their service. Today I represented the major sponsor of the Victory Gardens, the Dishing It Network and Sister’s and my award winning cooking show Partying on the Plantation. Only Sister wasn’t there.
I glanced over at the sheet covered sign above the pillared entrance and immediately looked down at the Soul Sisters -- Bernice, Florence, Betty Lee, and Faye Lynne, also wearing sunglasses to cover her bloodshot eyes-- standing in the crowd before me. Ruby sat on the stage behind me prepared to present awards. For the moment, in spite of the expected storm, it was a beautiful day. A glorious day. A perfect day.

EPILOGUE
Six Weeks Later
Today was one of those days you wanted to capture like a lightning bug in a bottle so you could enjoy the glow over and over. It began with the dedication of the Victory Garden, a garden ravaged by a storm, but still standing with beauty continuing to burst forth. Instead of honoring a dead soldier, we honored a live hero. We uncovered the sign that said Kendrick Newkirk Victory Garden.
Bernice hasn’t let go of her man since she got out of the hospital. He’s joined Bernice down at Soul Sisters as pastry chef, a job no one ever knew was his second choice for a profession ever since was five years old and helped his grandmother bake a chocolate layer cake. Having a background job suits him for the moment, but he spends lots of time at the Victory Garden and in the tent city. Kendrick has been where they’ve been and talks their language. He’s good at getting them to the services they need so they can get better and go home. Like he did. (p. 572, Mint Julep Trilogy, Sharman Jean Burson